Coronado Island has some of the most sought-after beaches in the US, right across the harbour from San Diego. And rightly so, it’s one of the most beautiful stretches of the Californian coastline. This resort city is popular among surfers and sunbathers, but it’s more than just sparkling white sand beaches. Did you know that even though it’s commonly referred to as Coronado Island, it’s actually a peninsula? Coronado is also a port to US navy aircrafts (North Island Naval Station), providing specialised training to military and navy personnel, such as the US Navy SEALS (Naval Amphibious Base Coronado). 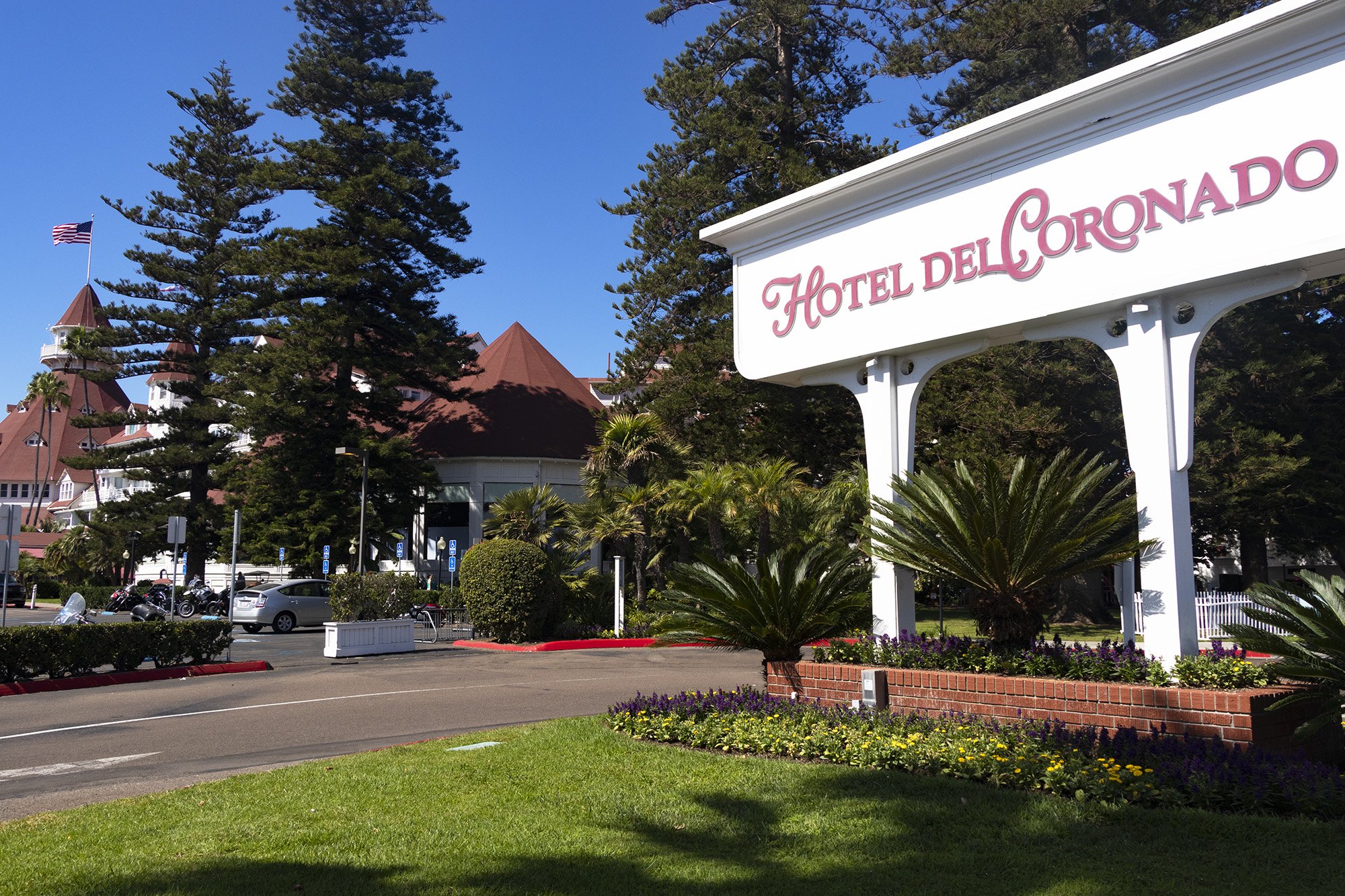 Visiting Hotel del Coronado has to be at the top of your list for things to do in Coronado. Whether you’re a guest or not, you can’t miss the signature red Victorian roofs and Art Deco interiors of Hotel del Coronado. The historic luxury hotel is something of an icon of Coronado and has hosted a long list of celebrities, presidents and royalty. You may even recognise it as the hotel in “Some Like it Hot” starring Marilyn Monroe!

The Del was built in 1888 and is the second largest wooden building in the US. This, and its rich cultural significance contributed to its designation as a California Historic Landmark in 1970 and a National Historic Landmark in 1977. And if this wasn’t enough, there’s also a not-so-little hidden gem here. Keep your eyes peeled for the Dragon Tree at the entrance of the hotel. It’s native to the Canary Islands and is over 130 years old!

Hotel del Coronado is said to be haunted by Kate Morgan (aka the Ghost of Hotel del Coronado) who died in 1892. She’s thought to have taken her own life after waiting 5 days for a lover to join her, but who never did. They say her ghost haunts the hotel hallways, and there have been sightings in the hotel and on the shore. You can even stay in her room (if that’s your thing)!

You can’t go to Coronado and not visit at least one of its beaches. The golden sand beaches are famous all over the US for their sparkly mineral mica and have been named some of the best in the country. The beaches in Coronado are perfect for swimming, paddle-boarding, water-skiing, surfing or simply relaxing in the sun. 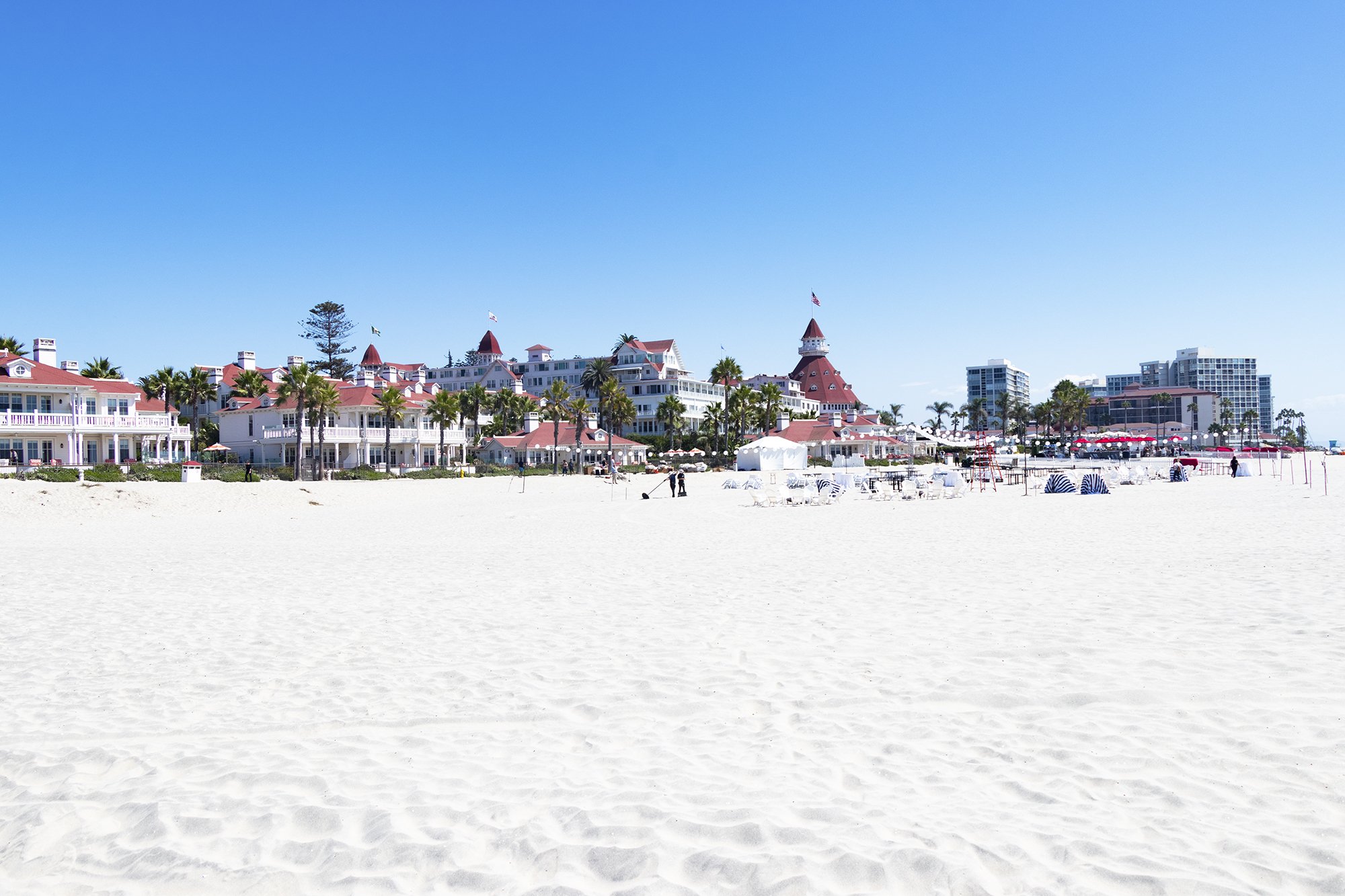 This is the perfect place learn more about the unique history, architecture and culture of Coronado. Located inside the Historical Association building, you can find a collection of more than 20,000 photographs, books, artefacts and newspapers dating back to 1880. There are also regular exhibits about moments of historical significance in Coronado. Did you know Coronado was the birthplace of naval aviation in the early 1900s? Not to mention it has a strong connection with the military! 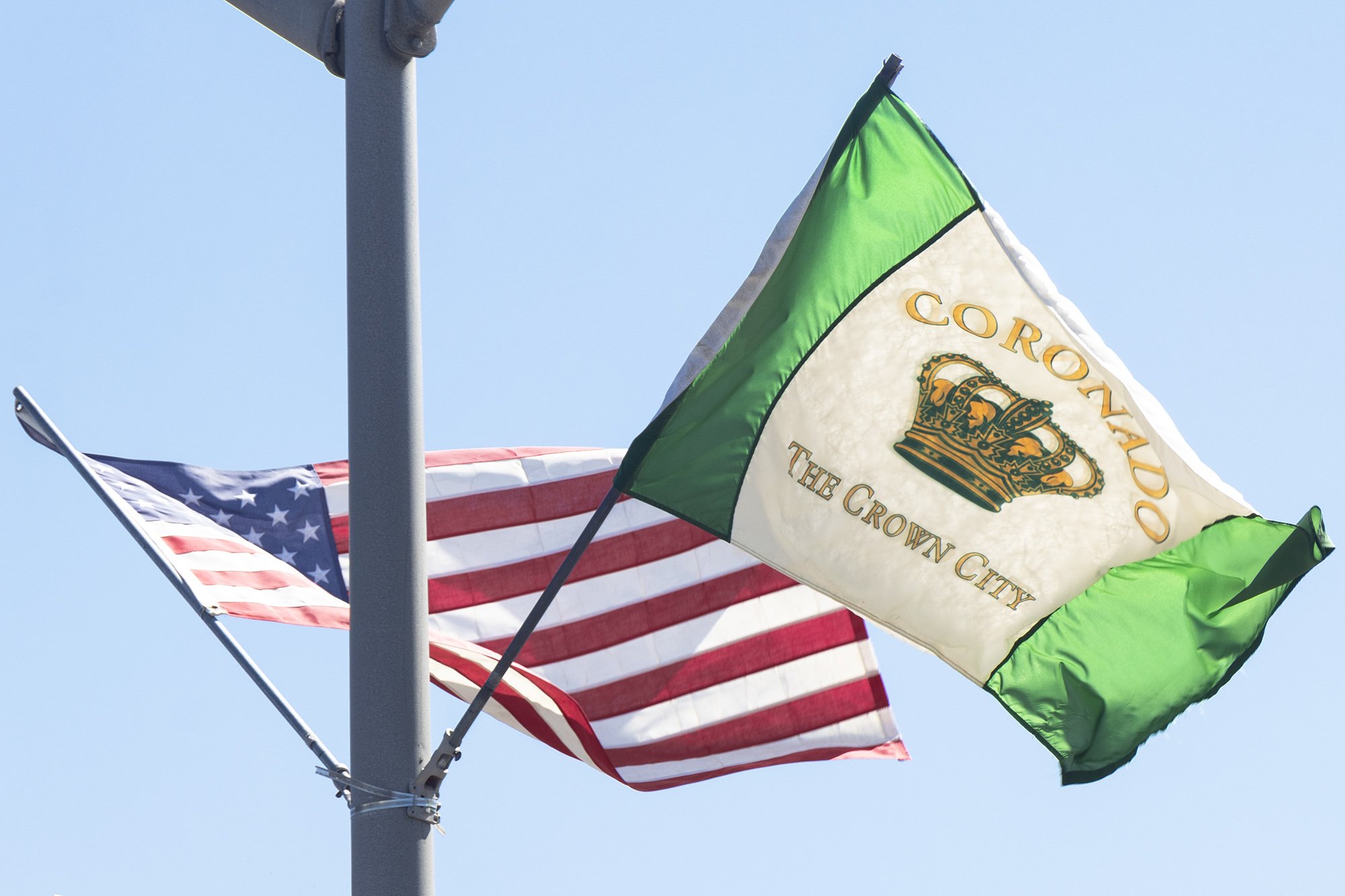 If you’re visiting on a Tuesday, on your list of things to do in Coronado has to be going to the Coronado Farmers Market. You can find the it right by the Ferry Landing. Farmers from all over San Diego County come here every Tuesday from 2.30pm to 6pm to sell fresh flowers and locally sourced organic produce. Although it’s a fairly small, the Coronado Farmers Market boasts with loads of colours and flavour – plus it has some of the most amazing views of the the San Diego Bay and skyline in the background! 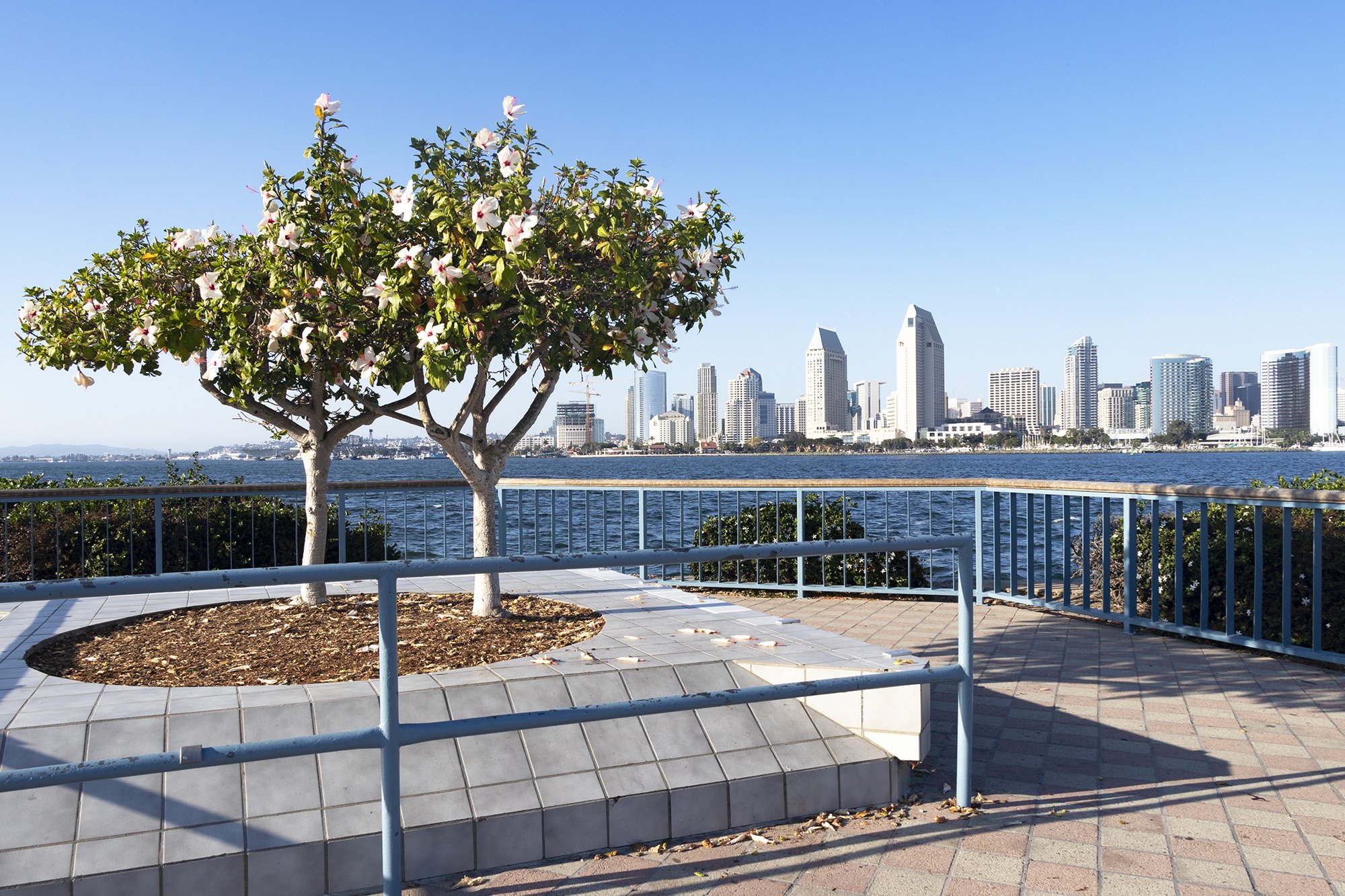 Also next to the Ferry Landing is Centennial Park. It was inaugurated in 1986, on what was the 100th anniversary of Coronado’s founding (hence its name). This is actually the original site of the Coronado Ferryboat Terminal, which transported passengers and cars between San Diego and Coronado from 1886 to 1969 (when the Bay Bridge opened). Now, the park is the perfect place to walk along the bay and observe the Downtown San Diego skyline on the other side. 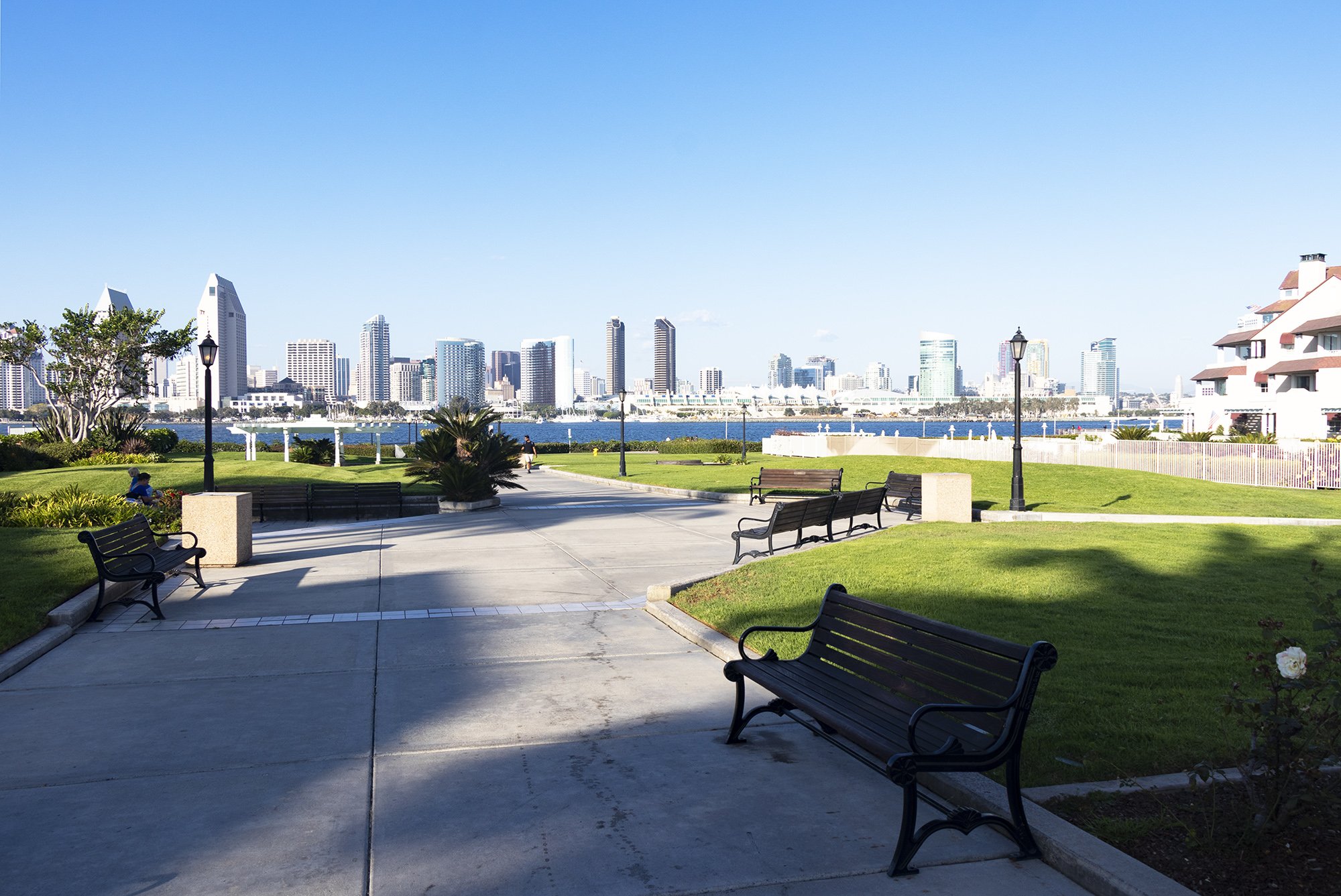 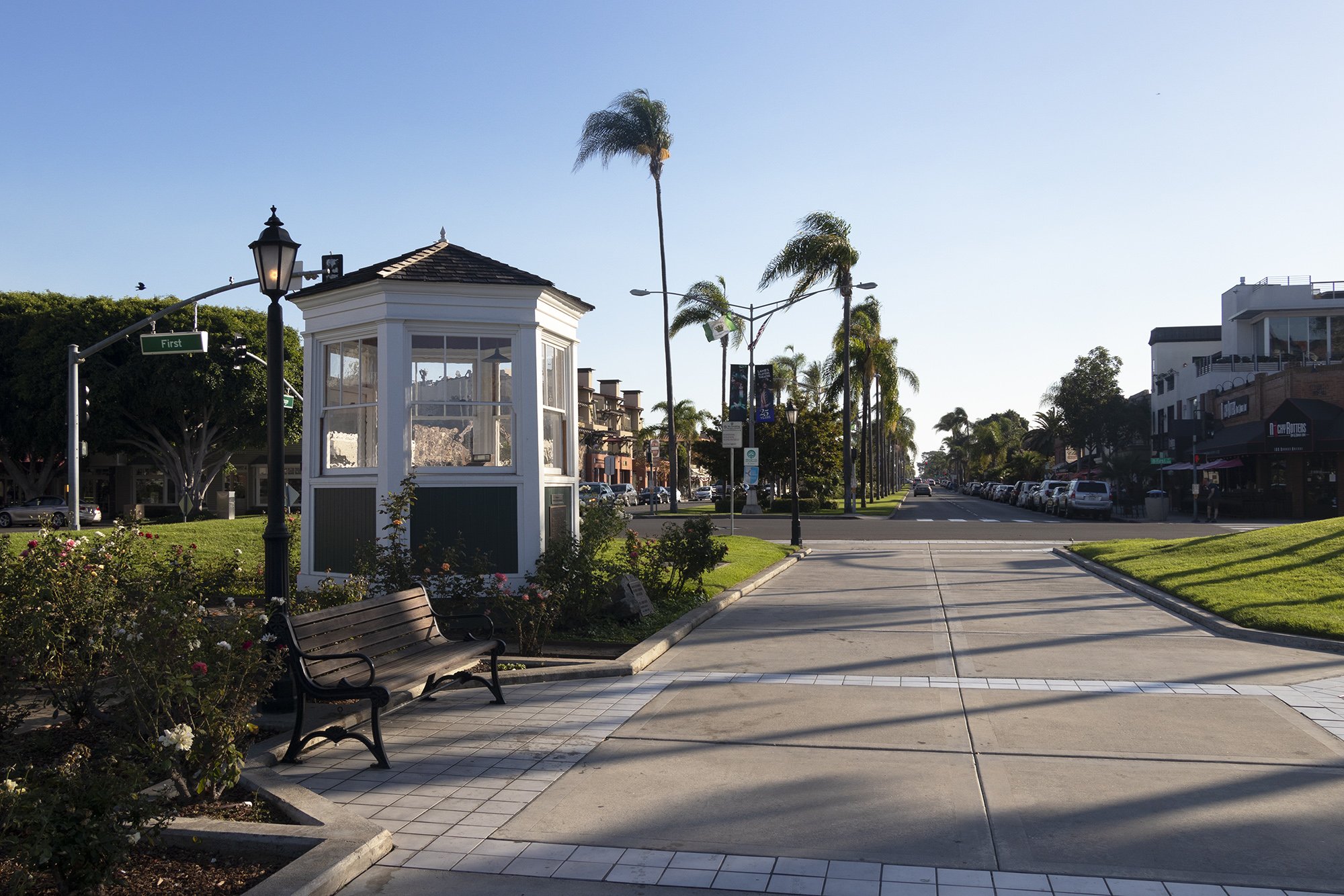 Named after J.D. Spreckels in 1927 (one of Coronado’s founders), Spreckels Park is located in the centre of the island, right by Orange Avenue. The 8 acre green park is great for relaxing in the heart of busy Coronado, and is also popular for its art exhibitions, the Coronado Flower Show and summer concerts every Sunday!

7. How to get to Coronado Island from San Diego?

There are two main ways of crossing the San Diego Bay and reaching Coronado Island: by car and by ferry. And if none of these tickle your fancy, there’s always a water taxi! 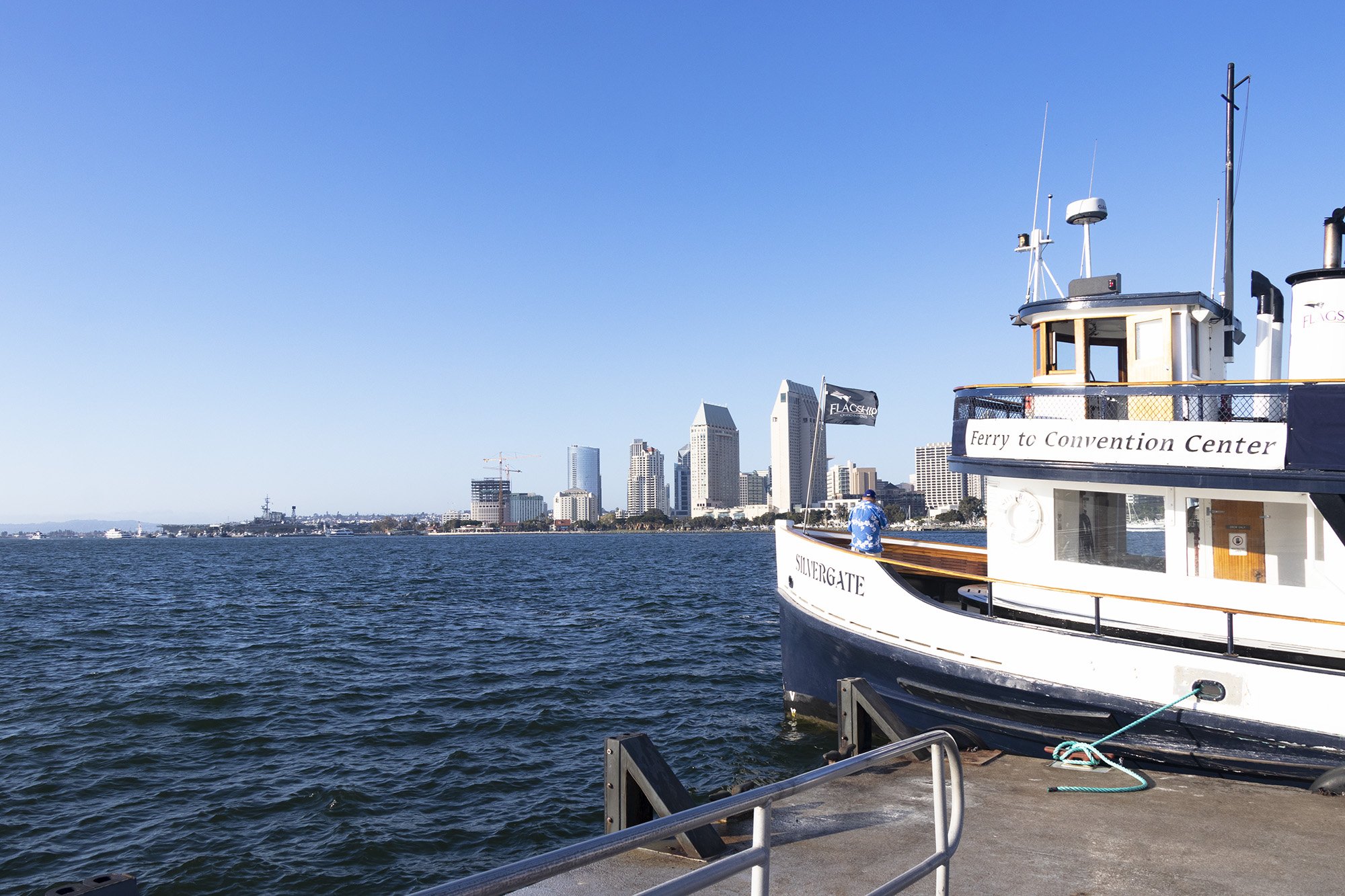 Are you planning a trip to Coronado? Or perhaps you’ve been before? I’d love to know! If you loved our guide to Coronado Island, please leave us a comment, pin some photos and show us some love on social media using the buttons below.

Do you like exploring the US? Then check out some of our other travel and food guides: