Spending Christmas in New York: Festive things to do in NYC

Christmas in New York is a magical time. From November, the Big Apple transforms into a magical winter postcard, and Christmas decorations are scattered all over the city. From the lavish window displays in Fifth Avenue, to the buzzing Christmas Markets in Manhattan and stunning NYC Christmas trees, there’s no doubt: no other place does Christmas like New York. 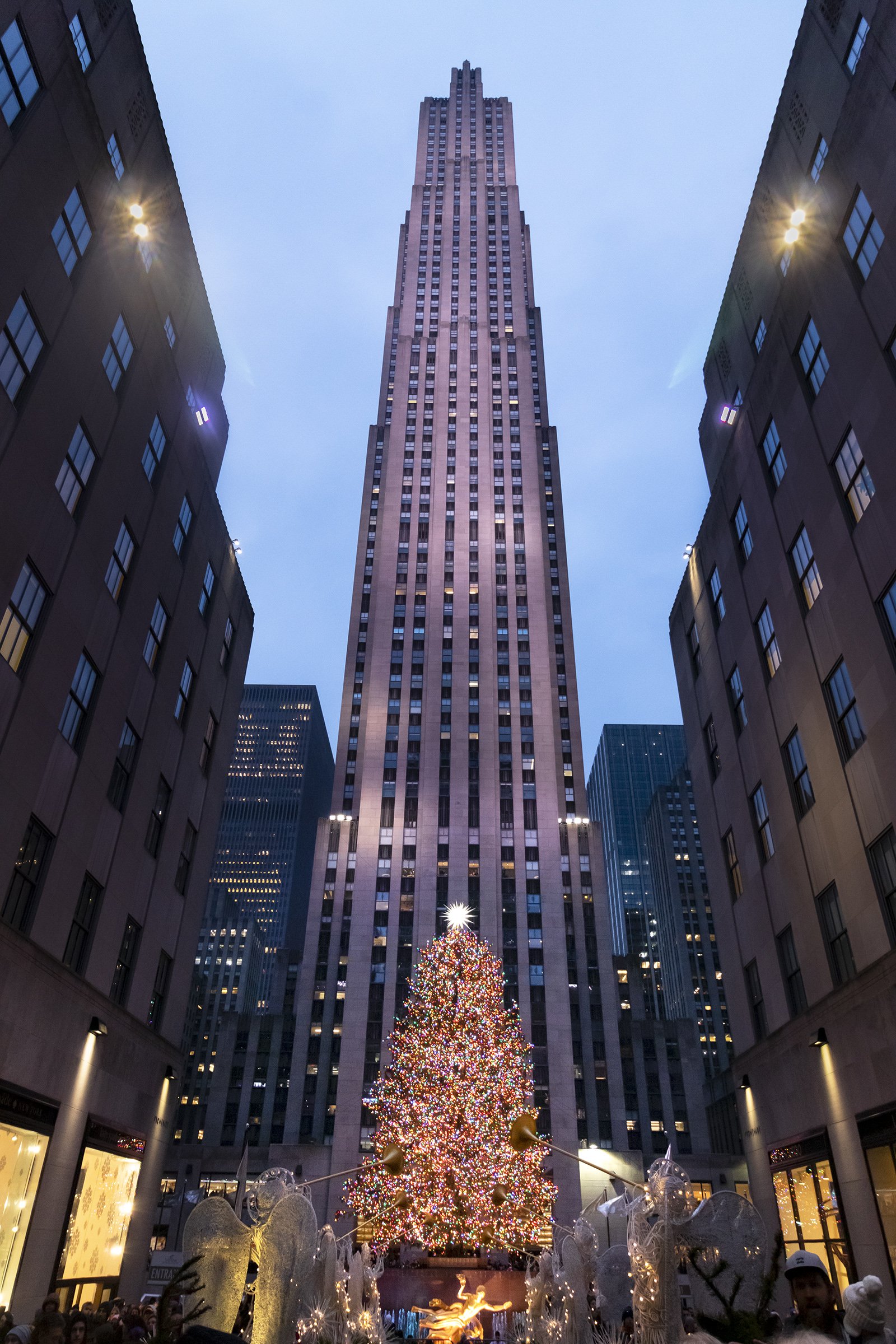 Visiting some NYC Christmas markets is one of the best things to do at Christmas in New York. Usually open from November until Christmas Day (with some remaining until early January), they’re the best place to do your Christmas shopping and get into the festive spirit.

Filled with pop-up eateries and kiosks selling Christmas decorations and local goods, they’re also great for those looking for an original New York ornament or souvenir. 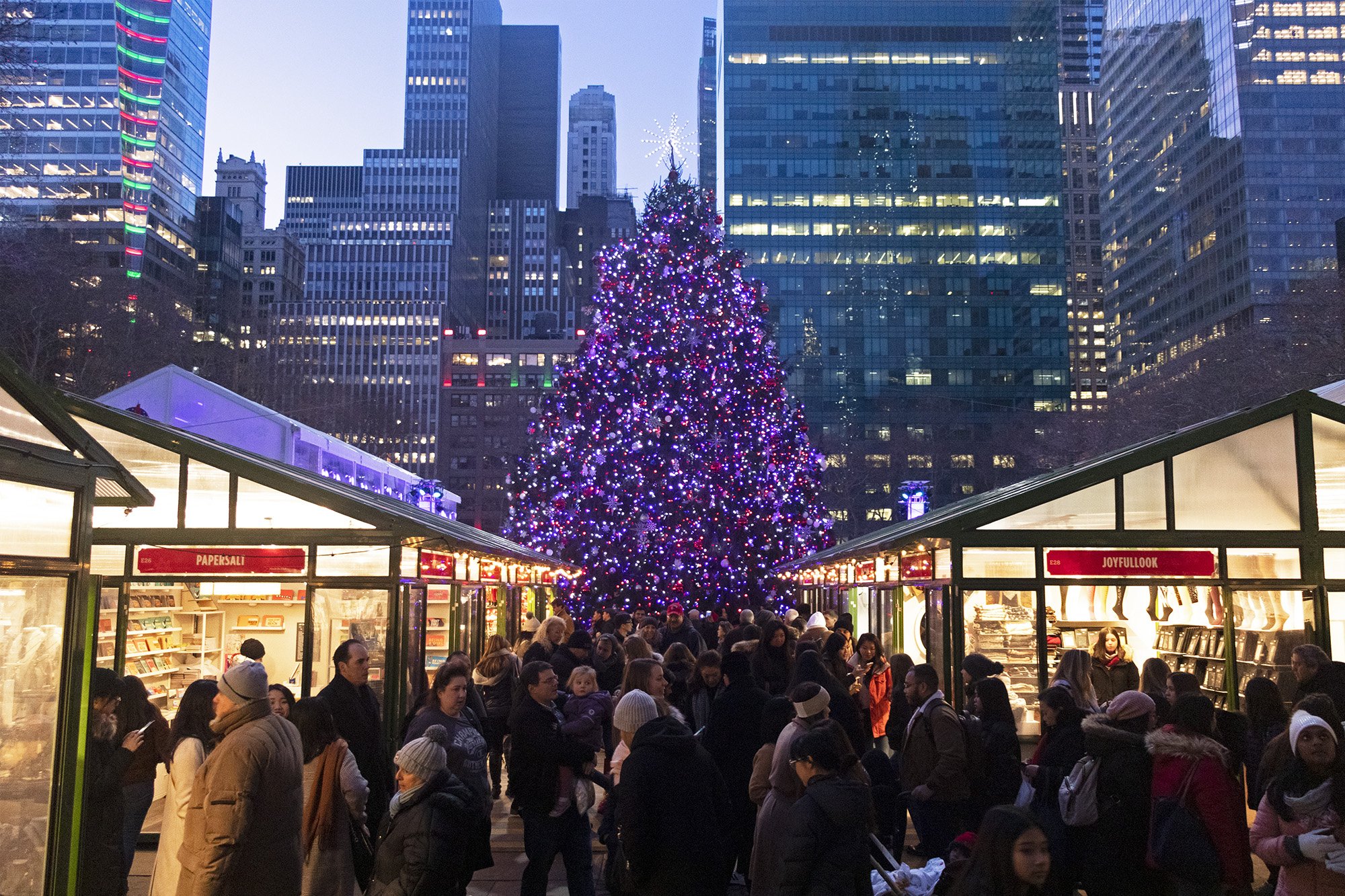 Some of the best New York Christmas markets are:

In the midst of the Christmas madness and cold temperatures, what better way to warm up than a glass of mulled wine followed by an ice-skating session? 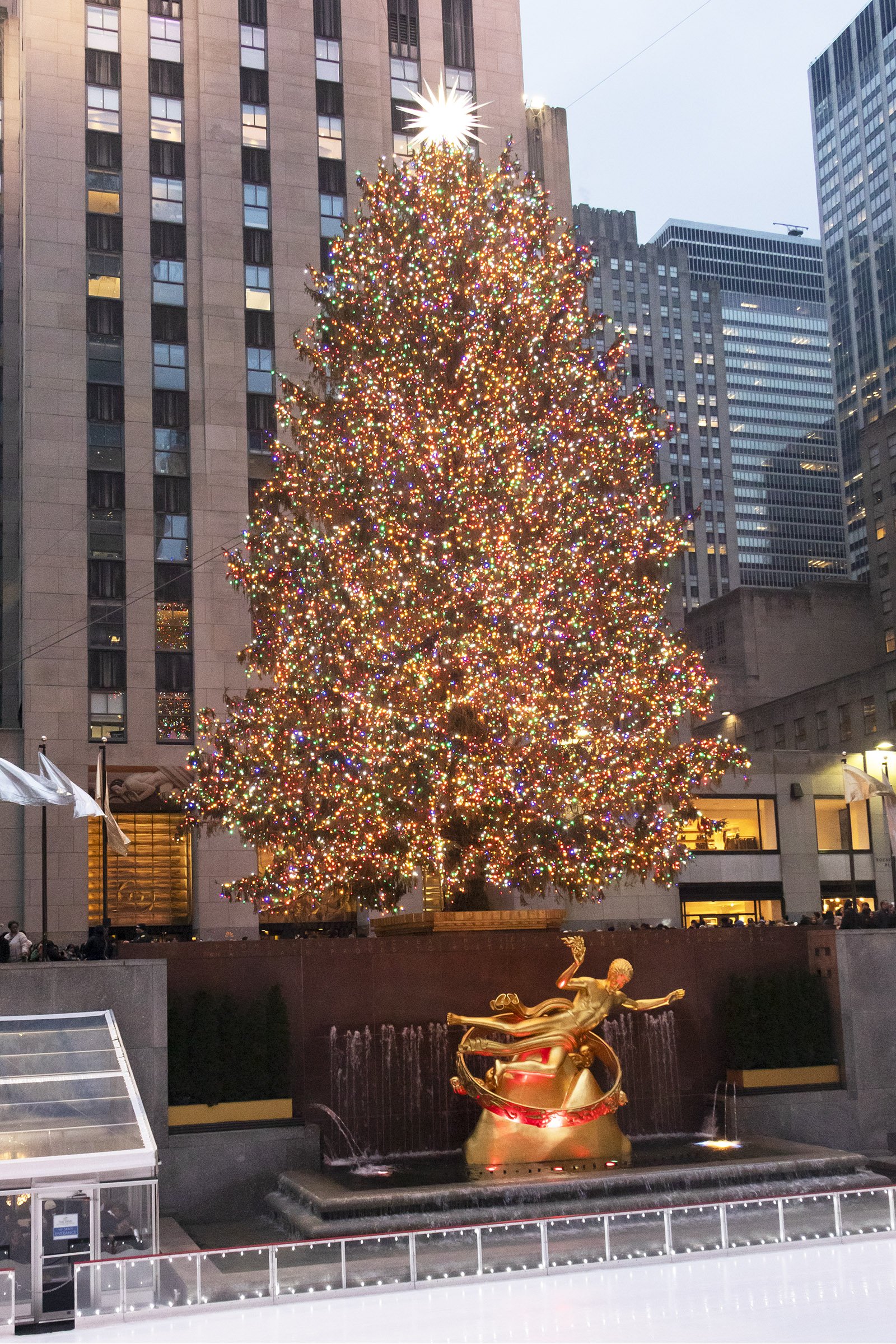 The Rockefeller Tree Lighting has become a national event that’s even broadcast live. The tree is lit by the Mayor of NYC and celebrity guests on the Wednesday after Thanksgiving each year, and the public is also encouraged to attend. Bear in mind this is probably one of the busiest parts of New York and a major event, so you’ll need to be there at least a few hours in advance!

Ice-skating under the Manhattan skyline is one of the top New York Christmas attractions. The Rockefeller Center ice-skating rink is the most famous rink in New York, but Central Park’s Wollman and Bryant Park ice-skating rinks are equally as emblematic. Tickets can cost up to $50 depending on the rink, and they also provide skate rental, sharpening and shoe and bag check. However, if you bring your own skates and a small bag, you’ll be able to skate for free at Bryant Park Winter Village ice rink!

Remember to bundle up! The experience is outdoors and the rinks are open rain or shine, so a good coat, gloves and a hat are a must.

You can expect dazzling and elaborate Christmas displays with everything from life-size Santas and reindeers to Nutcrackers and Christmas songs on loudspeakers. The over-the-top decorations are either professionally done or hung by the actual homeowners and can cost up to $20,000!

How to get to Dyker Heights?

The best way to get to Dyker Heights is by taking the subway. You can choose between the R, N and D trains. We recommend taking the D train to 79th Street/New Utretch Avenue, or the R train to 86th Street Station. You will then need to walk around 15-20min to get to the houses.

What to see the Dyker Heights Christmas lights?

The best time to see the Dyker Heights lights are from 5pm to 10pm, as you’ll be able to see the decorations in their full potential when it’s dark. Just remember these are people’s homes, so they’ll turn the lights off around 9pm-10pm (and sometimes later, depending on their bedtime).

5. Check out the Christmas window displays and the Saks Fifth Avenue light show

For a festive shopping experience, check out the Christmas window displays in New York’s most famous department stores. Start with the Saks Fifth Avenue light show, which features a dazzling holiday window display and a Christmas projection on its façade each year. The 1o-storey light show repeats every 7-8 min and the place is always packed with people waiting for the next one. You can even tick off 2 major things to do at Christmas in New York by seeing the Rockefeller Centre tree, then turning around to enjoy the Saks Fifth Avenue light show! 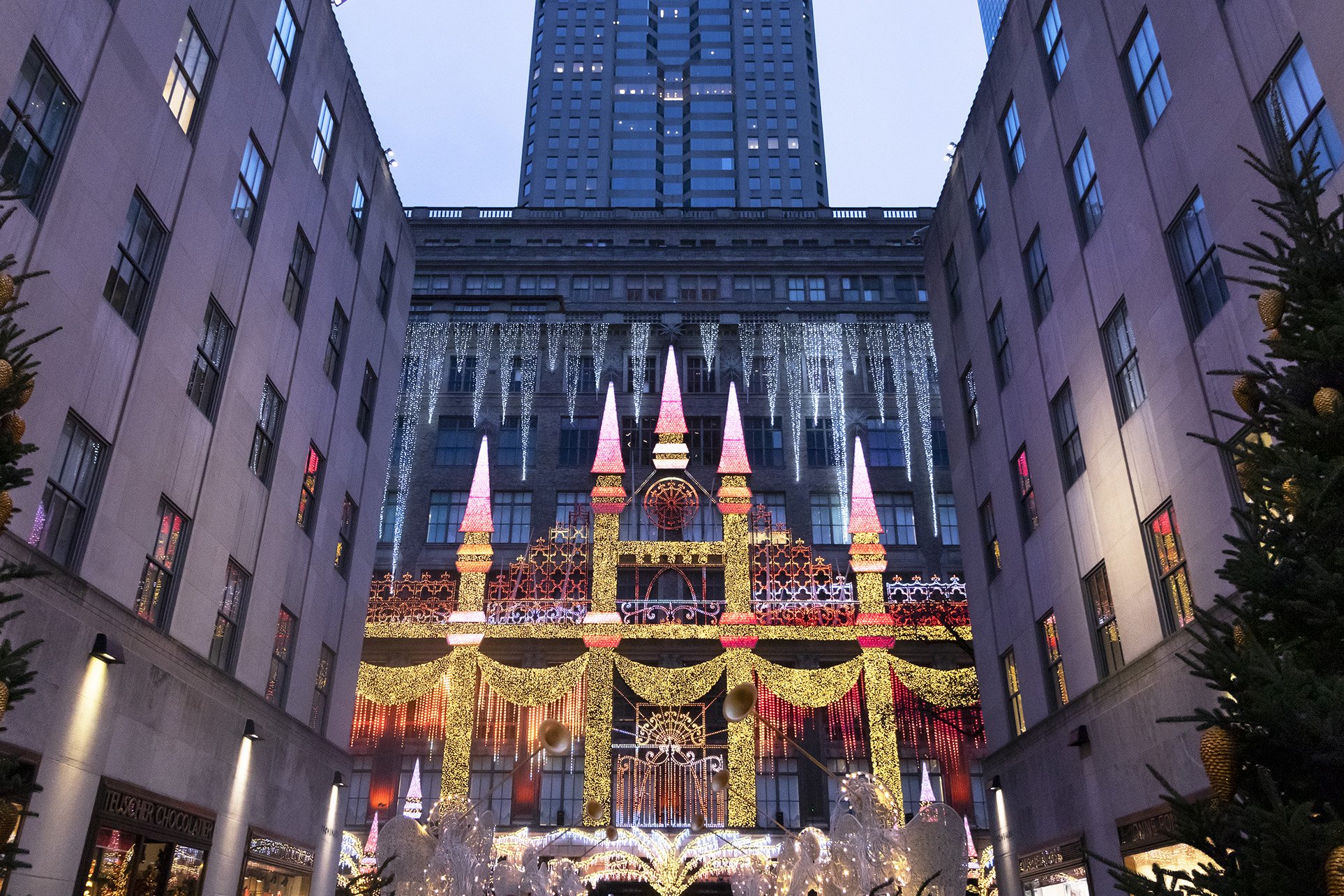 Musical lovers, don’t miss out on this quintessential New York Christmas experience! The Christmas Spectacular that takes place in the legendary Radio City Music Hall is an annual tradition that dates back to 1933. From mid-November to the beginning of January, the renowned Rockettes take you on a 90 min Christmas story told through perfectly timed high-kicking and dancing. It’s one of the best Christmas shows in NYC! 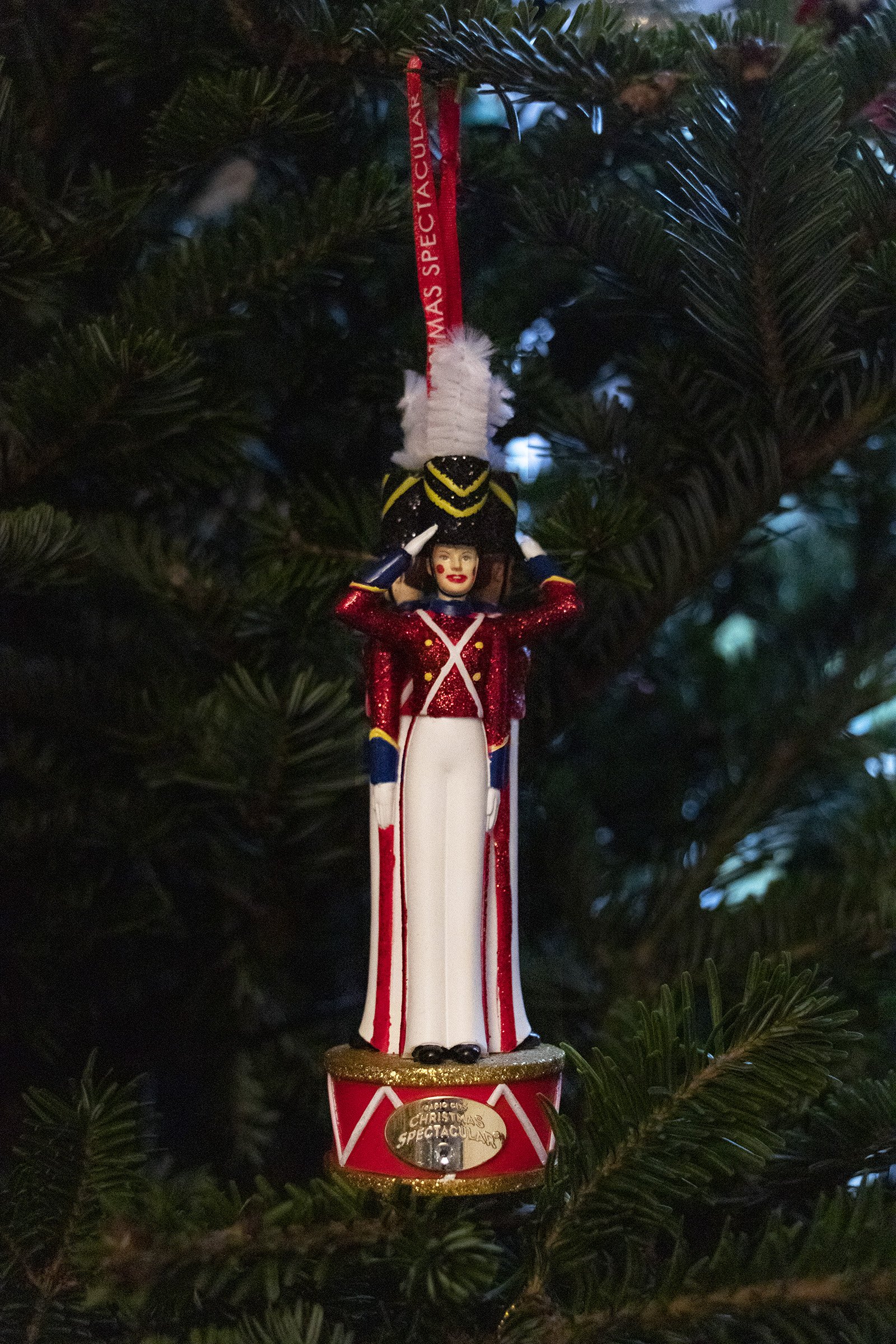 New Year’s Eve in New York is one of the most iconic celebrations and worth including in every bucket list. Why? Well, because you get to say Goodbye to Christmas and welcome the New Year with fireworks, confetti and the sound of “New York, New York” by Frank Sinatra!

The famous Time Square Ball goes up at 6pm and starts dropping at 23:59 from the One Times Square building – an event for which thousands of people gather from the early hours of the day. If you’re not up to waiting for long hours in the cold weather, squeezed between the crowd and wearing adult nappies (yes, this is a thing), we’ve got you covered. The ball looks much more spectacular (and closer) on TV! It can also be seen along Broadway (43rd St – 50th St) and Seventh Ave.

8. Other things to do at Christmas in New York

Do you love Christmas time as much as we do? Then check:

Spending Christmas in London: Festive things to do in London