Top 10 best US national parks you need to visit

There are a total of 62 national parks in the USA, each spectacular in their own way. In fact, the US is home to some of the best national parks in the world, and there’s a reason for that. The impressive wildlife and landscapes are unlike anywhere else on Earth. You can find deep canyons, sky-piercing sequoias, snow-capped peaks and vast deserts – all in one national park! Truly, there’s no better place to discover the unique natural wonders of the US.

Most of them are concentrated in California, Alaska, Utah and Colorado, and are a mandatory stop for outdoor lovers and anyone going on a road trip adventure. If you have limited time or are simply wondering which is the best US national park to visit first, fear not! We’ve shortened them down to the top 10 national parks in the USA you must visit at least once in your life, in no particular order.

Very close to Coachella Valley and Palm Springs, where the Colorado and Mojave deserts meet, you can find a raw paradise of intense peace and adventure. With nearly 800,000 acres of Wild West inspired landscapes, it’s easy to see why Joshua Tree attracts more than 2 million visitors every year. 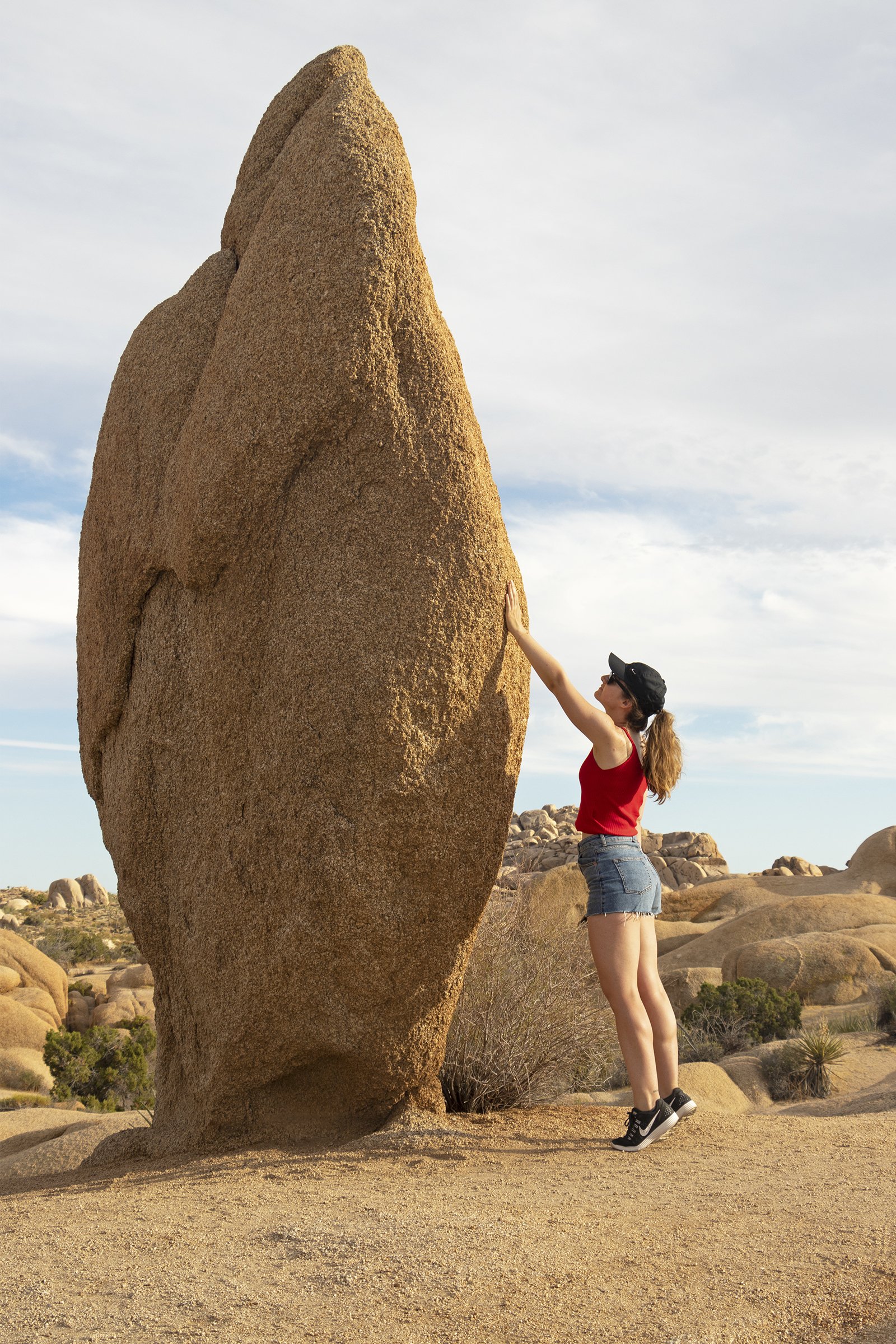 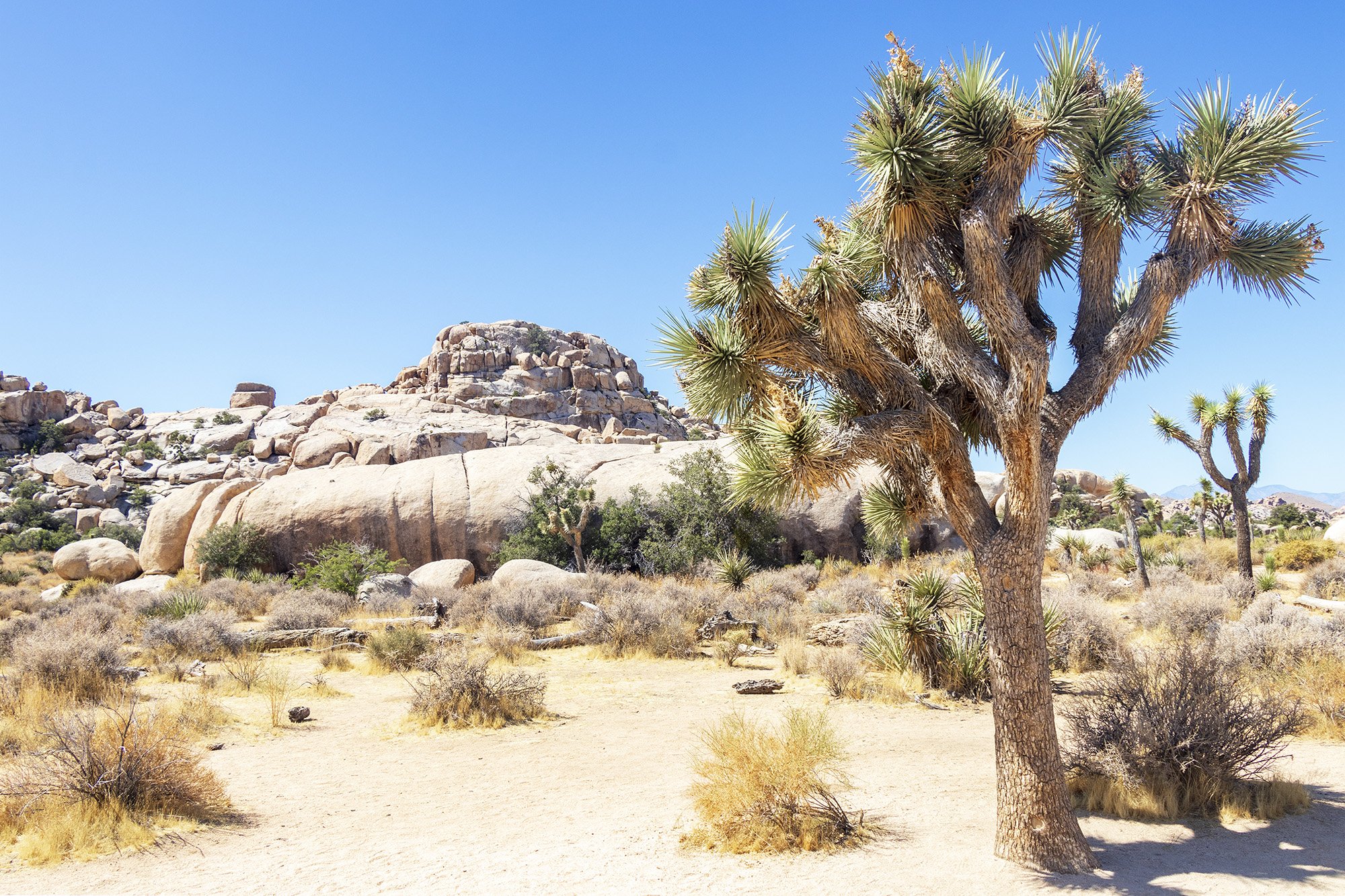 Named after the spiny species of Yucca plant that cover the park, Joshua Tree is also known for its dry valleys, oasis and sand dunes. It’s especially attractive to radical climbers and boulderers for its more than 8,000 climbing routes and extraordinarily rugged rocks. Wildlife has also adapted to this extremely dry environment. During the day, you can spot a wide variety of lizards, ground squirrels and birds. At night, keep your eyes peeled for snakes, kangaroo rats, jackrabbits and desert bighorn sheep. Joshua Tree is also one of the best American national parks for astrophotography!

What to see in Joshua Tree

Located just over 160 miles from San Francisco, Yosemite is one of the most popular national parks in the US. With just under 750,000 acres of glacially carved landscape and over 800 miles of hiking trails, it’s difficult not to fall in love with Yosemite. 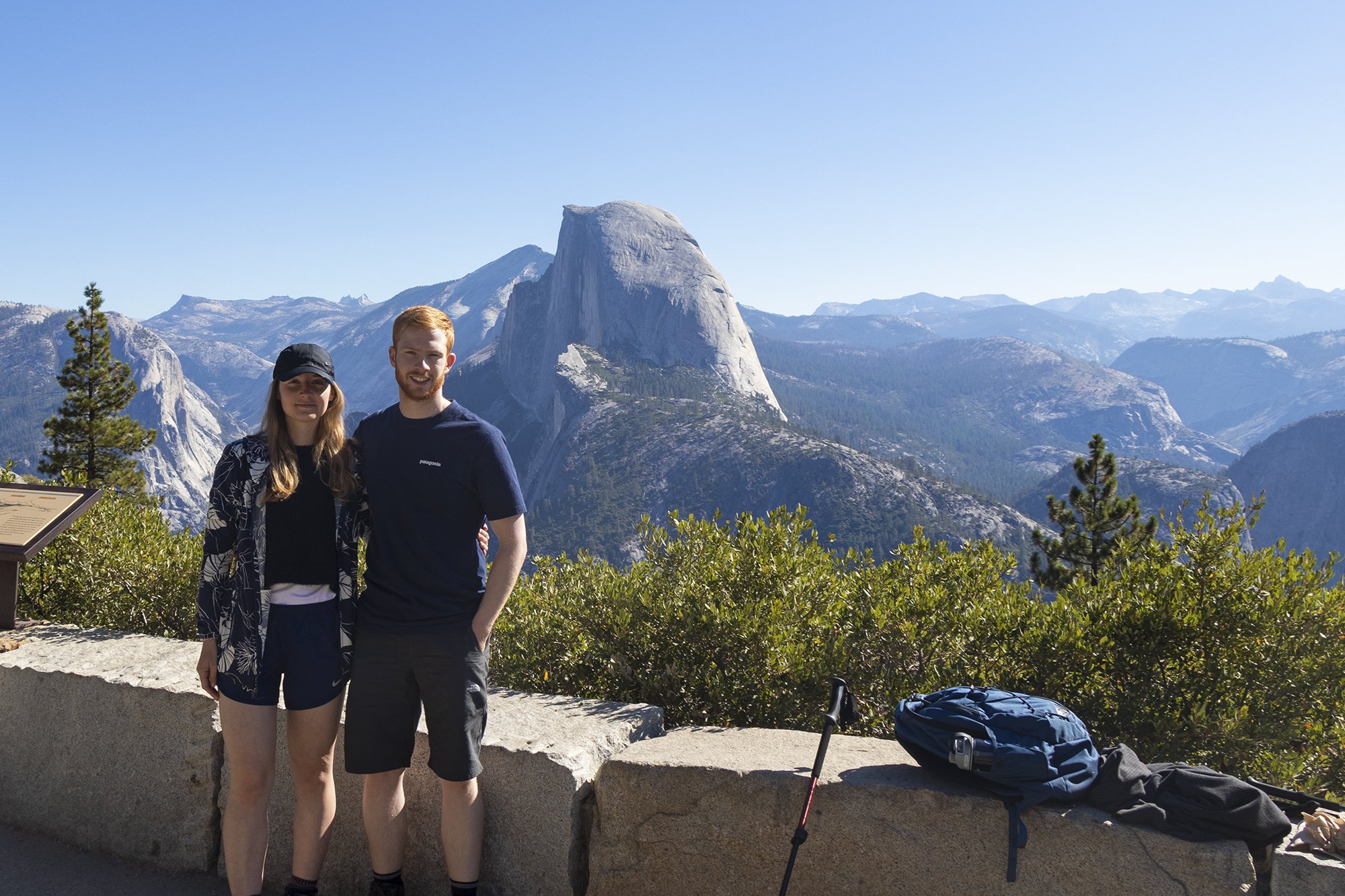 Yosemite is one of the most beautiful national parks in the US, known for its impressive granite cliffs, giant sequoia forests and waterfalls. And the rich wildlife is just the cherry on top. This is black bear territory, so get ready for occasional bear spotting! There are also coyotes, mountain lions, deer and squirrels. You can also spot a number of rock climbers ascending the sheer granite walls of El Capitan and Half Dome every day. Check out the movies The Dawn Wall and Free Solo to follow professional climbers Tommy Caldwell and Alex Honnold in their attempts to climb parts of El Capitan (with and without ropes!).

What to see in Yosemite

Sequoia National Park is the second-oldest national park in the US. It shares a combined size of 850,000 acres with Kings Canyon National Park, at the south of Sierra Nevada Mountain Range in California. The dramatic landscape of both parks includes deep canyons, caves, rugged snowcapped peaks and ancient giant sequoias. These are the wold’s largest living trees and only grow naturally on the west slope of the Sierra Nevada. 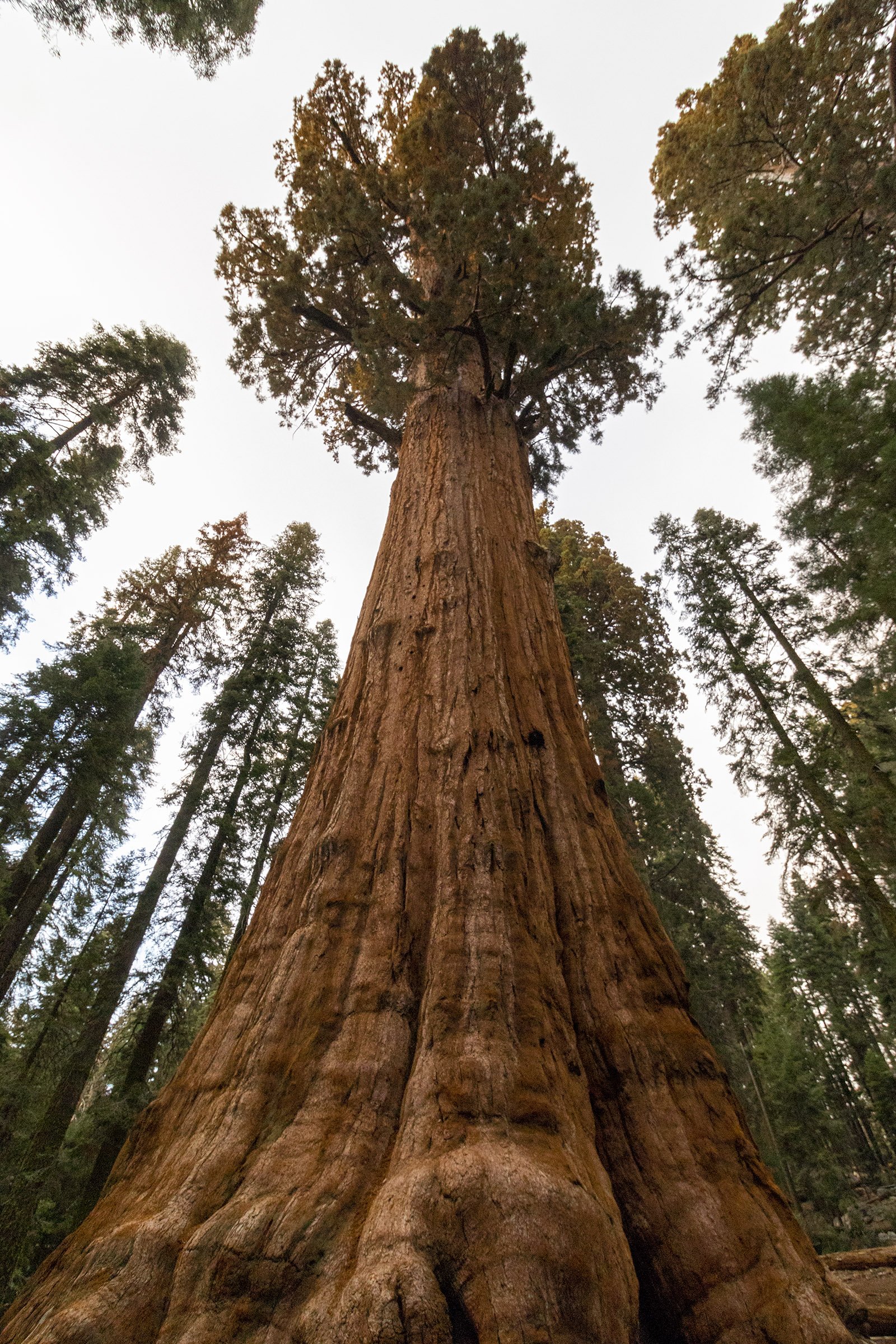 Apart from being home to the largest tree in the world (the General Sherman Tree), the parks also contain the deepest canyon in the US – the South Fork Canyon of the Kings River. With numerous viewpoints, there are also plenty of fishing, horse riding and campfire programs throughout the year.

What to see in Sequoia National Park

What to see in Kings Canyon

A 2.5h drive from Las Vegas will take you to Zion, Utah’s oldest national park. More than 240 million years of erosion and weathering have sculpted Zion’s ever-evolving landscape. In fact, the series of colourful cliffs, deserts and deep canyons (with the Zion Canyon the most spectacular of all) are still carved today! The Virgin River and smaller streams are constantly cutting into the rock layers, having built up over 10,000 feet of sediment so far. 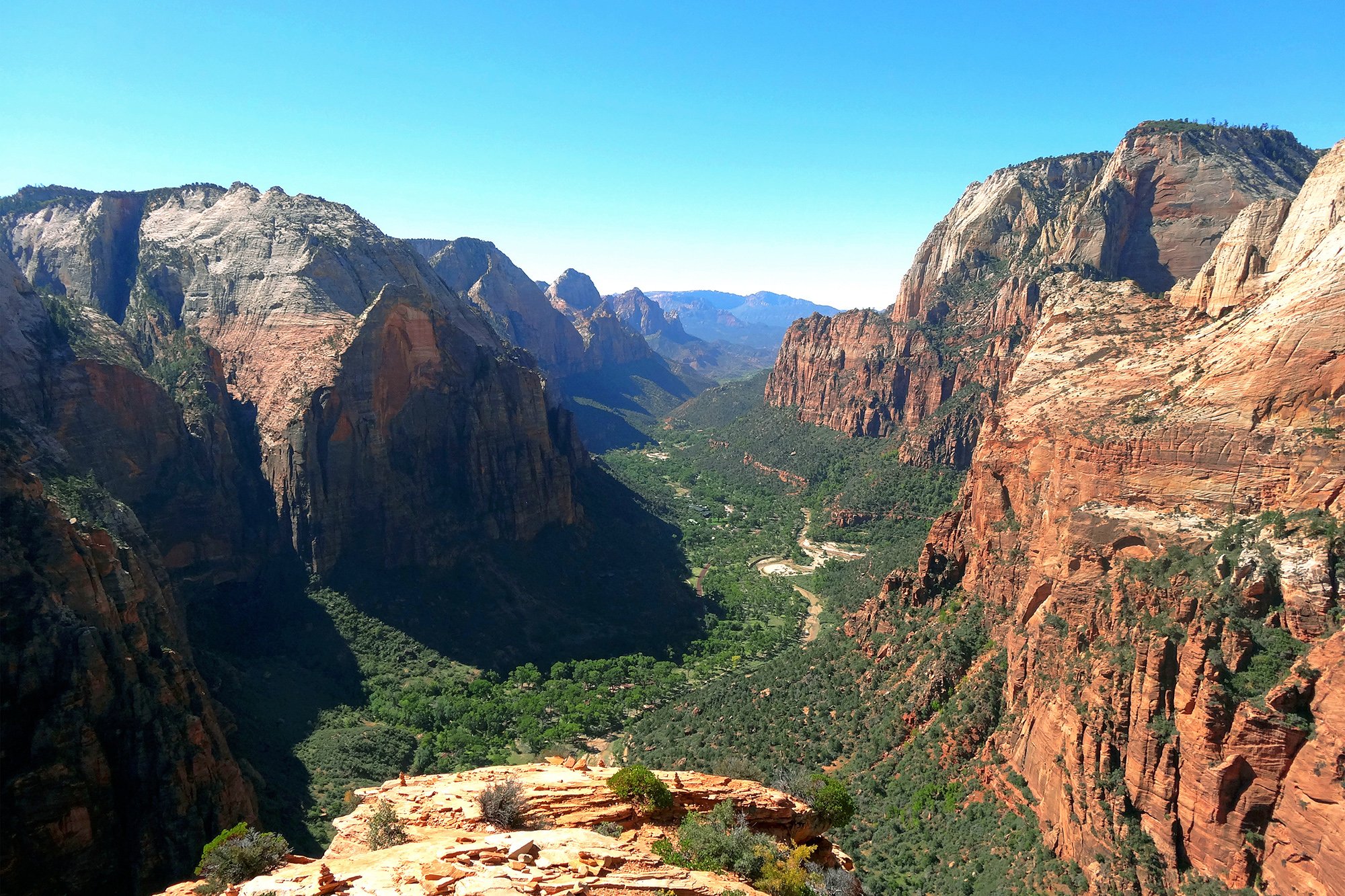 The rich diversity of fauna here includes the critically endangered Mexican Spotted Owl and Southwestern Willow Flycatcher, as well as Mojave Desert tortoises and California Condor. And as of flora? You can expect to see everything from Zion’s famous “Hanging Gardens” (ferns, mosses and wildflowers) to desert shrubs. You can even hike in (yes, in!) the Virgin River through a gorge with walls a thousand feet tall known as The Narrows! All of this really makes Zion one of the most beautiful national parks in the US and the world.

What to see in Zion

Arches is one of the Big 5 Utah national parks. It’s best known for its red rock landscape, with over 2,000 natural sandstone arches (the largest concentration in the world!) and hundreds of pinnacles, balanced rocks and carved windows. This unique landscape makes Arches one of the prettiest national parks in the US.

The 75,000 acres of dramatic rock scenery is also home to native desert plants and animals, most of them nocturnal. Stay awake for a little longer and and you’ll be able to spot bobcats, bats, skunks, owls and mountain lions. Also, Arches is one of the best national parks in the US for stargazing, so if you’re a fan, don’t miss the opportunity to observe the sky. At dark, stars and galaxies became clear in the dark sky thanks to the strict artificial light restrictions of the area. There’s a reason Arches is one of 70 International Dark Sky parks in the world!

What to see in Arches National Park

A trip to Arizona (or a bucket list) isn’t complete without a visit to the Grand Canyon. The sequence of eroded rock layers date back 1.8 billion years ago at the very bottom! Carved by the Colorado River, the Grand Canyon National Park is a total of 277 river miles long (446km), 18 miles wide (29km) and a mile deep (1.6km). You can explore the semi-arid park by hiking the many trails, riding your bike and even rafting on the Colorado River. 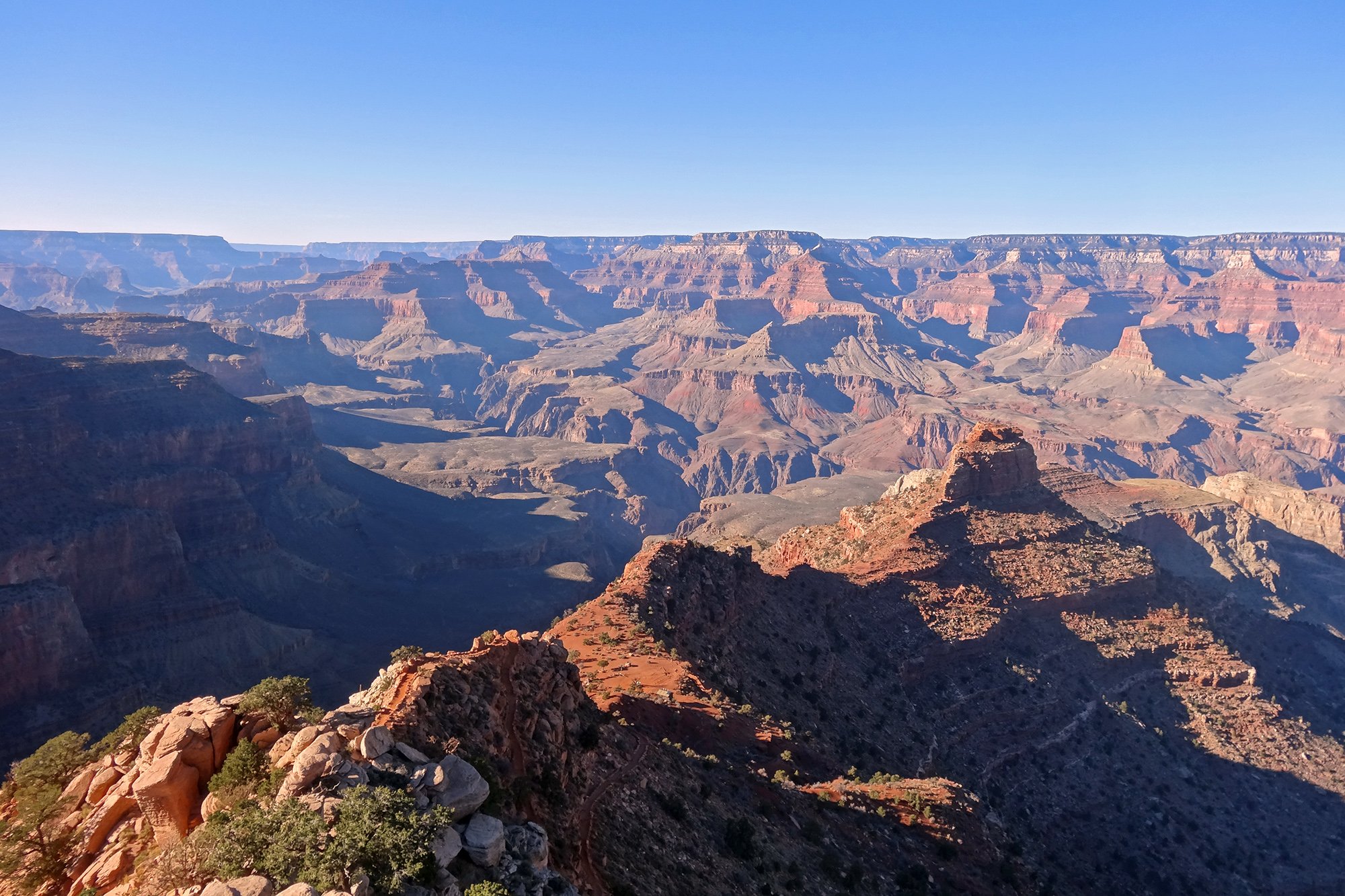 The different elevations of the rugged landscape, alongside the climate, have created a remarkable range of plant and animal communities. You can see Grand Canyon rattlesnakes, desert bighorn sheep and Joshua Trees in the low desert near the Colorado River. Meanwhile, the mountain forests near the North Rim thrive with rainfall and are therefore home to mule deer, wild turkeys, and Aspen Trees.

What to see in the Grand Canyon

You can find the world’s largest collection of hoodoos (irregularly eroded rock columns) in Utah’s Bryce Canyon. Despite what its name might suggest, Bryce Canyon is actually a series of natural amphitheaters carved into the edge of the Paunsaugunt Plateau. The most famous of these is Bryce Amphitheater, filled with fantastic viewpoints along its rim, all connected with hiking trails. 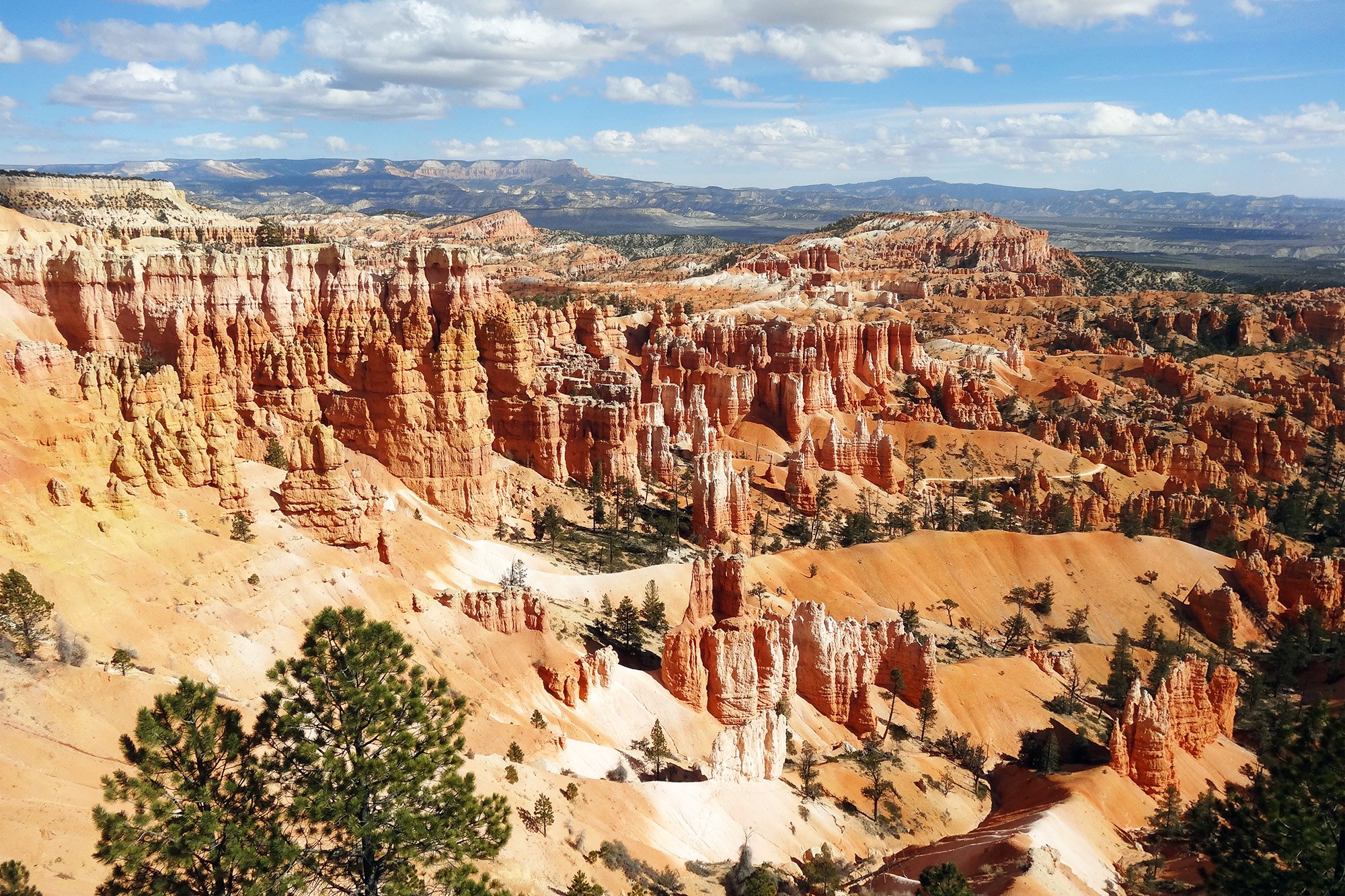 Drive along the only main road of the park for 18 miles of scenic views. Or join many of the horseback rides, astronomy programs or full moon hikes available. As a Dark Sky Sanctuary, Bryce Canyon offers over 100 astronomy programs per year, and even an Annual Astronomy Festival with activities both during the day and night.

A bonus is it’s only about 80 miles from Zion to Bryce Canyon, so you can visit two of the best US national parks quite easily!

What to see in Bryce Canyon

With 2.2 million acres and nearly a thousand miles of trails, Yellowstone has something for everyone. Yellowstone is not only the first US national park, but also the first national park in the world! The majority of Yellowstone is tucked into the northwest corner of Wyoming, with small sections spilling into Montana and Idaho. 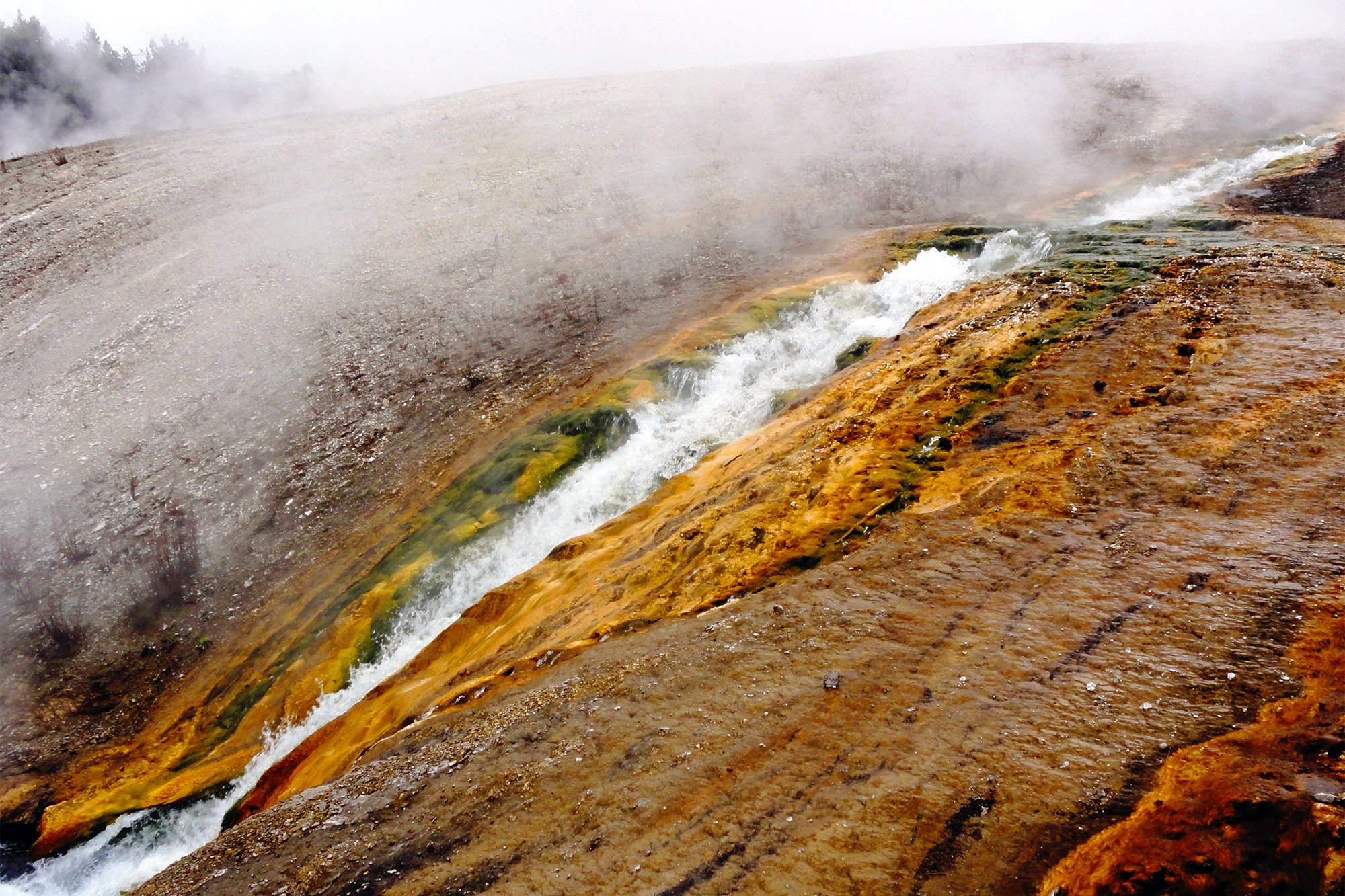 More than 4 million people visit Yellowstone every year, and it’s not difficult to see why. Yellowstone contains over 10,000 hot springs, bubbling mud pots, geysers and fumaroles. If this wasn’t enough, the Greater Yellowstone Ecosystem is one of the largest temperate-zones in the world, with a wildlife and natural diversity like no other. You can see just a fraction of it in this amazing photo captured by Sam’s grandpa David. Yellowstone is also home to the world’s largest great bison herds, as well as grizzly bears, Gray Wolfs and geological wonders like the Grand Canyon of the Yellowstone River. Yellowstone National Park also contains Yellowstone Caldera, a supervolcano!

What to see in Yellowstone

Everglades was the first national park ever created to protect a threatened ecosystem. South Florida contains 1.5 million acres of wetland – the largest subtropical wilderness of the US. Since 1934, the park has made significant efforts to protect the quickly vanishing Everglades, addressing issues such as pollution and environmental threats, and returning water to its natural distribution. Thanks to this, Everglades National Park has earned three world designations: UNESCO World Heritage Site, International Biosphere Reserve and Wetland of International Importance! 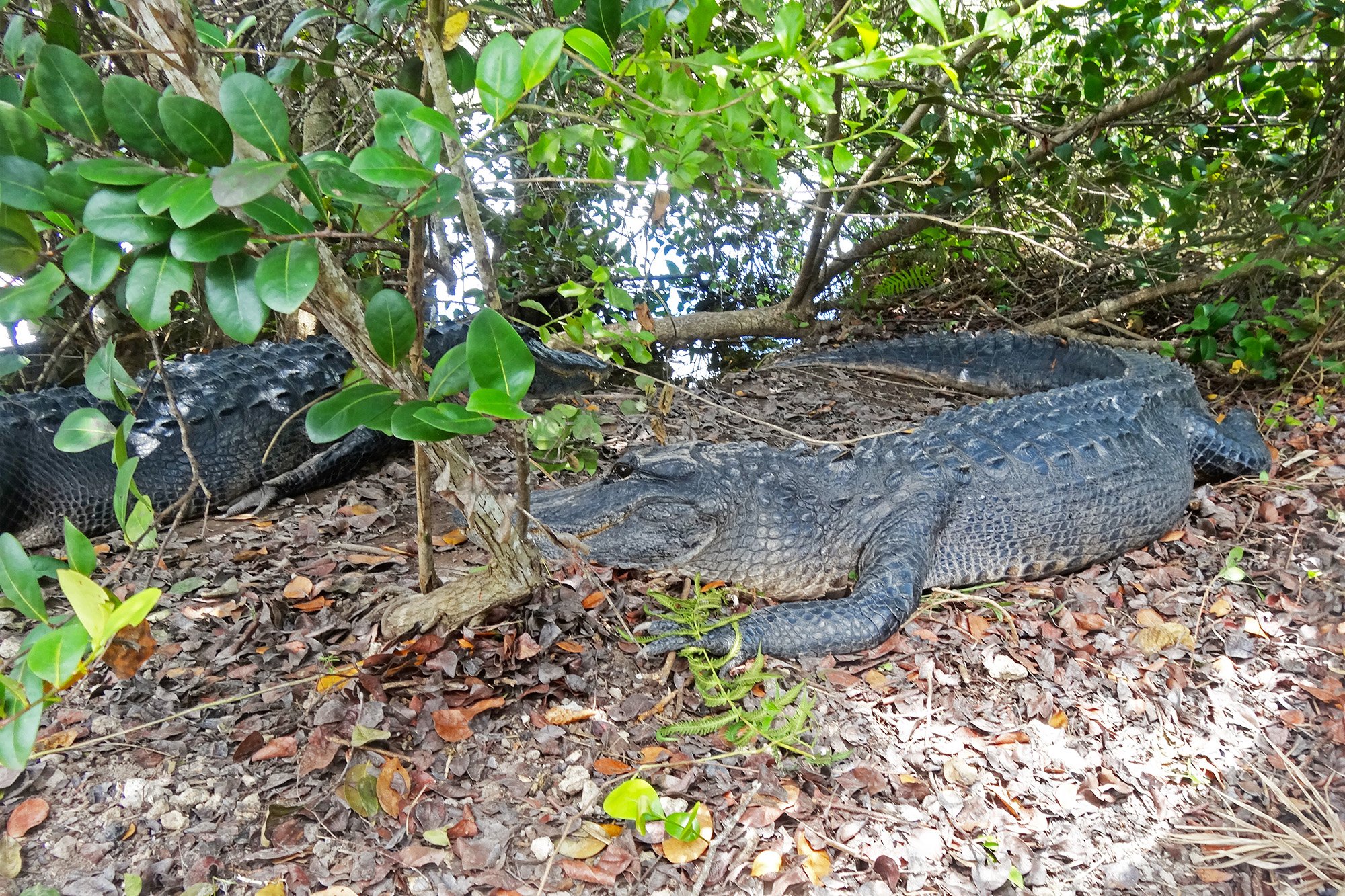 The vast wetlands go all the way down to Flamingo, the southernmost point in mainland Florida. With a combination of tropical Caribbean and temperate North American flora, the park is also home to a number of endangered and protected species, such as West Indian manatees, American crocodiles and Florida panthers, as well as over 200,000 alligators!

As most of the park is only accessible by water, you can explore it by canoe, boat or kayak. There are also a number of board walks and short trails along the park.

What to see in Everglades

With over 300,000 acres of colourful landscape, Canyonlands is the largest national park in Utah. Similarly to the Grand Canyon, it contains vast vistas of mesas, canyons and buttes carved by the Colorado and Green Rivers, as well as their tributaries. 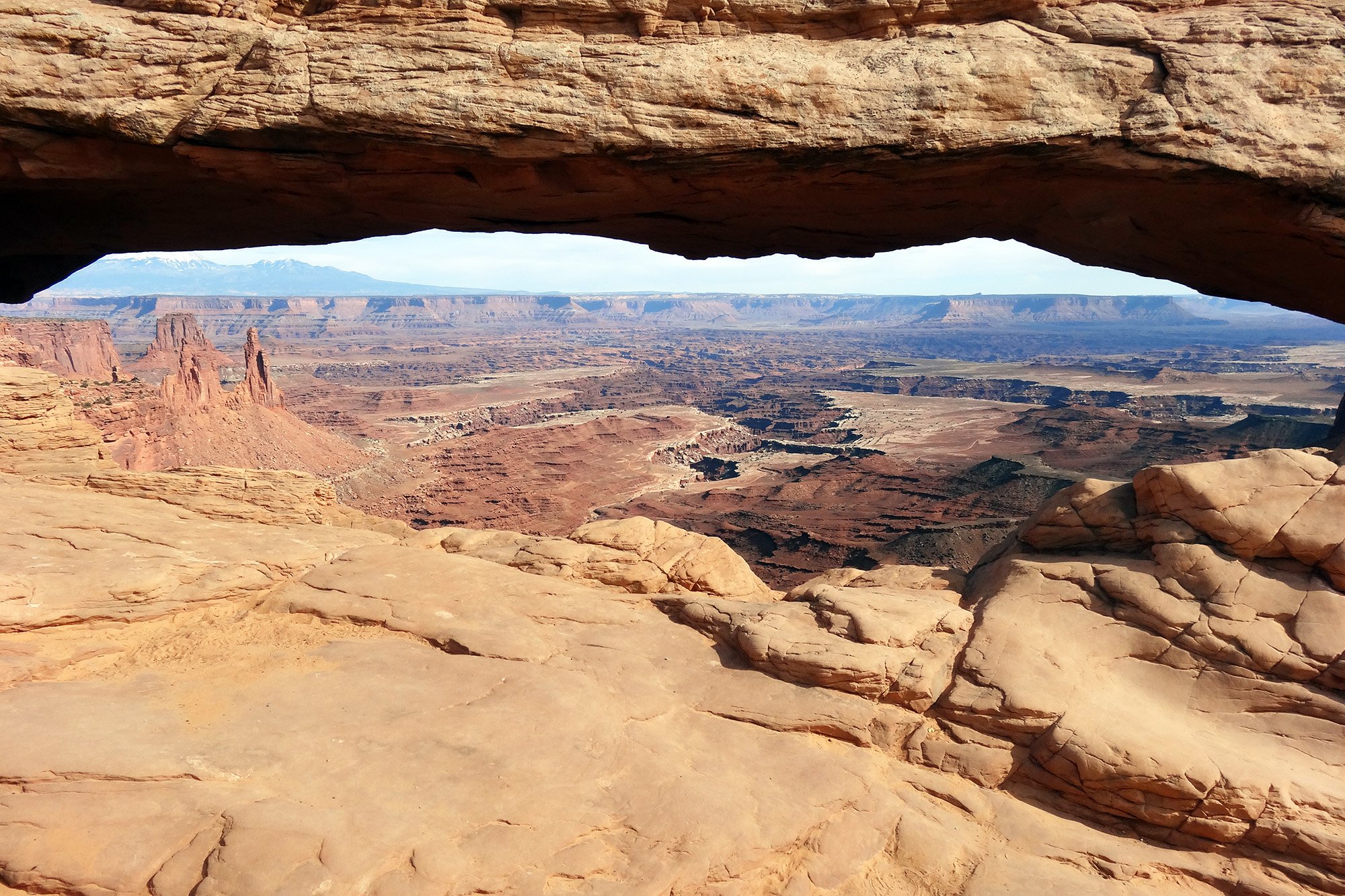 Canyonlands National Park is also home to one of the best preserved and largest collections of Barrier Canyon Style rock art in the world and even dinosaur footprints! Photographers also flock to Mesa Arch for a shot at sunset.

You can explore each of the four districts: Island in the Sky, the Needles, the Maze and the Rivers, which separate each of them. Although all districts may appear close, they’re actually quite not directly connected. With only a few places to cross the Rivers, it can take up to six hours to reach them. We would recommend an individual trip to explore each district with Island in the Sky being your priority. You may also recognise Canyonlands from the movie “127 Hours”. If you do go exploring though, please make sure you tell someone in advance!

What to see in Canyonlands

Did you find this post helpful? Which US national parks have you visited? I’d love to know! If you loved our guide to the best US national parks, please leave us a comment, pin some photos and show us some love on social media using the buttons below.

Staycation ideas: Where to go on holiday in the UK

“I like that boulder. That is a nice boulder”.

Letting this picture speak for itself - I really r