Nice has to be one of the main stops on every Cote d’Azur road trip. This glamorous city in the South of France is a regular hotspot celebrities for its Mediterranean atmosphere and delicious food. But there’s so much more to it. Nice’s old town is one of the most beautiful of the country, as are its spectacular cathedrals and charming neighbourhoods.

Don’t have a lot of time in Nice and don’t know where to start? Don’t worry, 24h in Nice is more than enough time to get the most of the coastal scenery and visit some locally recommended spots. And the best part is, you don’t even need a car! Here are the absolute must things to do in Nice in a day. 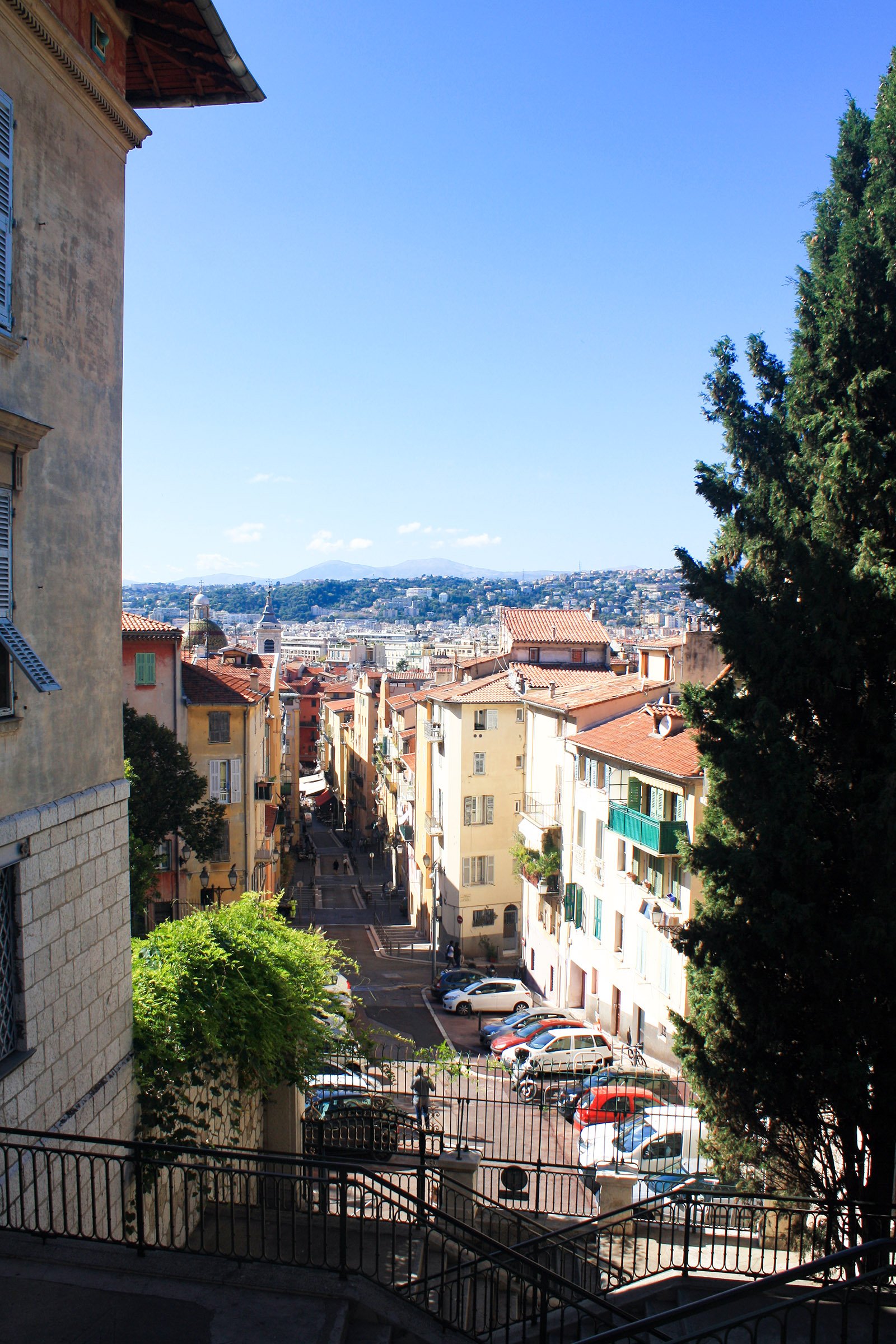 One of the best things to do in Nice is getting lost in the narrow cobbled streets of the Vieille Ville. The pastel coloured buildings, with red roofs, wooden shutters and clothes drying in balconies, will instantly transport you back to olden times. Along the charming corners of Nice Old Town, you can also find small churches, old cathedrals, markets and busy cafés. Check out the beautiful Place Rosetti, where the Nice Cathedral stands, as well as the Opéra de Nice and the Flower Market (Marché aux fleurs Cours Saleya). 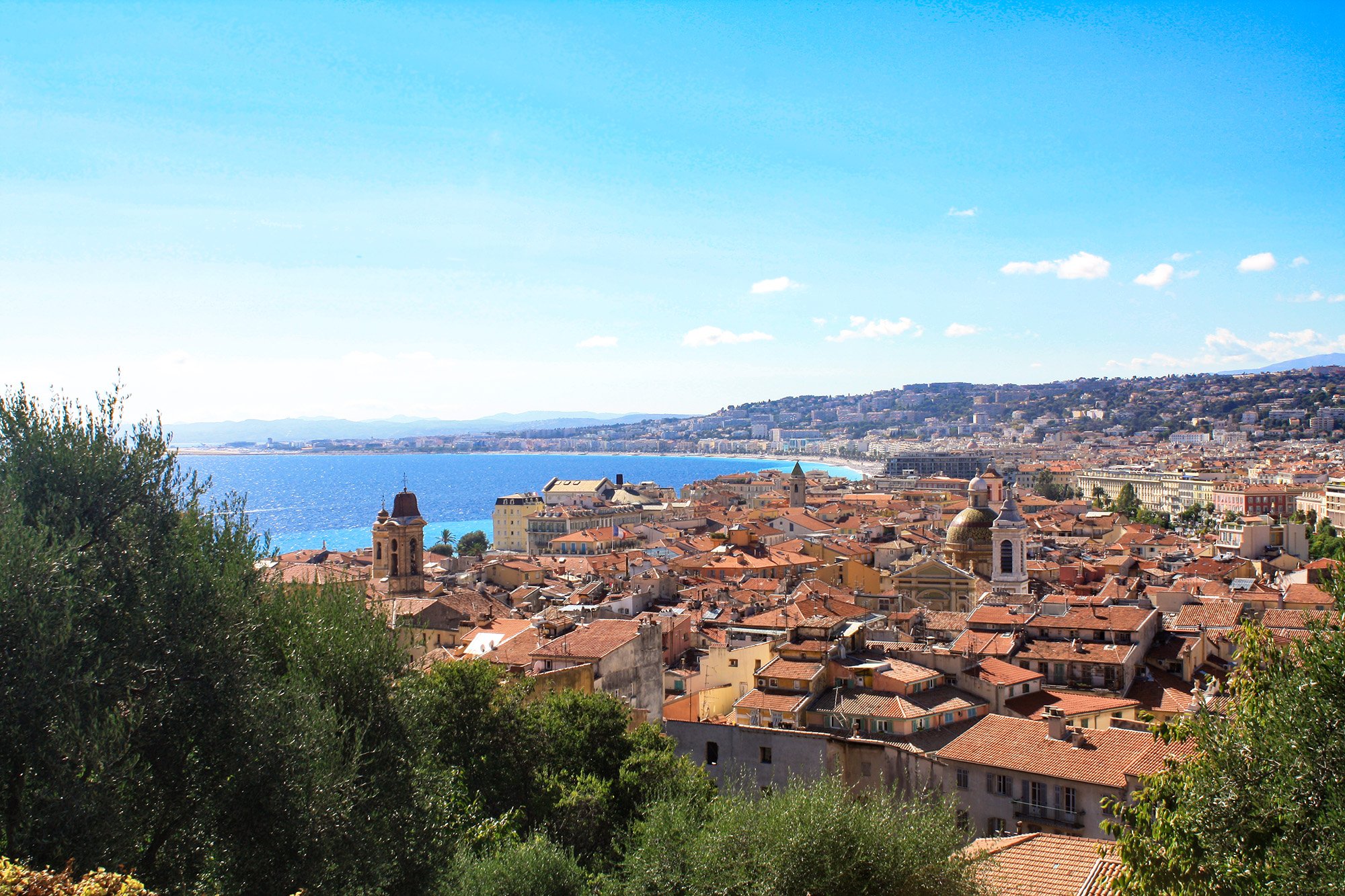 If you have a sweet tooth, you can’t leave without trying Azzurro (it serves best Italian ice cream in town!) and Maison Auer‘s chocolate (established in 1820). And, for those looking for something savoury, try the socca at Chez Pipo. We had this delicious chickpea pancake in Cannes too and we loved it!

This 7km long boulevard is perhaps the most well-known part of Nice, stretching all the way from Nice Airport to Nice Castle. Dating back to the 18th century, Promenade des Anglais was named after the English aristocrats of the area. They took advantage of the sunny weather to walk along the boulevard, and also provided an influx to the economy at the time.

The promenade is the best place to get uninterrupted views of the seafront and the Mediterranean Sea. It’s also home to some of the most beautiful belle époque buildings of Nice. A local landmark is the historic Hotel Negresco, where Elton John filmed “I’m still standing“! 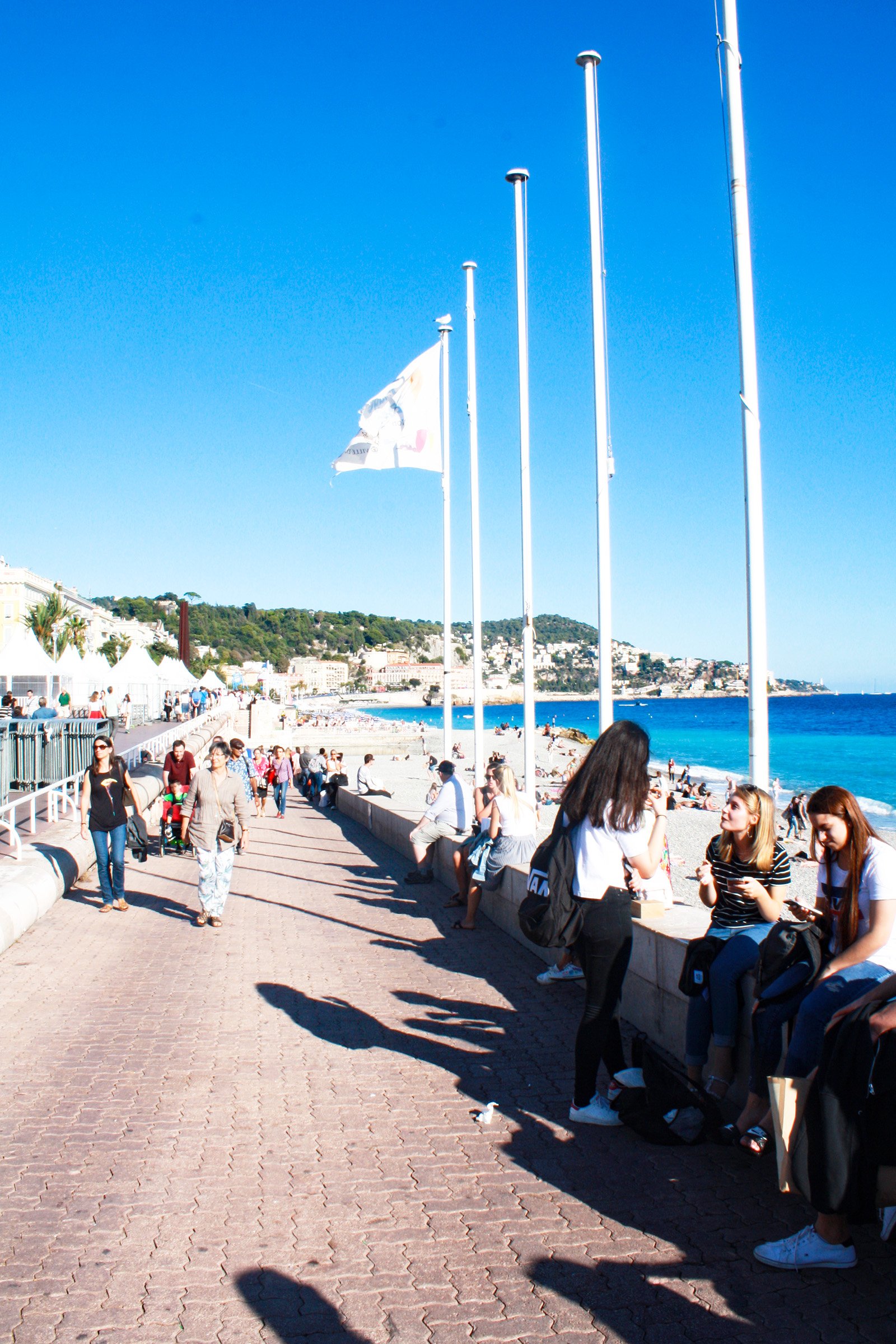 Nice is famous for its spectacular pebble beaches and clear blue water. They have to be near the top of your things to do in Nice. Most of them are private and run along the Promenade des Anglais (such as Castel Plage or Plage Beau Rivage). However,  there are also a few stunning public beaches in Nice with free access (Blue Beach, Ponchettes Public Beach). Perfect for waterskiing, parasailing or simply sunbathing, the private beaches also offer extras such as parasols and sun loungers. Keep in mind the French Riviera, and Nice in particular, is known for attracting jellyfish! Make sure there are no jellyfish signs before entering the water.

Information on jellyfish sightings can be found here. 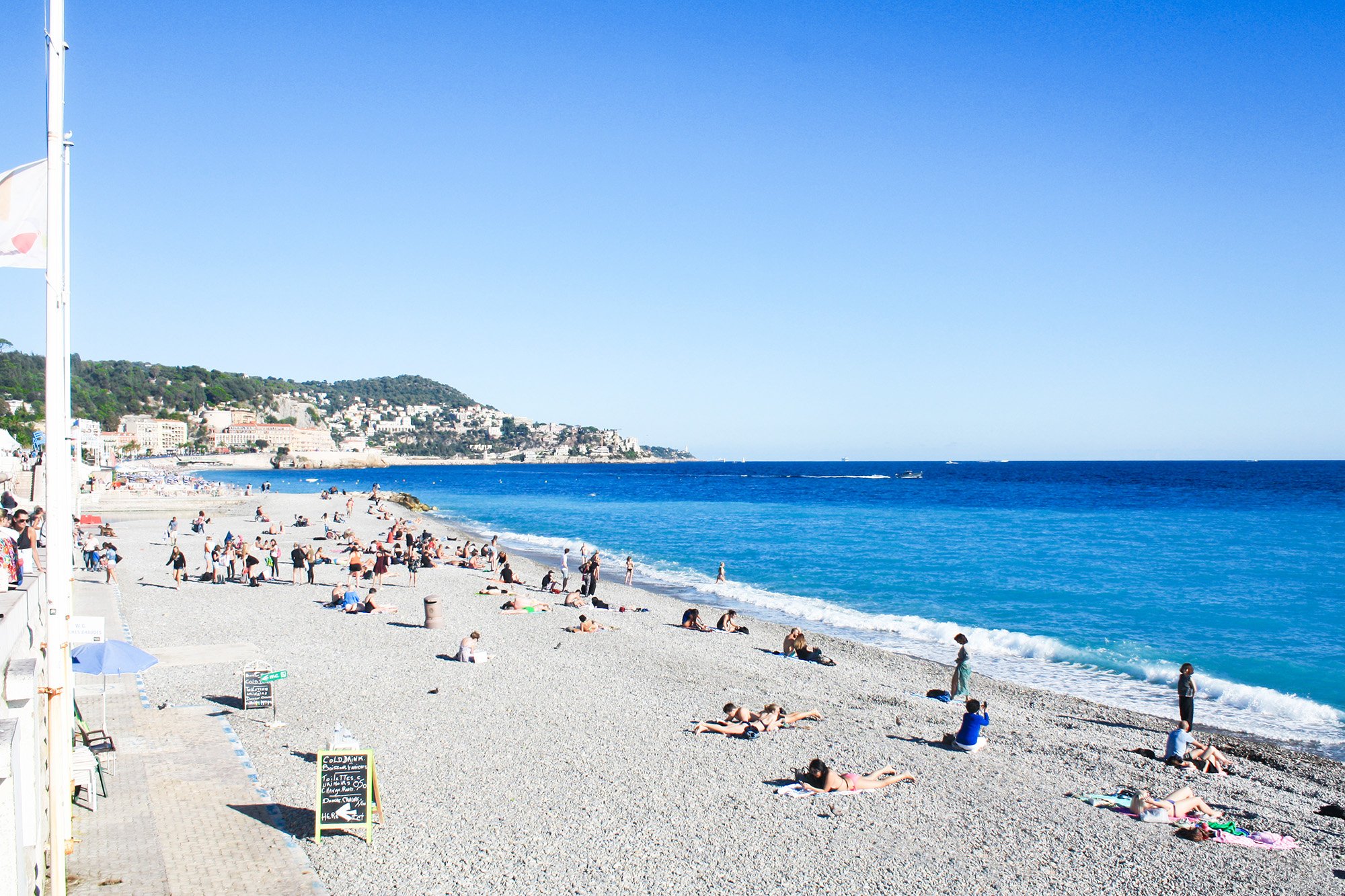 The Cathédrale Sainte-Réparate is the oldest cathedral in Nice. Located in the Vieille Ville, it was built in a Baroque style in 1699 in honour of Saint Reparata, the patron saint of Nice. Inside, you can find a total of 10 chapels dedicated to different saints and martyrs.

An original church sat on the site since the 11th century, but additional buildings were added throughout the years. Now, Cathédrale Sainte-Réparate is home to many of Saint Reparata’s artefacts. Legend says that, after being killed for her beliefs, her remains and relics arrived in Nice on a boat full of flowers and guided by angels! 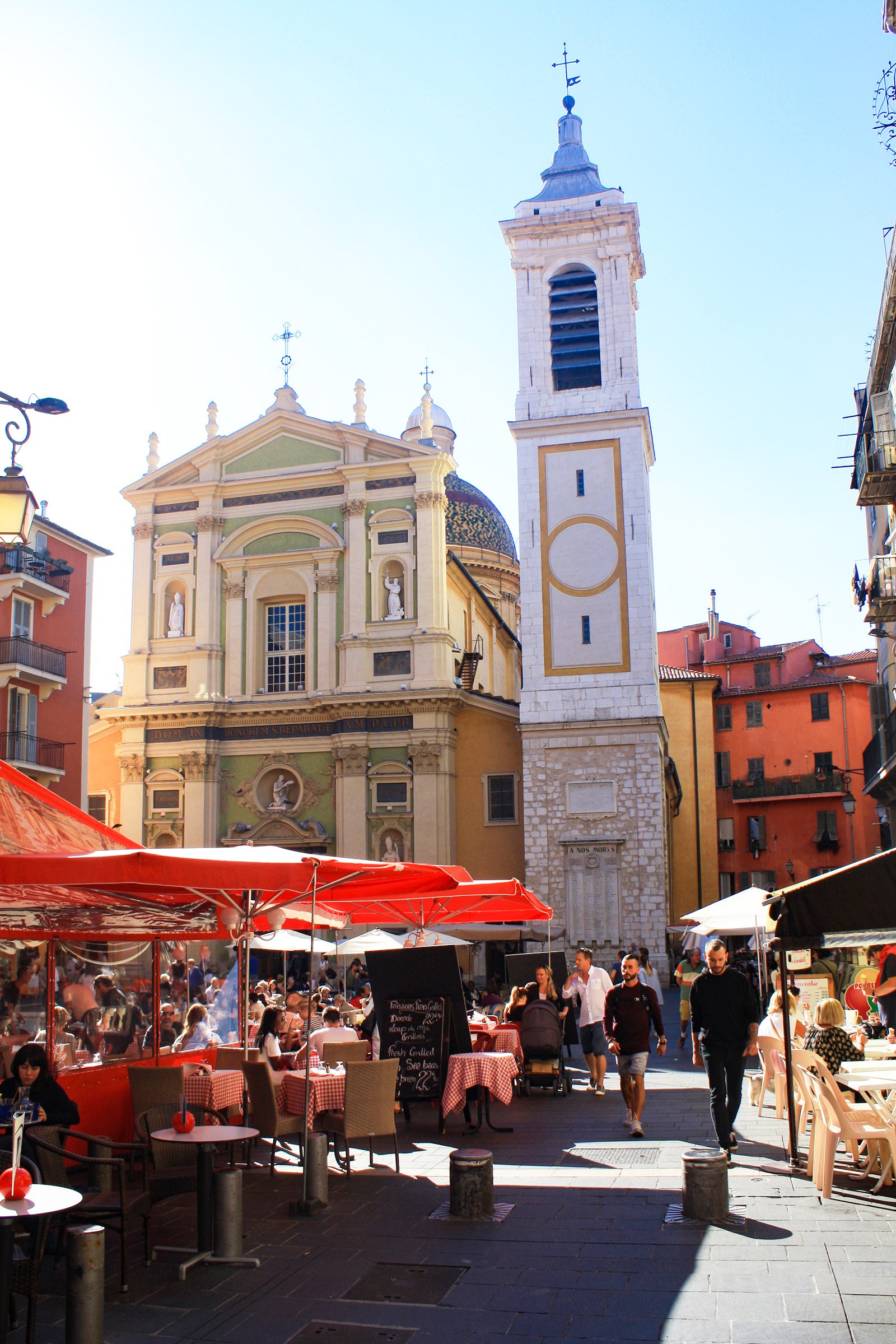 A citadel once stood on Castle Hill, mainly used for military purposes as part of Savoy. After being overtaken by French troops in 1705, it was destroyed by order of Louis XIV. Now, Castle Hill is used as a park and offers spectacular views overlooking the Vieille Ville, the Port and the Baie des Anges on either side. You can also visit the large man-made waterfall, the archeological digs, a large observation deck standing at 92m and the Tour Bellanda. The ancient tower was rebuilt in 1824, using its remaining medieval foundations as a base.

To get to the top of Castle Hill, you can either take the free art-deco lift built within the rock of the old castle well. Or walk the many stairs and get your heart rate up, like we did!

6. Some other things to do in Nice

Did you find this itinerary of things to do in Nice in a day helpful? Have you visited Nice or are you planning a trip along the French Riviera? I’d love to know! If you loved our guide to things to see in Nice in a day, please leave us a comment, pin some photos and show us some love on social media using the buttons below.

How to spend a weekend in Liverpool | TRAVEL GUIDE