Montmartre is one of the most beautiful parts of Paris, and arguably the best one to explore with so many things to do in Montmartre. Sitting on the highest hill in Paris, it was originally a separate village known for its many vineyards and windmills. In 1860, it was annexed to the French capital as part of the 18th arrondissement, and it quickly became the bohemian quarter of the city. There was no other place in Paris quite like Montmartre, and many cabaret performers and artists became associated with it (Picasso, Toulouse-Lautrec and Van Gogh, to name a few).

You can still feel the charming village atmosphere of Montmartre today. With old Parisian houses covered in ivy, cobbled streets, a stunning white domed Basilica and cafés left, right and centre, Montmartre is certainly a must-see location in Paris. Here are our favourite things to do in Montmartre. 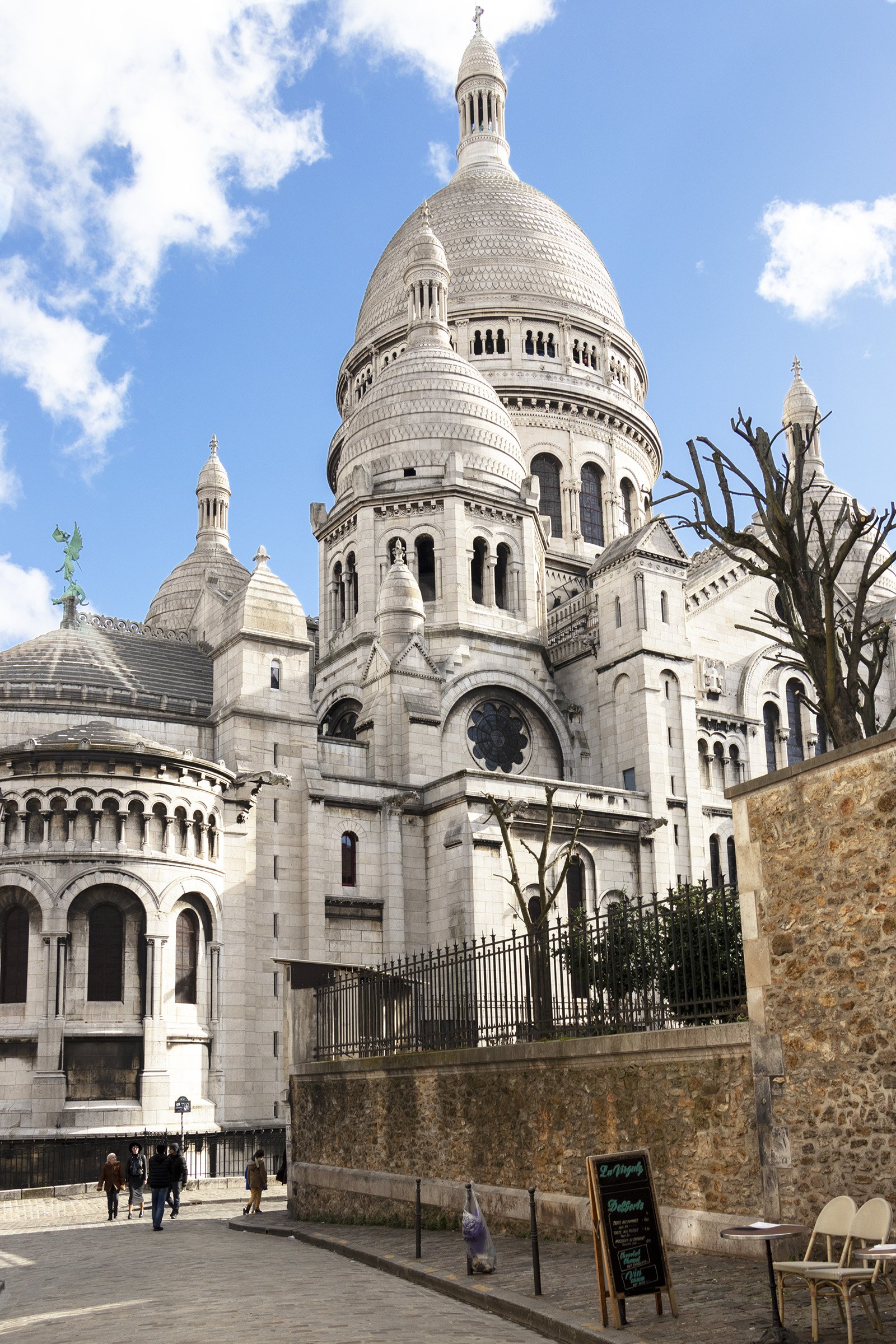 Built in 1914 as a memorial to the 58,000 French soldiers killed during the Franco-Perussian war. The pristine white church is a free interpretation of Romano-Byzantine architecture, featuring a distinctive egg-shaped dome. This is the second highest view-point in Paris after the Eiffel Tower. Just walk up its 300 steps and you’ll see some of the most breathtaking panoramic views of Paris from Sacré-Coeur, stretching as far as 48 km on a clear day. 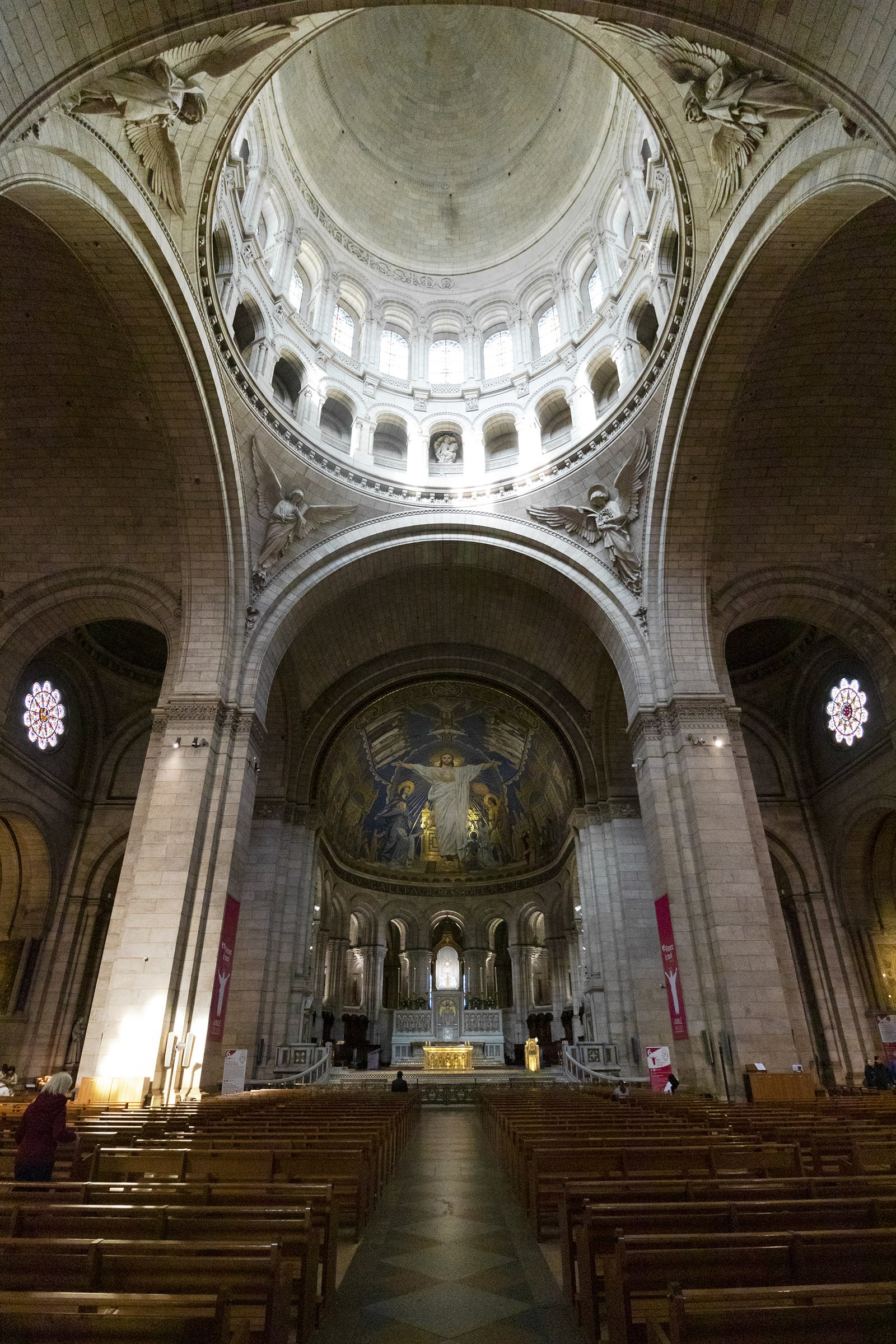 Some of the things to watch out for include:

The Basilica of Sacré-Coeur is free to visit and opens daily from 6am to 10.30pm.

You can access the dome every day for 8€ from 8.30am to 8pm from May to September, and from 9am to 5pm from October to April.

We recommend avoiding the crowds by visiting early in the morning or during the week. You’re also guaranteed to get spectacular views from Sacré-Coeur at sunrise or sunset!

Montmartre’s old village square is the highest point in Paris and the best place to get the most authentic souvenirs of Paris. Located a stone’s throw from Sacré-Coeur, it’s always crowded with artists selling their works and setting up their easels. From extraordinary painters to caricaturists and portraitists, there’s something for everyone.

It’s actually pretty hard to earn a spot to sell your artwork on Place du Tertre. The artists compete for a very limited number of places set by the local town hall, which only become available when another artists passes or moves away. To be accepted, they need to submit a portfolio with their work first. There’s currently a ten year waiting list! 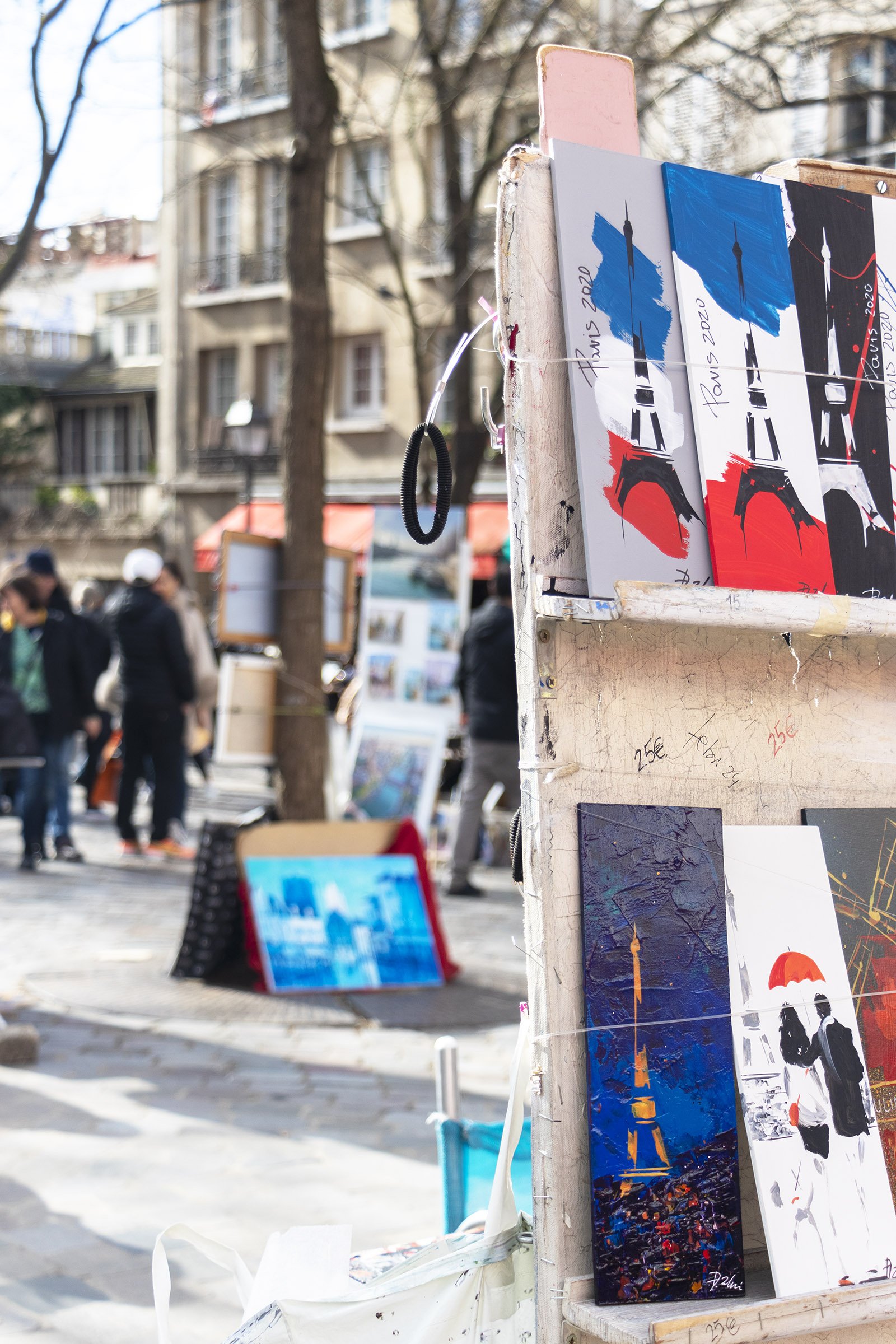 Founded in 1960 and recognised as a Musée de France in 2003, the Musée de Montmartre is the oldest building in the 18th arrondissement. It was also the former residence of prominent artists including Pierre-Auguste Renoir, Maurice Utrillo and Suzanne Valadon.

Now, this charming museum offers an unparalleled view into Montmartre’s history and culture through its permanent collection. Several temporary exhibitions are also open throughout the year. For a complete visit, don’t forget to check out the three Renoir Gardens (Jardins de Renoir), which have been renovated according to the artist’s paintings. They also offer a beautiful view of Clos Montmartre and Paris’ northern green hills.

Note: always check the opening times beforehand to make sure these are in line with the current COVID-19 measures.

Le Clos Montmartre is the oldest vineyard in Paris. A gateway to the Paris of the past, if offers a Provence-like atmosphere just a few steps away from La Maison Rose and Musée de Montmartre. It was created in 1933 by the City of Paris to prevent the land from being transformed into a residential development.

Although generally closed to the public, you can explore it for free for a few short weeks during the annual grape harvest festival in Montmartre (Fête des Vendanges) every Autumn. The Montmartre grapes are then brought to the local city hall to be fermented and bottled. Up to 1,500 bottles are produced and then auctioned each year – selling for quite high prices! The profits are then given to local Parisian charities.

The Wall of Love is a mural dedicated to love and reconciliation by artists Frédéric Baron and Claire Kito. You can find it by the Place des Abesses, in the gardens of the Place Jean-Rictus. The piece of art features 612 tiles of enamelled lava covered in the words “I love you”, 311 times in 250 different languages. Also notice the red notes representing the pieces of a broken heart that the wall tries to bring together. 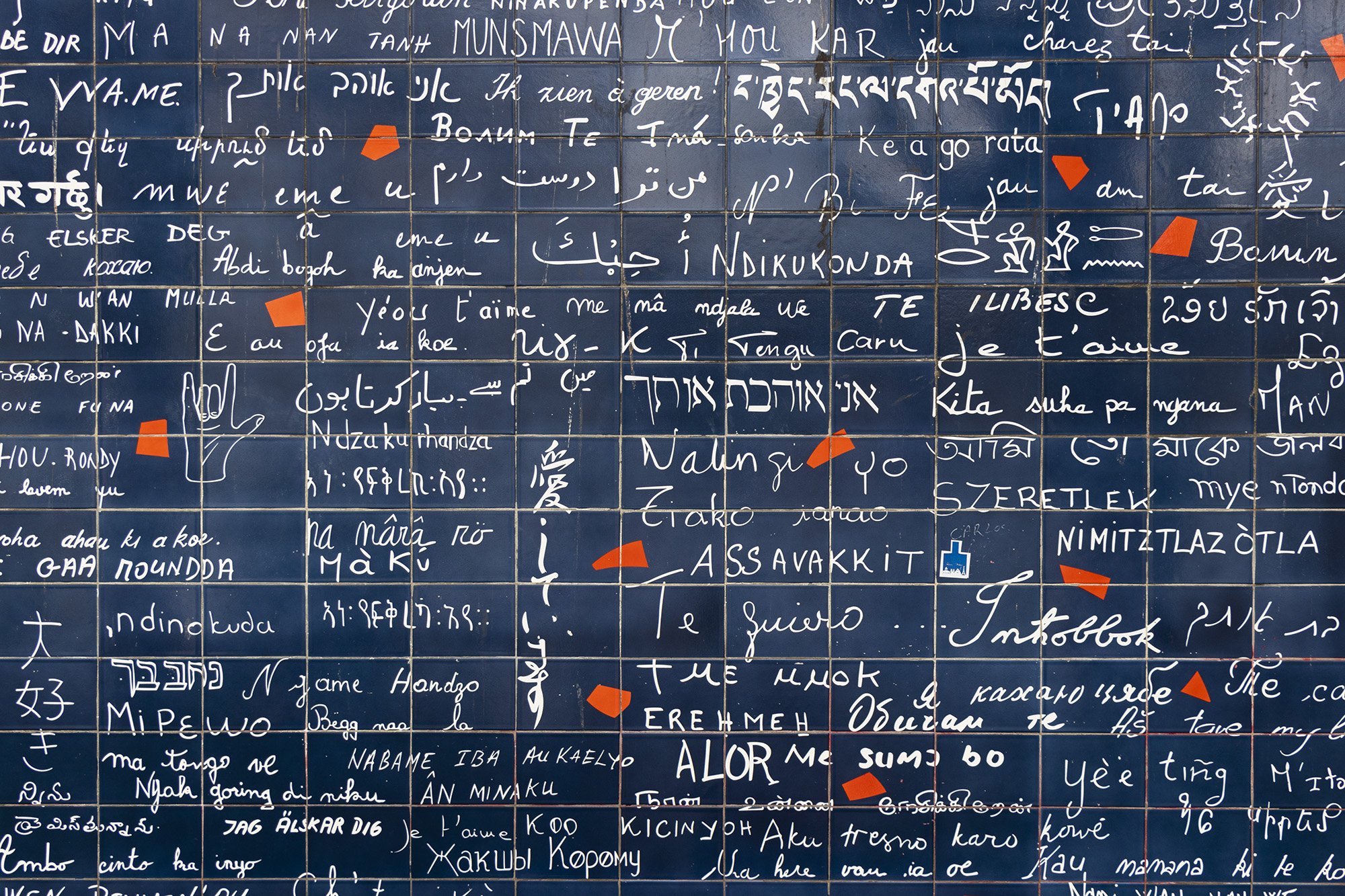 Paris’ cabarets are famous all over the world for their incredible synchronised choreographies and their elaborate shimmering costumes. Home to the Can-Can since 1889, the Moulin Rouge is a symbol of the nightlife of the belle époque and a must for everyone visiting the City of Lights. Artist Henri de Toulouse-Lautrec immortalised these with sketches and posters of dancers, such as Le Chat Noir and La Goulue. You can spot some of them at the Musée d’Orsay. 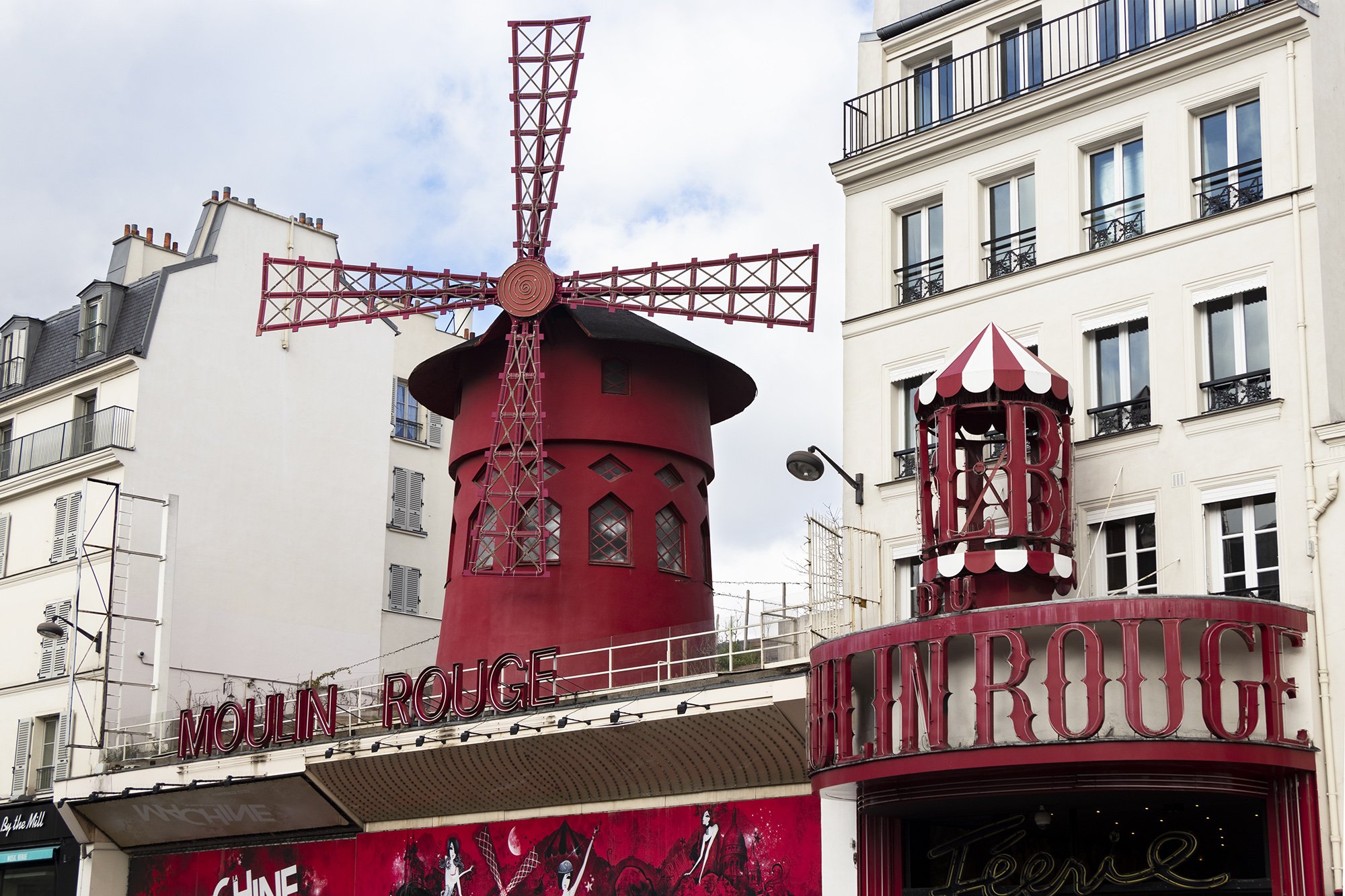 The red windmill on the Moulin Rouge that we see today isn’t actually the original one from 1889. A devastating fire in 1915 threatened to shut the doors of the Moulin Rouge forever. However, after years of operating as a nightclub and singing venue, it returned to its original roots in the 1960s. Since then, all of the shows begin with the letter “F” in rotation – just like the ever moving red mill.

Despite its name, the Sinking House of Montmartre is actually an optical illusion that has become increasingly popular in recent years. In reality, the effect happens when you photograph the house and the slopping hill in front of it from an unusual angle.

You’ll be able to spot the Sinking House of Montmartre when walking up the grassy hill up to the Sacré-Coeur Basilica, just before reaching the top. Flip your camera around so the hill is horizontal, and voilà! You’ve got yourself a sinking house. 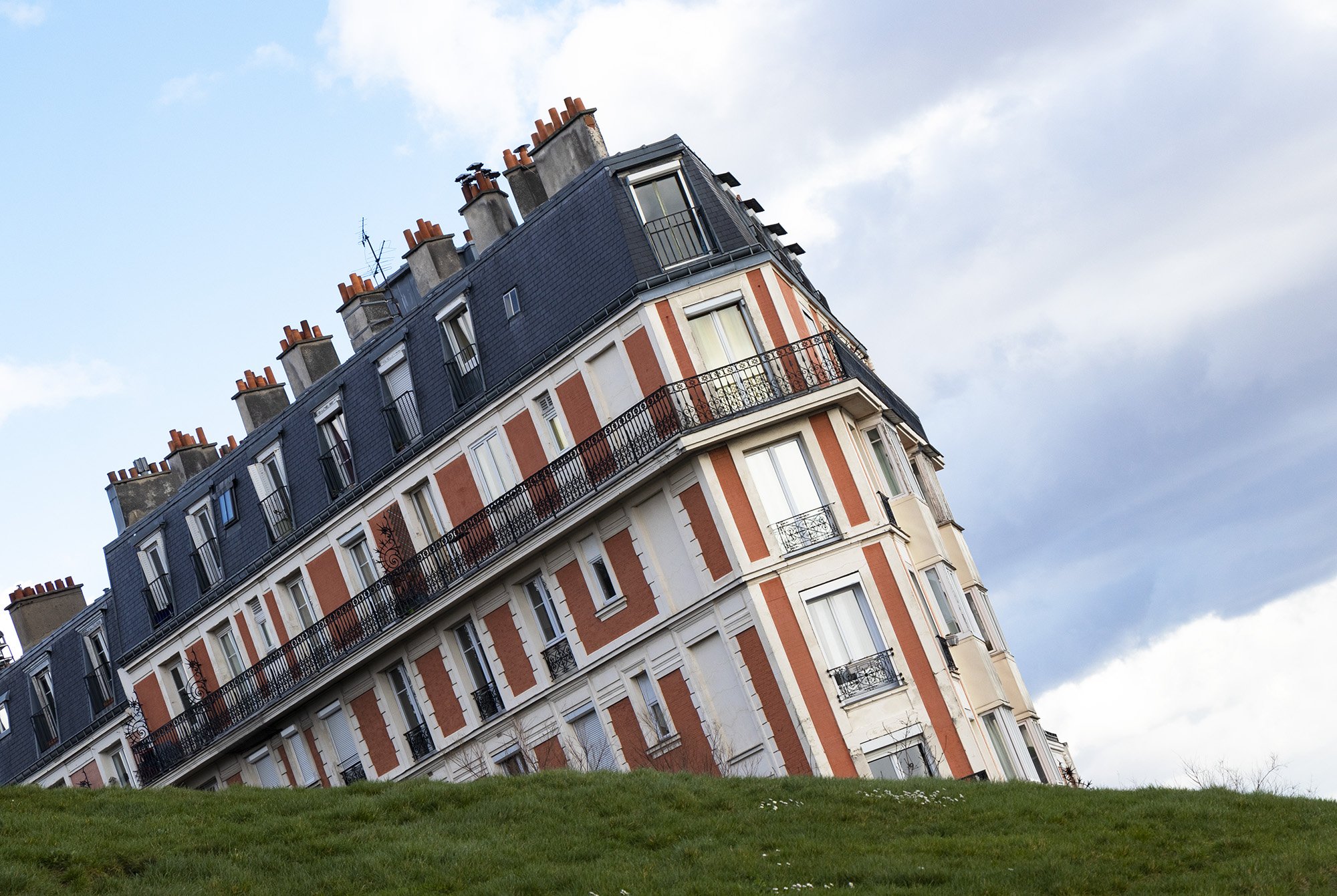 This is perhaps one of the most romantic and beautiful streets in Paris. Surrounded by trees and charming old Parisian houses covered in ivy, Rue de l’Abreuvoir instantly transports you to the Paris of the past. It’s best enjoyed when walked from bottom to top – with the dome of the Sacré-Coeur looming above the rooftops. At the end of the street, you’ll spot the most famous restaurant of Montmartre – La Maison Rose. This pink house with green shutters is a must in any visit to the city of love!

9. Where to eat and drink in Montmartre? 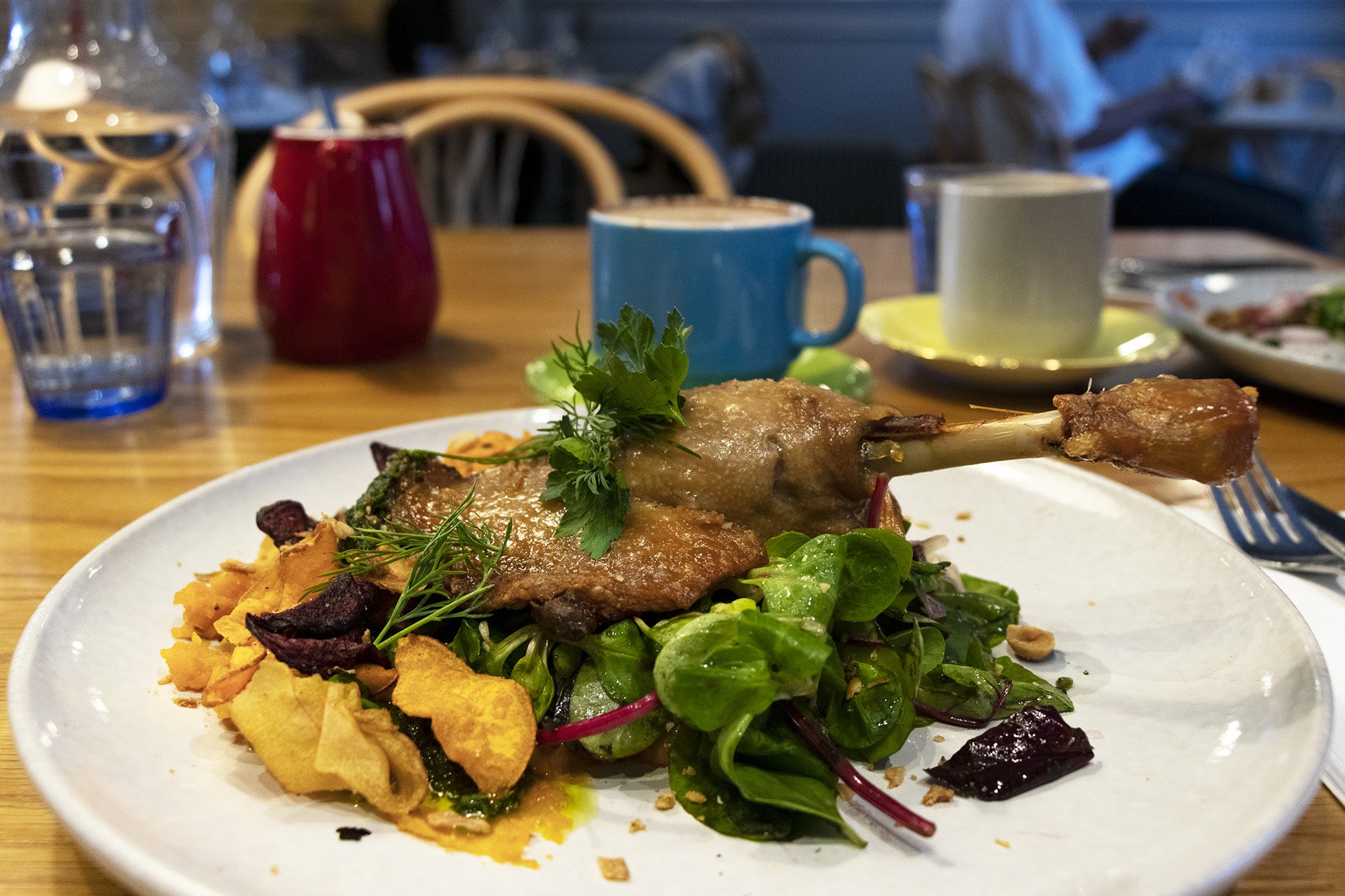 The easiest way to go to Montmartre is by metro. There are two lines you can choose from:

Have you been to Montmartre before? Are there any other things to do in Montmartre you’d recommend? As always, if you loved our post, please leave us a comment, pin some photos and show us some love on social media using the buttons below.

If you love France, why not check:

Valentine’s Day in Paris: Romantic things to do in Paris