With a strategic location overseeing the city of Prague and the Vltava, Prague Castle (Pražský Hrad) is not only the biggest castle in the world but also the most important landmark in the Czech Republic. Now a UNESCO World Heritage site, the grounds of Prague Castle are home to significant historical buildings connected by picturesque squares and alleys. Its origins are linked to Prince Bořivoj in the 880s and historically served as residence to the Kings of Bohemia. In 1918, Prague Castle became established as the official residence of the President of the Czech Republic.

Over the years, the castle and grounds have undergone several changes and expansions, creating a walled architectural complex containing buildings of all kinds. The grounds are home to religious including St. Vitus Cathedral and government buildings including The Old Royal Palace to exhibition halls, museums and antique shops. This makes it one of the best ways to see the capital’s development throughout the years. Of course, I’ve put a little itinerary together to help you see the best of what Prague Castle has to offer. 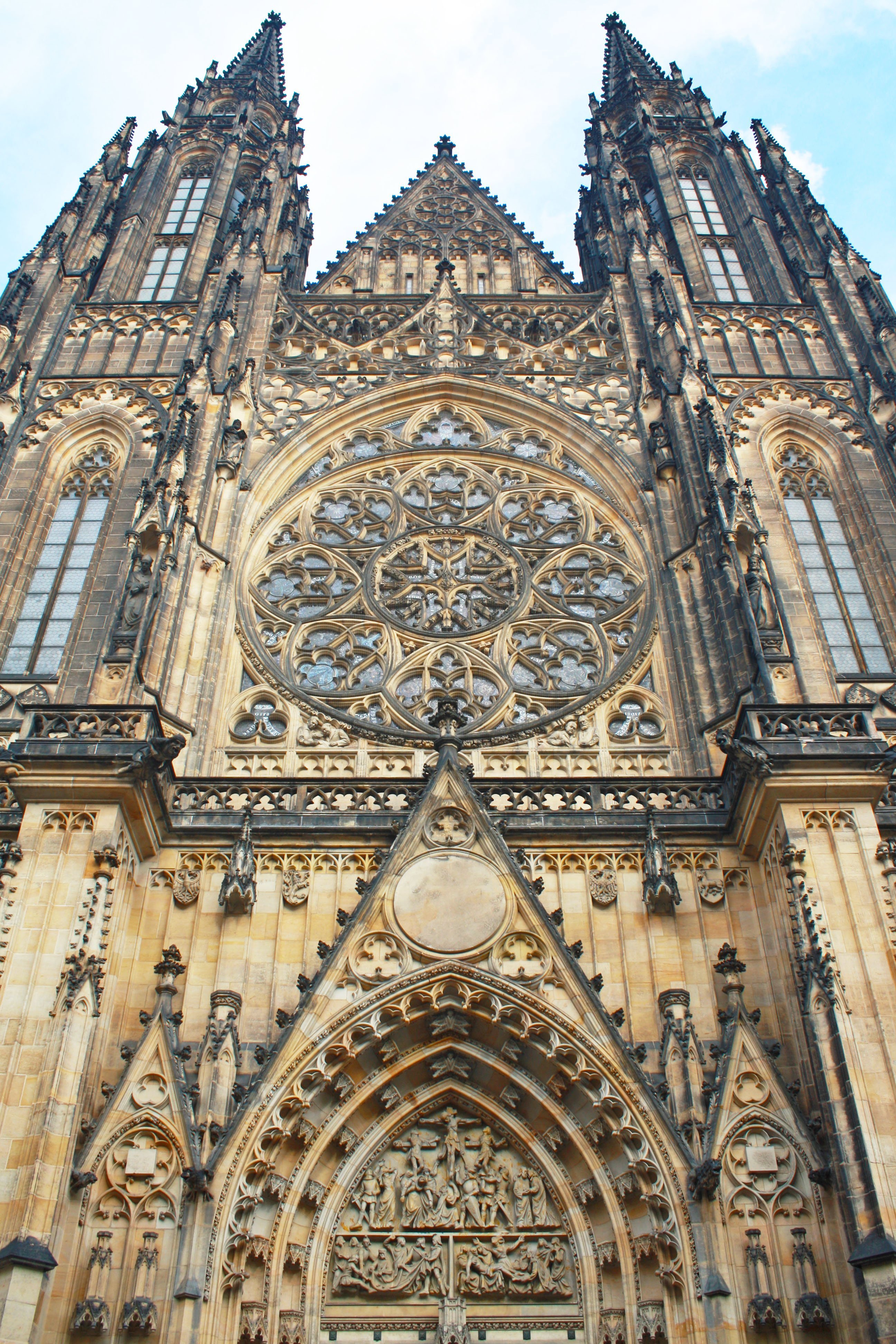 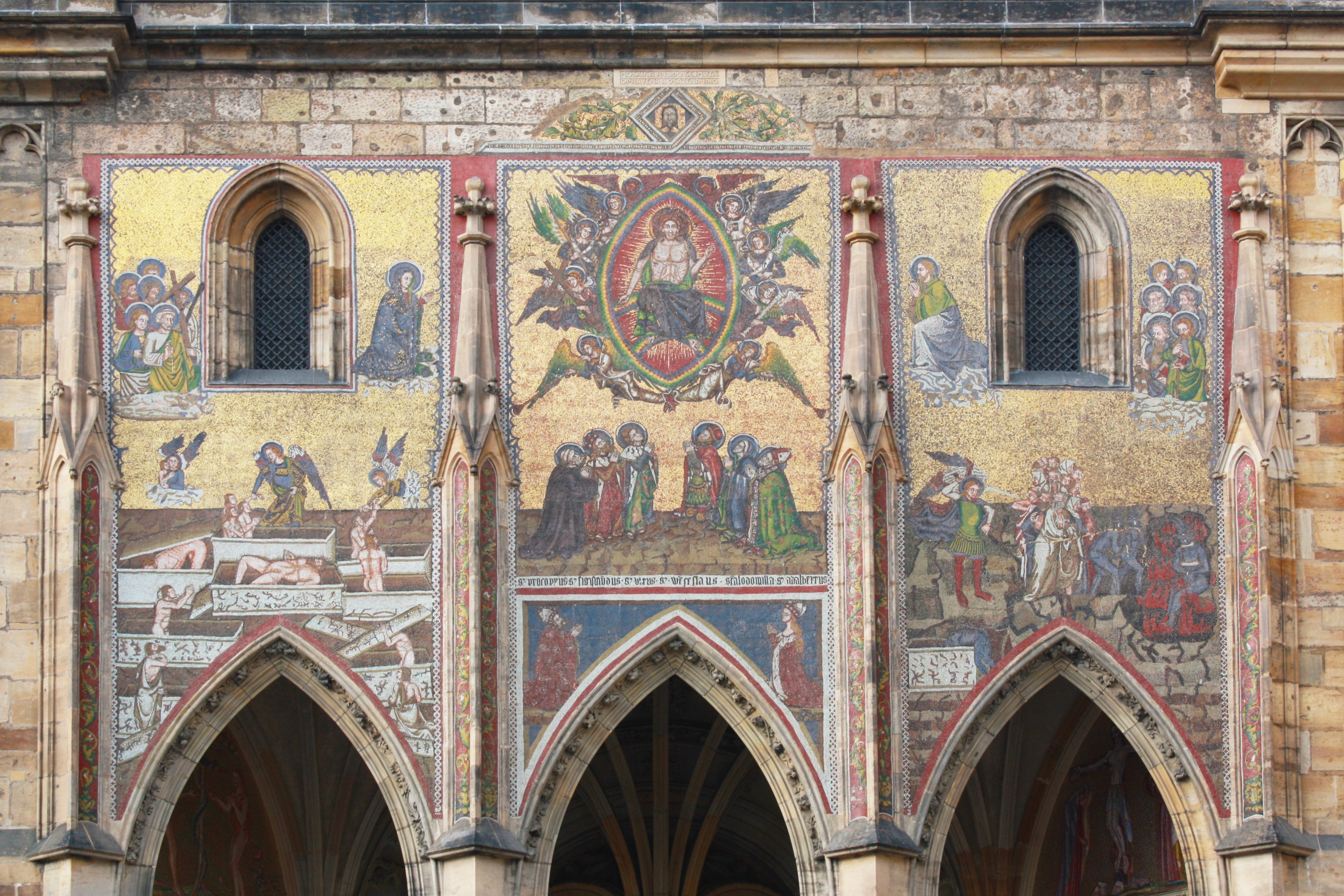 St. Vitus Cathedral is the largest and most important cathedral in the Czech Republic. Dating back to the 14th century, it’s the third church on the site and a great example of Gothic architecture. Designed by Petr Parléř (mastermind behind the iconic Charles Bridge), St. Vitus Cathedral took almost 600 years to complete. The cathedral is now home to the Bohemian crown jewels and crypts of Bohemian royals and Holy Roman emperors. Look out for the tombs of St. Vitus, St. Wenceslas, Charles IV and St. John de Nepomuk among others!

Top tip: don’t miss out the Great South Tower of the Cathedral for great views over the city! On the outside you can also see the Golden Gate. Charles VI commissioned this impressive mosaic depicting the Last Judgement in 1370. 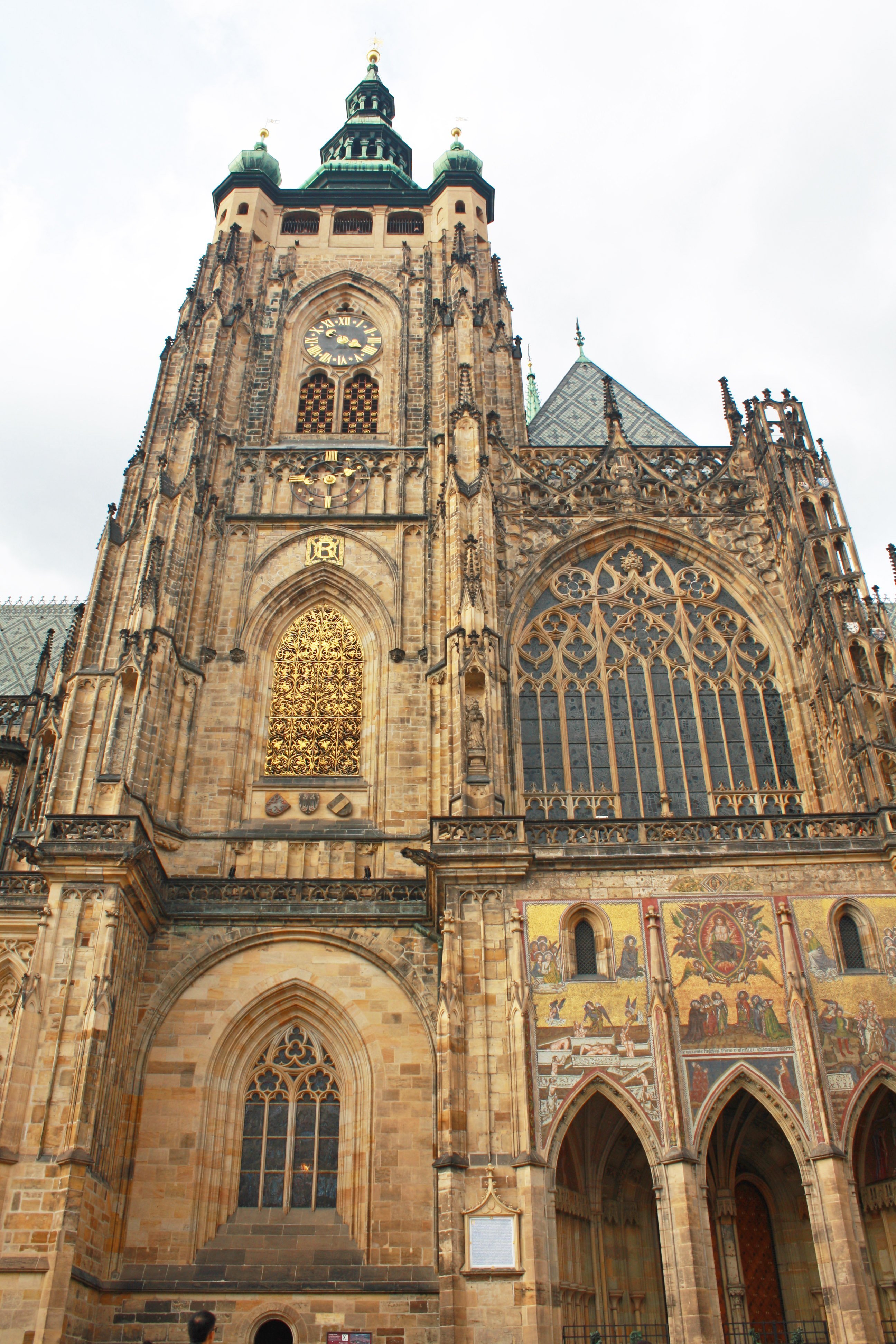 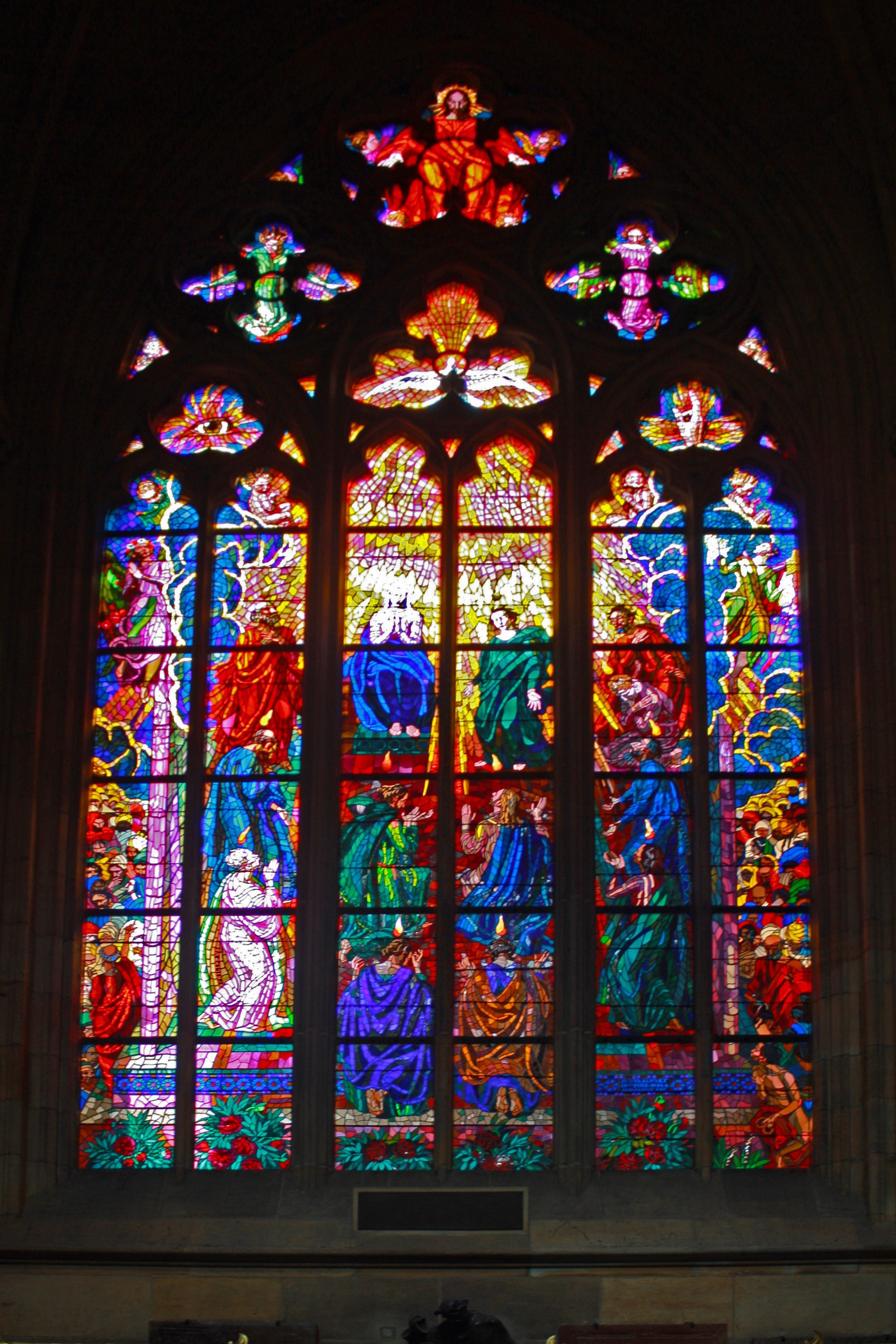 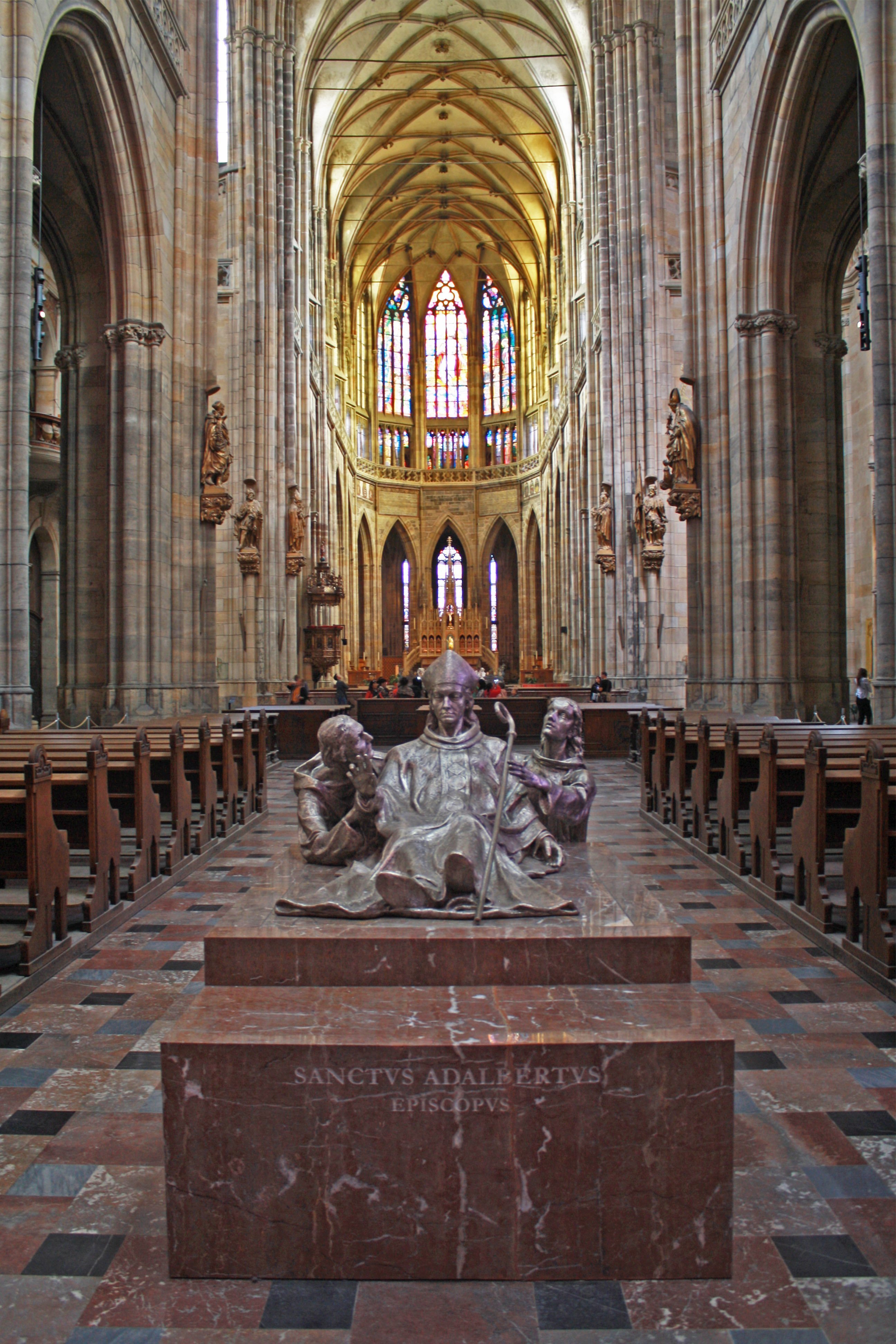 Known as the “street of alchemists”, this charming alley is full of colourful buildings and artisan shops that were home to the royal goldsmiths back in the 17th century. Although the King’s alchemists never actually lived on the grounds but in the actual castle, this didn’t stop the Golden Lane in Prague from becoming the focus of a few legends. According to these, they tried to make the philosopher stone/elixir of youth and transform metals into gold! Truth or not, the Golden Lane has had an undeniable appeal throughout the years – Franz Kafka himself lived in number 22 for almost two years!

Another must is the Old Royal palace, the original main residence of the Kings of Bohemia until the 16th century. It was built in a Gothic and a Renaissance style, with the remains of the former 12th century stone Romanesque structure preserved underground. Don’t miss the beautiful late Gothic-ceiling at the Vladislav Hall (Vladislavský Sál) and the Bohemian Chancellery (České Kanceláře), where Prague’s second defenestration took place on May 23 1618. Prague’s Governors at the time were thrown out of the window and luckily survived! 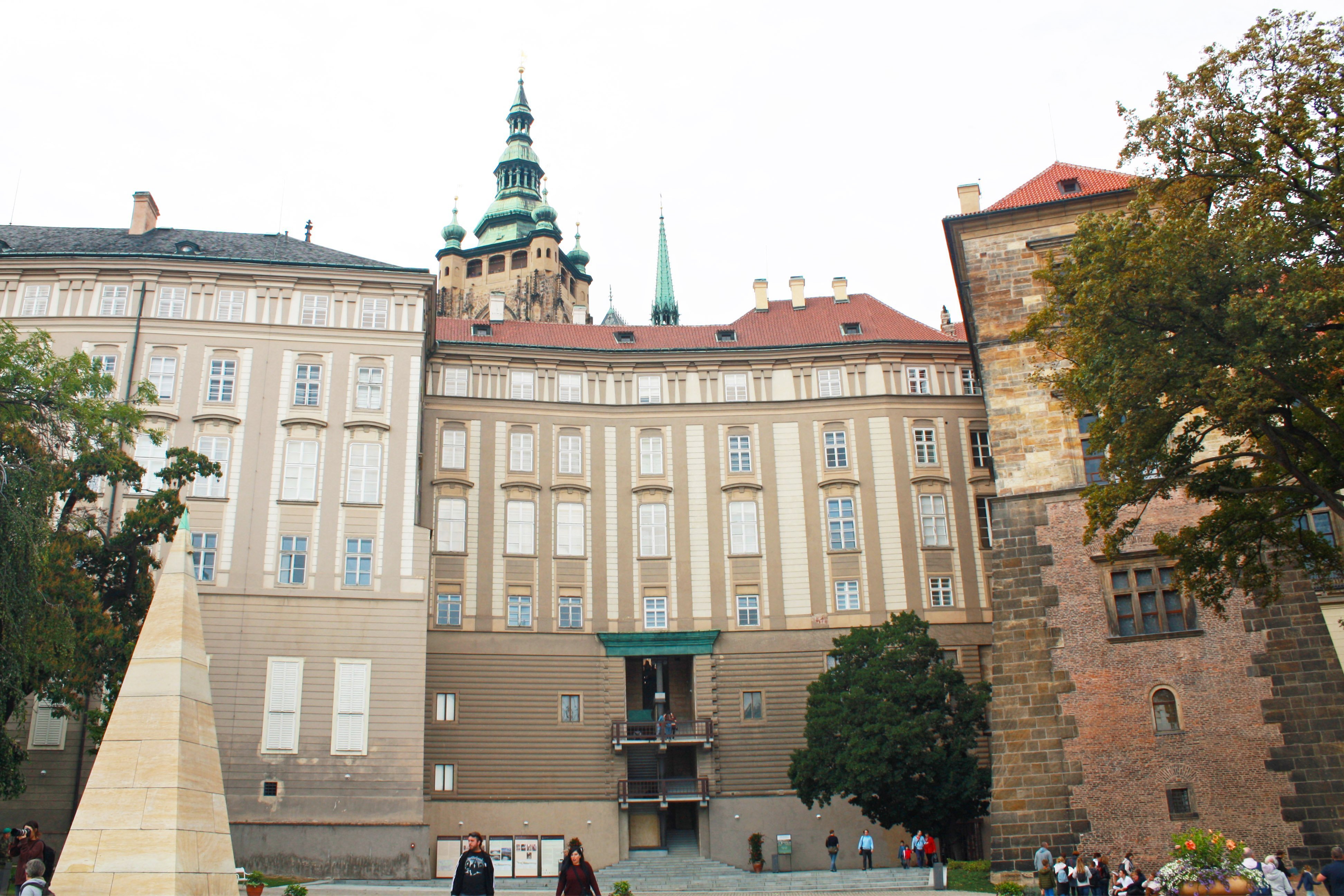 Rosenberg Palace, the main residence of the noble Rosenberg family, was built after their houses were destroyed in the fire of Prague Castle in 1541. Located in Jiřská street, it was acquired by emperor Rudolph II in 1600 and directly connected to the Royal Palace. Although originally a Renaissance palace, Rosenberg Palace was rebuilt in a Baroque style in the 17th century to host the Institute of Noblewomen. Here, 30 unmarried women from noble families who were older than 24 were educated. 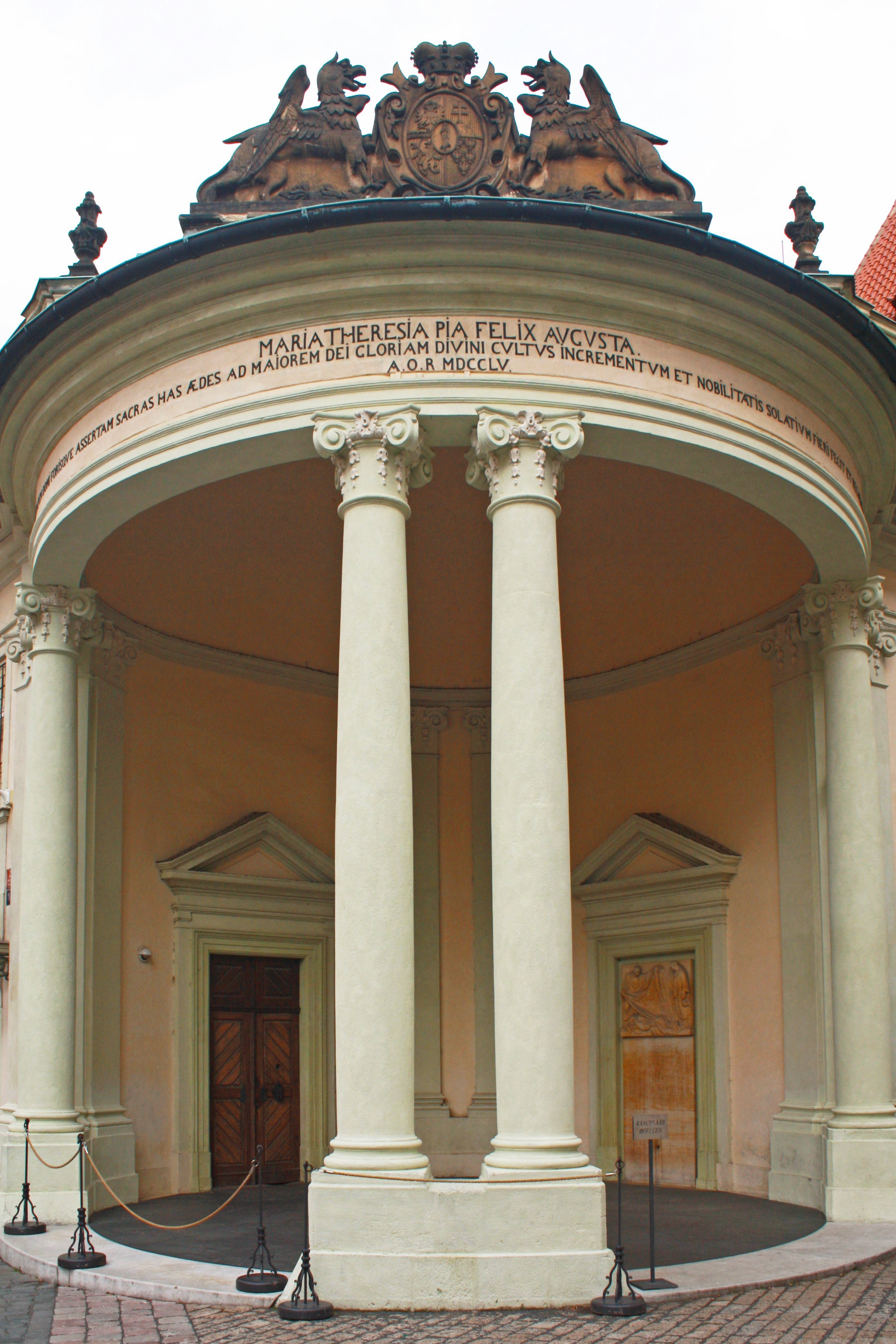 Built in 920, St. George’s Basilica is the oldest building in the grounds of Prague Castle. Although initially built in a Romanesque style, the basilica underwent some structural changes following a fire in 1142 and now features a 17th century red Baroque façade. St. George’s Basilica is the burial place of the Přemyslid rulers and currently hosts concerts and the 19th century art collection for the National Gallery in Prague. 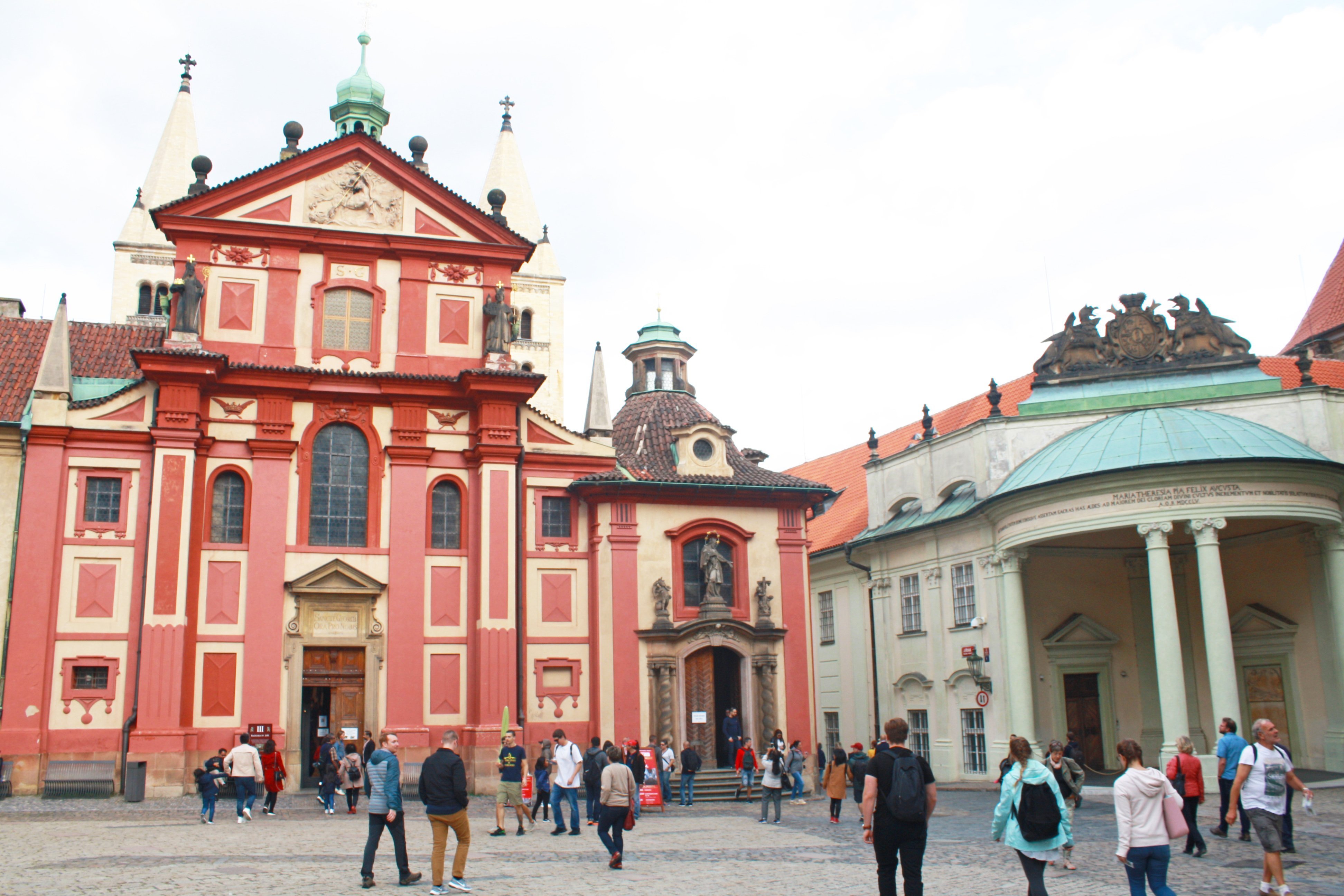 Similar to the Rosenberg Palace, Lobkowicz Palace was the residence of the Lobkowicz family when in Prague for more than 300 years. Built in the late 16th century, this is the only privately owned building in Prague Castle. Lobkowicz Palace currently contains the Lobkowicz Collection Museum with an extraordinary collection of paintings, ceramics and manuscripts, and a Baroque concert with daily classical music performances.

7. Prague Castle changing of the guard

The Armed Forces of the Czech Republic serving the President change their shift daily at at 12pm in the first courtyard of Prague Castle. Similarly to the Changing of the Guard in Monaco or London, this ceremony has become a major tourist attraction so make sure to get a nice spot. Also, look out for the President’s flag – if it’s there, it means he’s home! 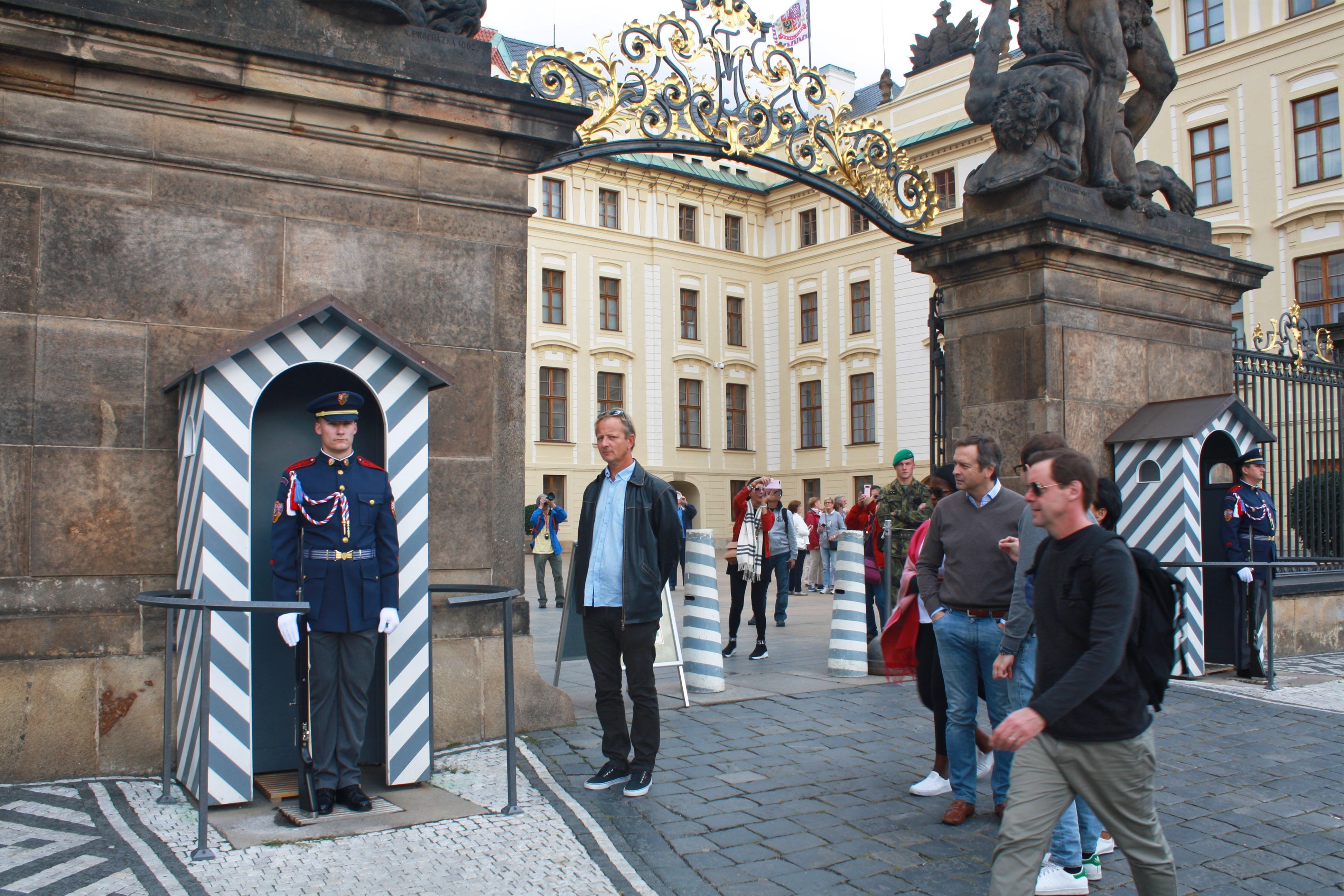 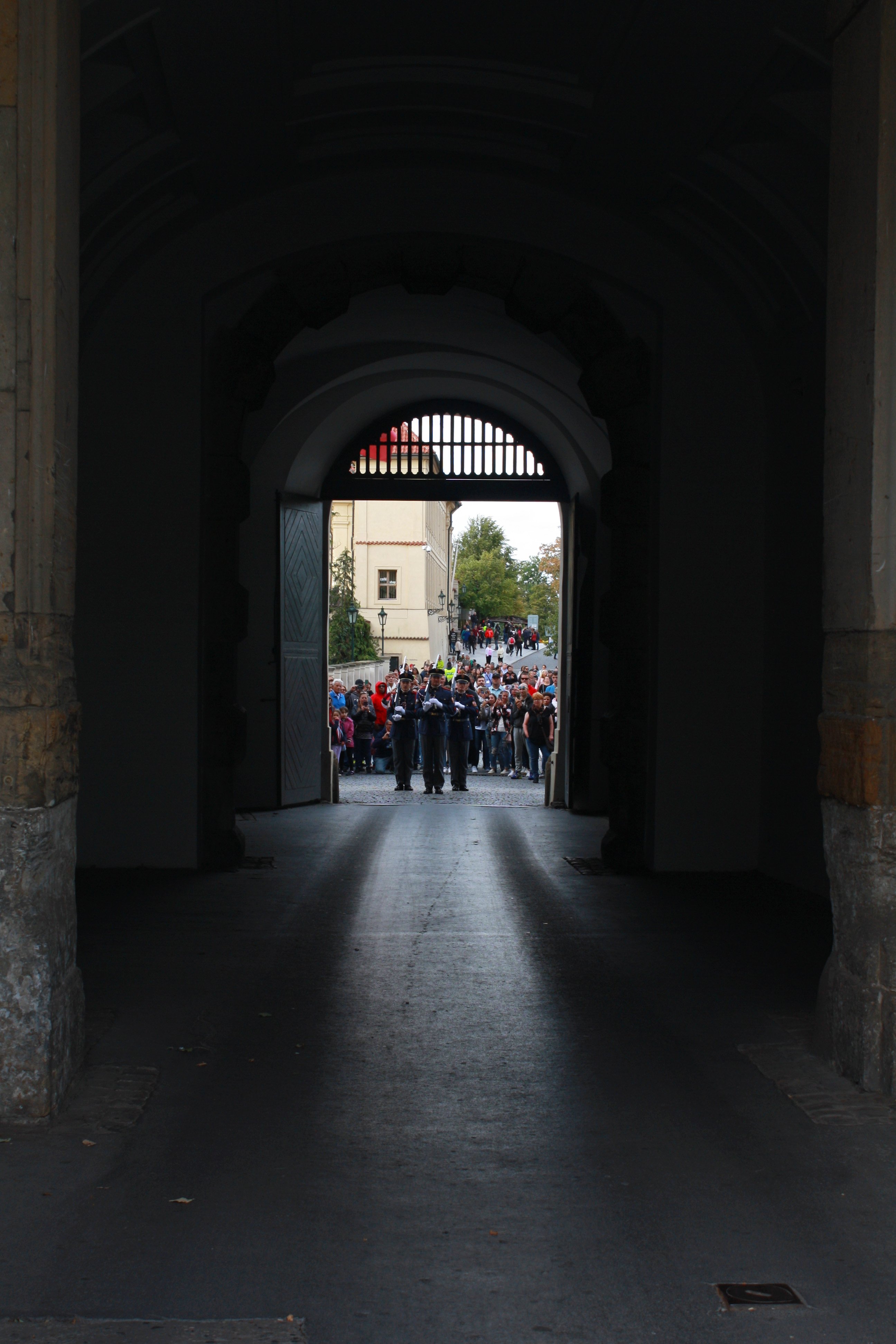 8. The Picture Gallery at the Prague Castle

A permanent exhibition of more than 100 European paintings from the 15th-18th centuries. Part of the personal collection of Emperor Rudolph II, these are a selection from over 4,000 works Prague Castle currently owns.

Don’t miss the opportunity to walk around the beautiful Palace Gardens and squares. With Renaissance, Baroque, Italian and Japanese elements (very much like the buildings they surround), they’re perfect for a leisurely walk surrounded by nature. Plus you get stunning views of Prague! These include the Royal Garden, South Gardens, Stag Moat and Gardens of the Bastion. 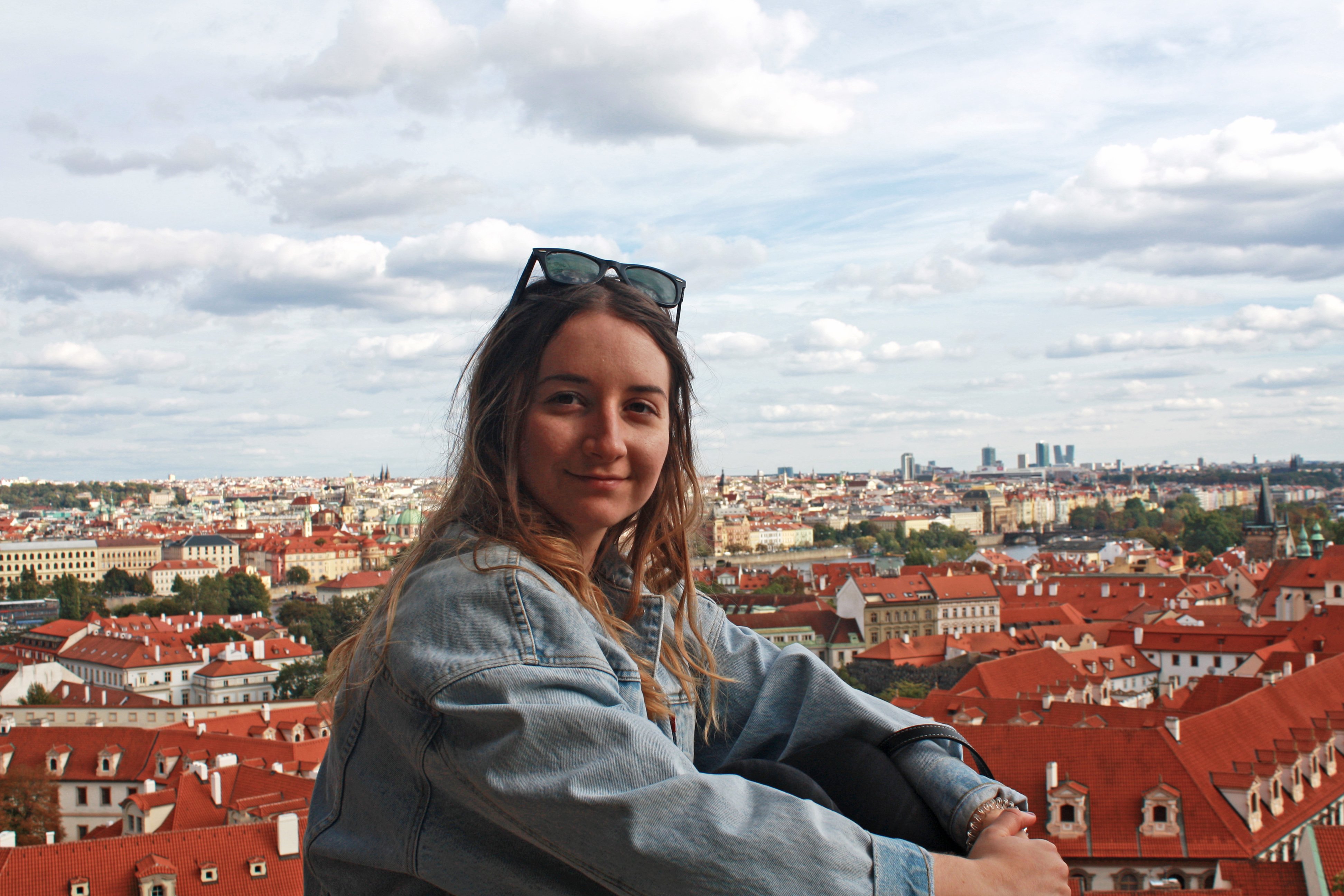 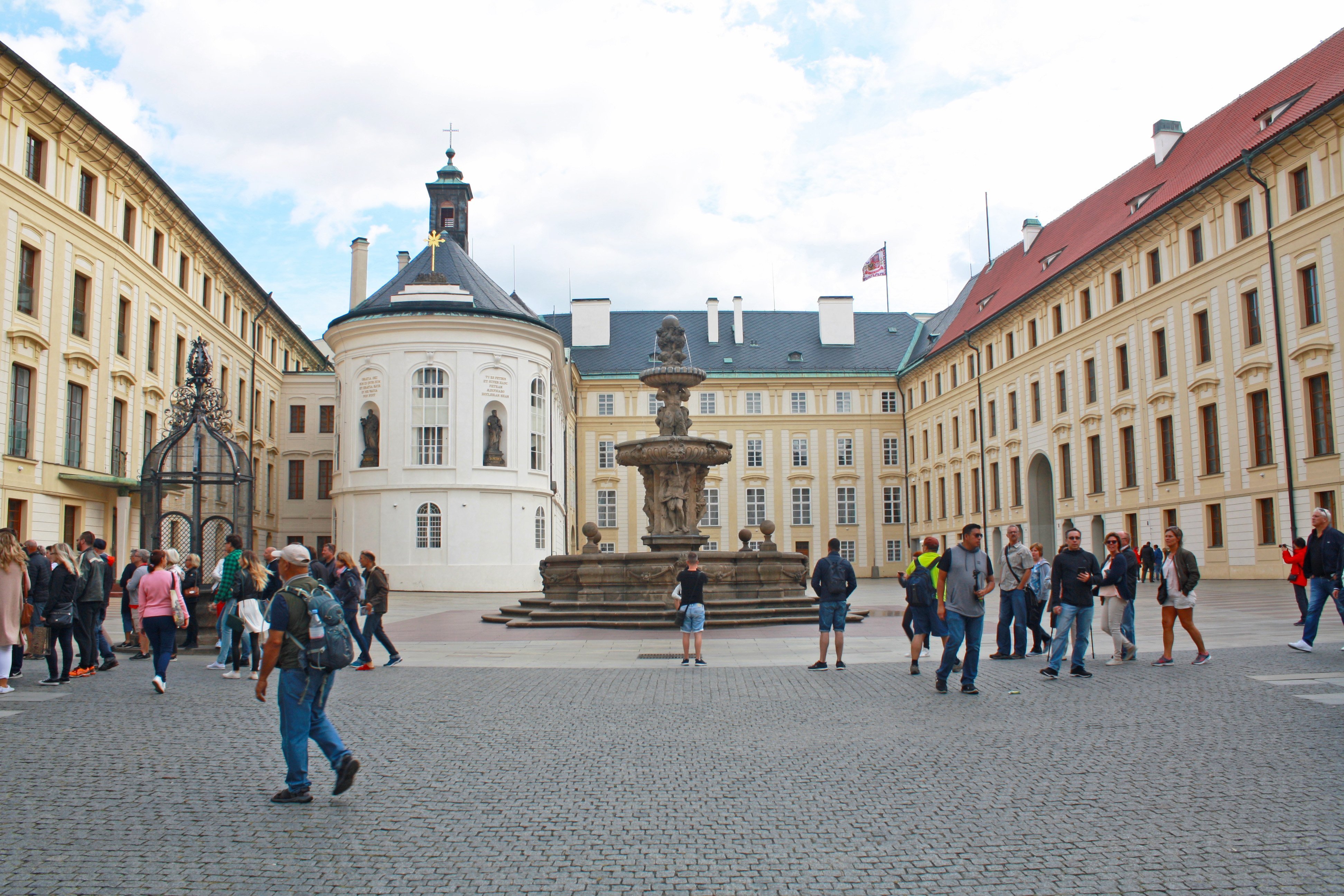 Although you need a ticket to access some parts of the castle (such as Old Royal Palace, St. George’s Basilica, Rosenberg Palace or The Picture Gallery at the Prague Castle), you can actually see most of it for free. You can also go up to a specific part of St. Vitus Cathedral without paying (just make sure you visit before 4.40pm) and also see the entirety of the Golden Lane if you go after 5pm!

Tickets can be purchased at the information centres inside the Prague Castle. 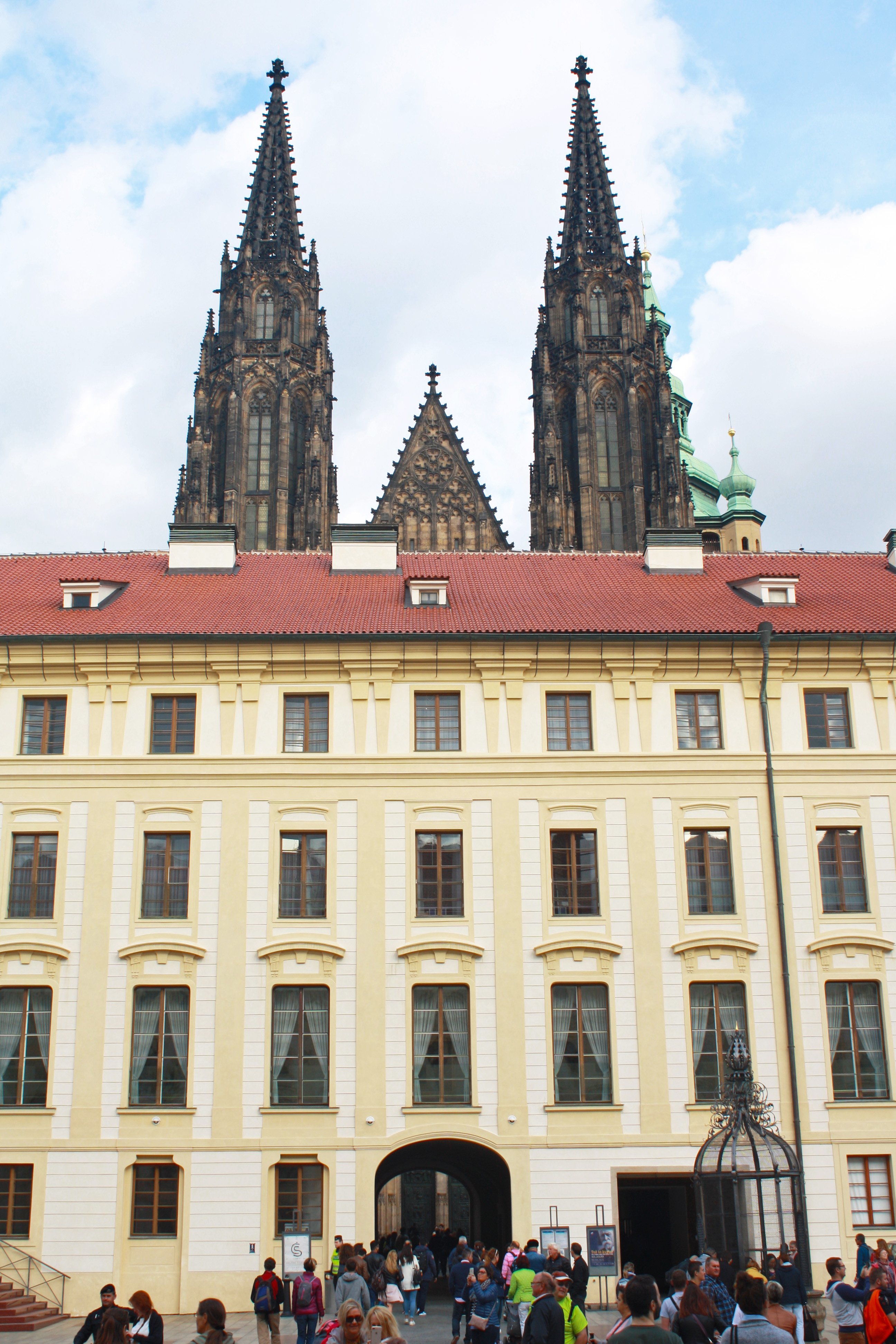 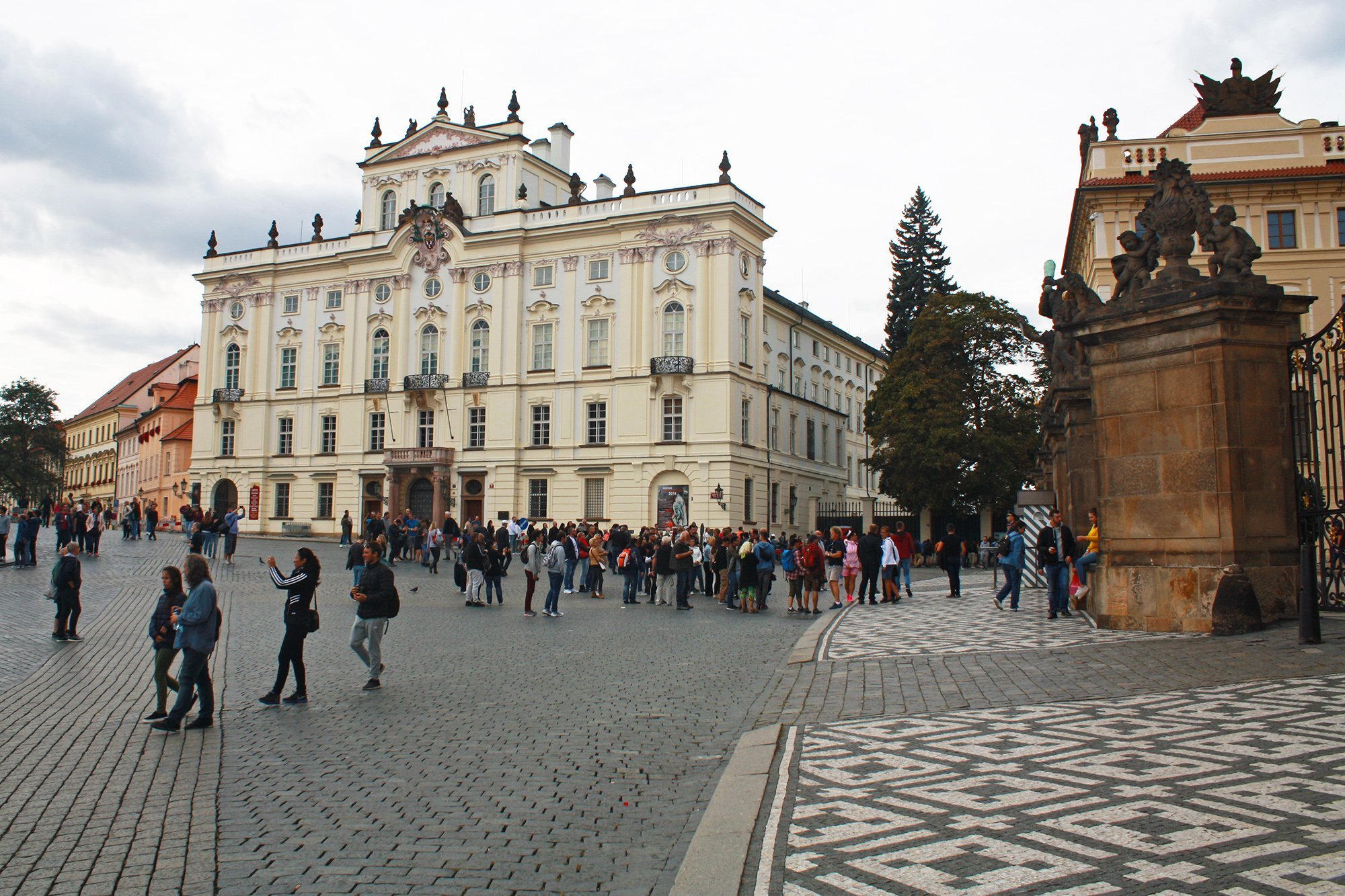 Have you been to Prague Castle before? Do you have a favourite castle you’ve visited? If you loved our Prague Castle post, please leave a comment, pin some photos and show us some love on social media using the buttons below

How to make: Banana bread with chocolate chips recipe