Porto was the last stop on our 10 day trip around Portugal. After a quick 24h stopover exploring the medieval streets of beautiful Coimbra, we quickly hopped on the next train to Porto and arrived in Estação de São Bento in just over an hour. The second biggest city in Portugal welcomed us with one of the prettiest railway stations in the world. I was delighted to see that the Portuguese azulejo tradition was equally predominant in Porto as it was in Lisbon. An incredible hand painted tilework by Jorge Colaço featuring more than 20,000 tiles covers the main hall’s interior, portraying scenes of some of the most important moments of Portugal’s history. I couldn’t help but admire the meticulous 20th century artwork that was in front of me (and was quick to update my Instagram stories, of course).

Was Porto going to be this beautiful everywhere? Uhm, YES! Porto is vibrant, colourful and full of history waiting for everyone to explore it. Here are our top 10 things to do in Porto. 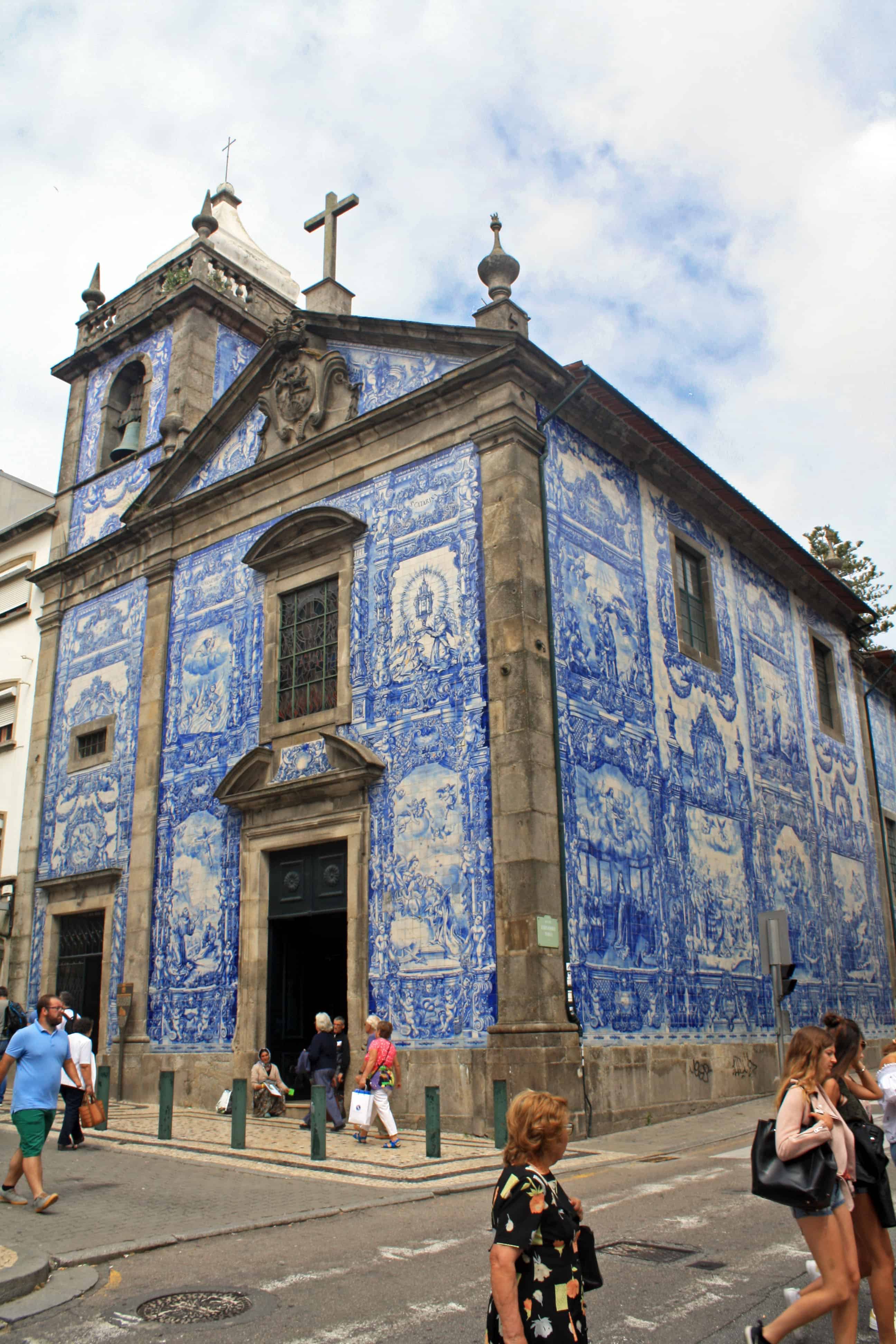 Captivating tiled façades wrap the exterior walls of multitude of buildings in Porto, especially those of ecclesiastical nature. True to Portugal’s catholic tradition, religious architecture is of great importance in Porto and it’s easy to find a church in every corner. Each more impressive than the last, their artistic style is heavily influenced by the different periods they were built in.

Great examples of Porto’s rich Baroque and Rococo heritage are the interiors of Igreja do Carmo and Igreja dos Carmelitas, standing at the corner of Praça de Carlos Alberto. Many people think they form one single building but, in fact, both churches are completely separated by a hardly noticeable 1m wide house standing in between. The narrow residence was inhabited until the 80s, but was initially built with the intention of avoiding all sorts of contact between monks and nuns living in blue and white azulejo-covered Carmo (right) and classical Carmelitas (left), respectively. 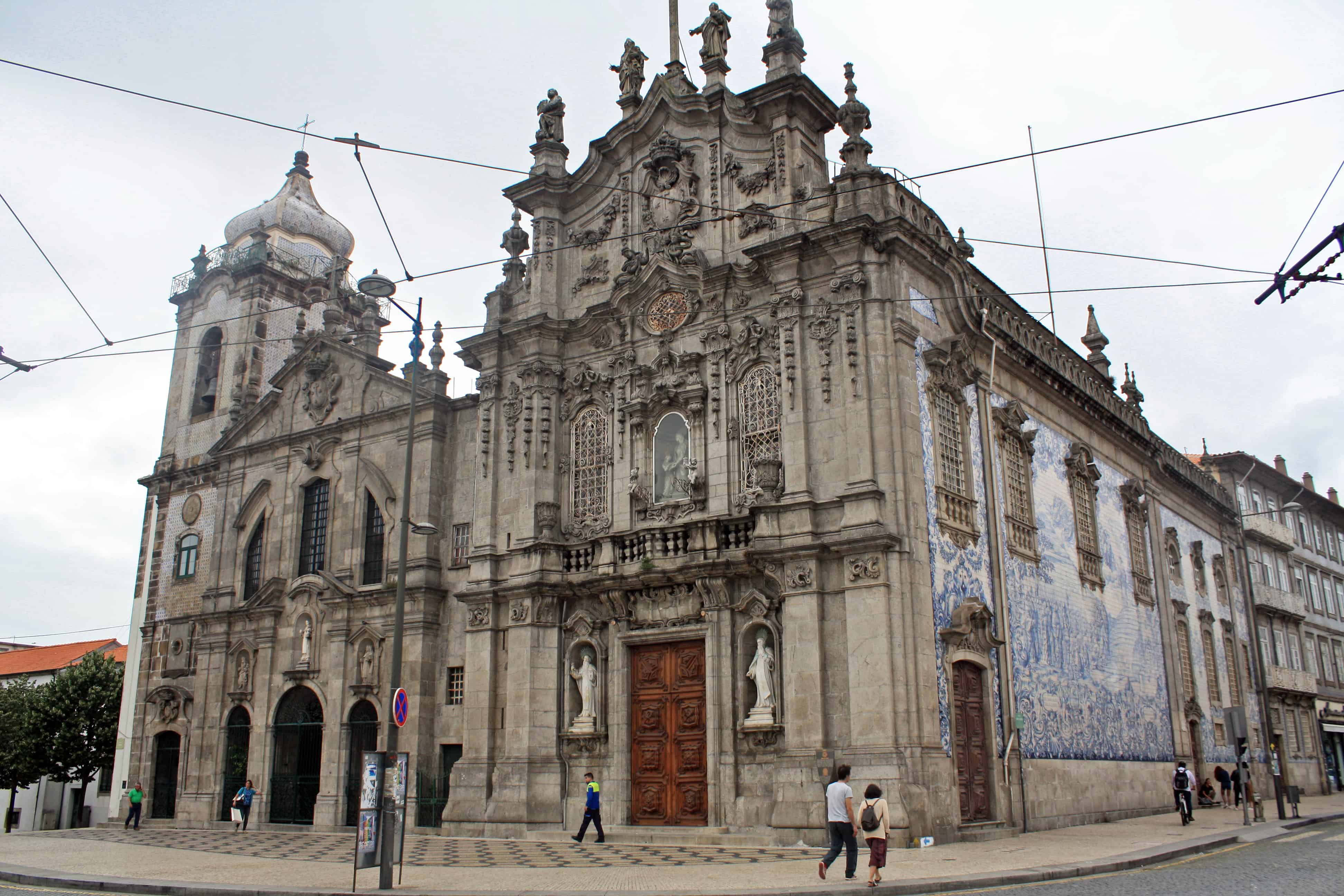 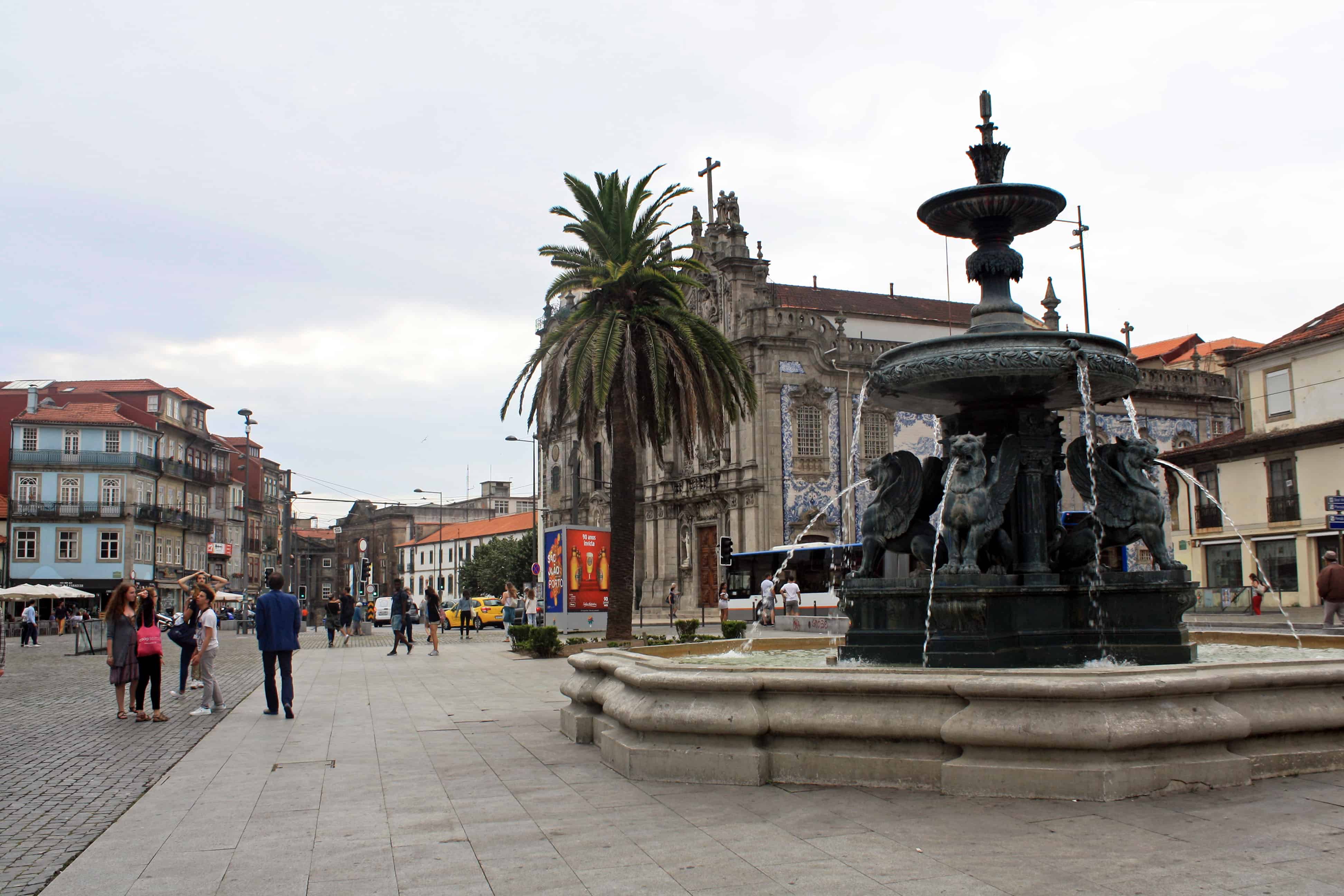 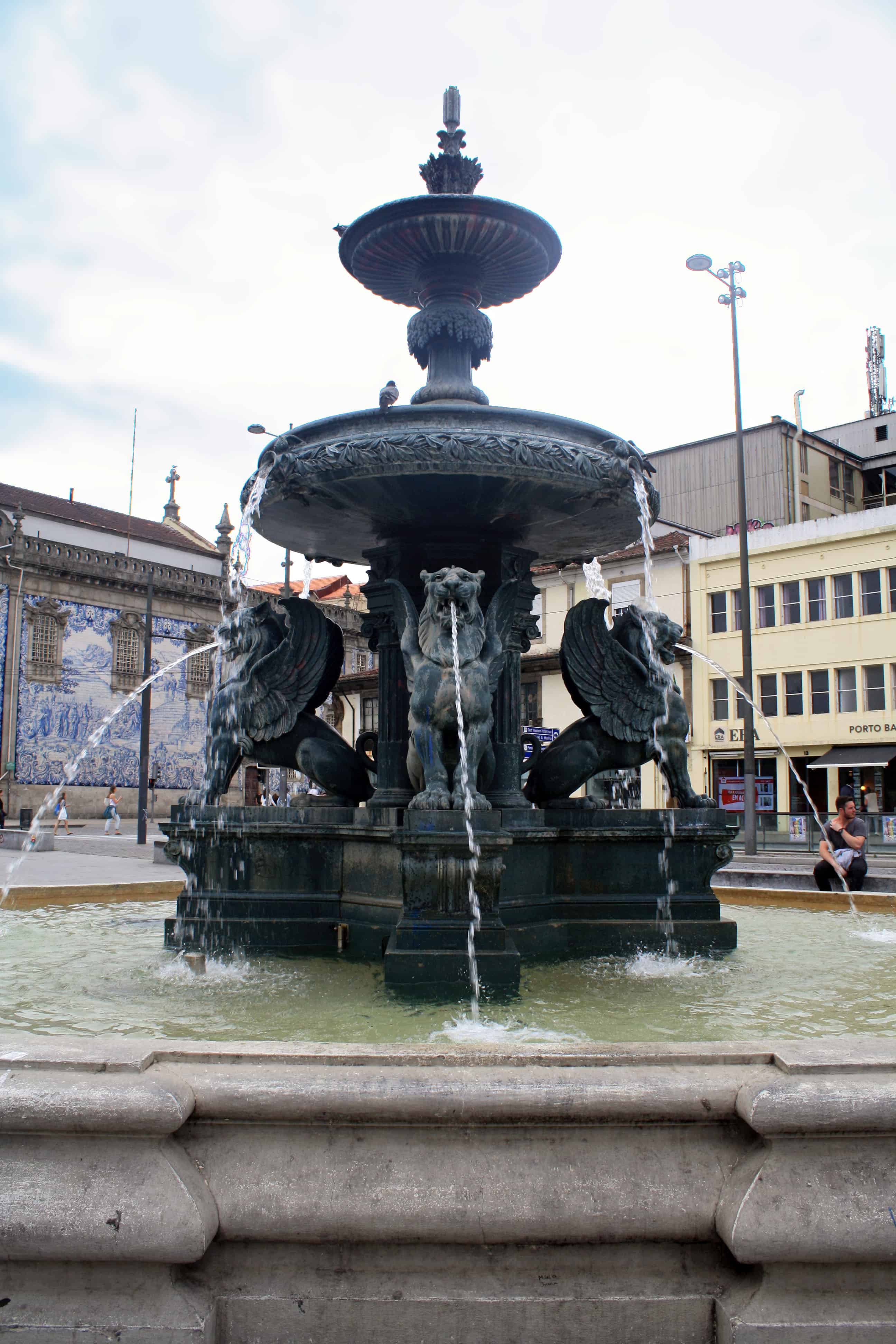 This extravagant and dramatic artistic style is also reflected in the façade of Igreja da Trindade, located near Porto’s Town Hall. Its exterior is topped with religious statues and a single bell tower, whilst its interior is a perfect example of meticulously carved  wooden altars, with oil paintings and elaborate ornaments on its marble walls. 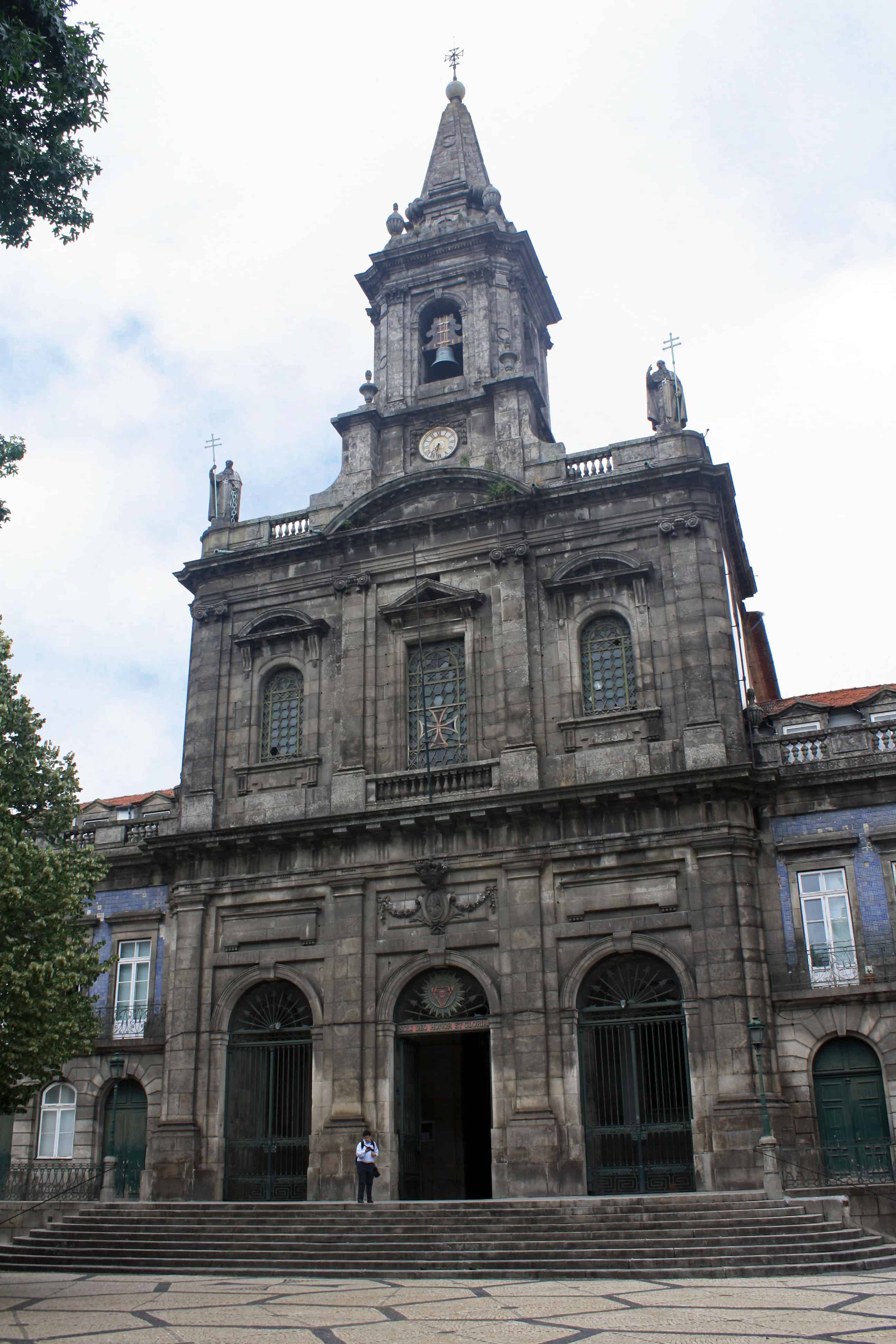 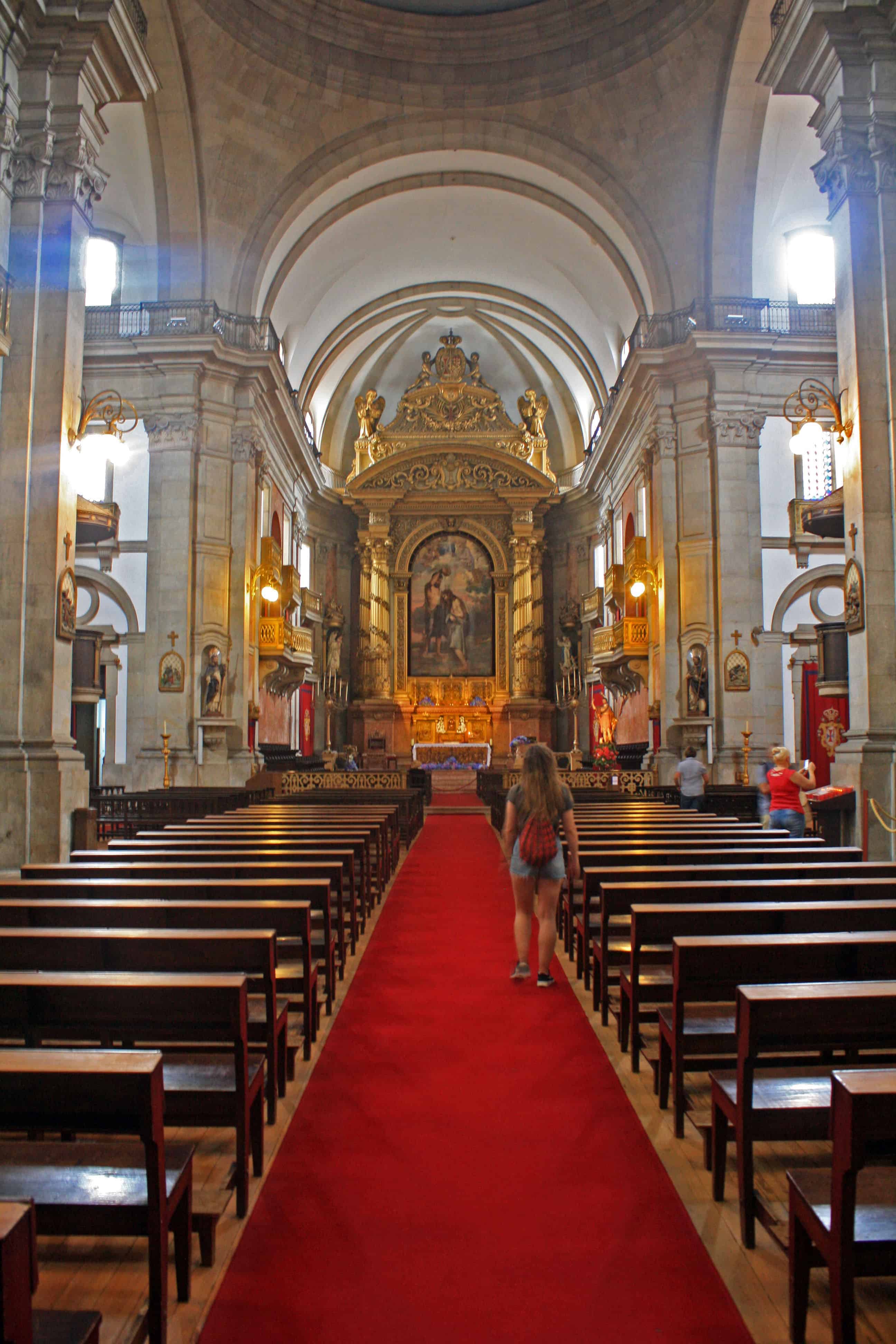 2. Go to the top of Torre dos Clérigos

One of the most emblematic religious buildings in Porto is perhaps Igreja dos Clérigos, an 18th century Baroque style church by Italian architect Nicolau Nasoni featuring a striking bell tower. At 249ft (76m), Clérigos Tower (Torre dos Clérigos) stands as the tallest campanile in Portugal and therefore the best viewpoint of the city. Walk up the 240 steps, past its 49 bells, and enjoy some of the most incredible panoramic views of Porto and the Douro River. Unfortunately, there is no lift so this is great for those looking for some good bum exercise! 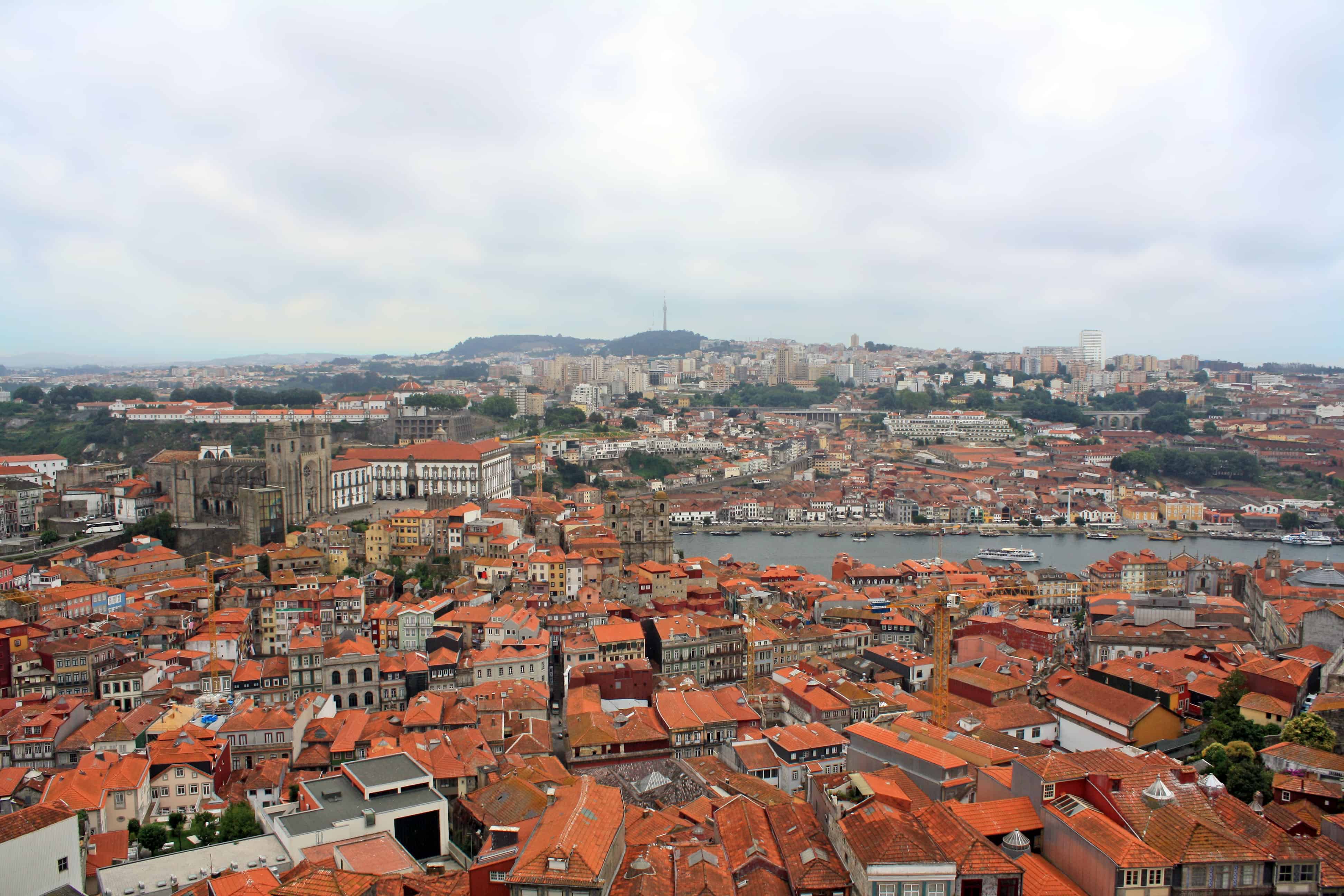 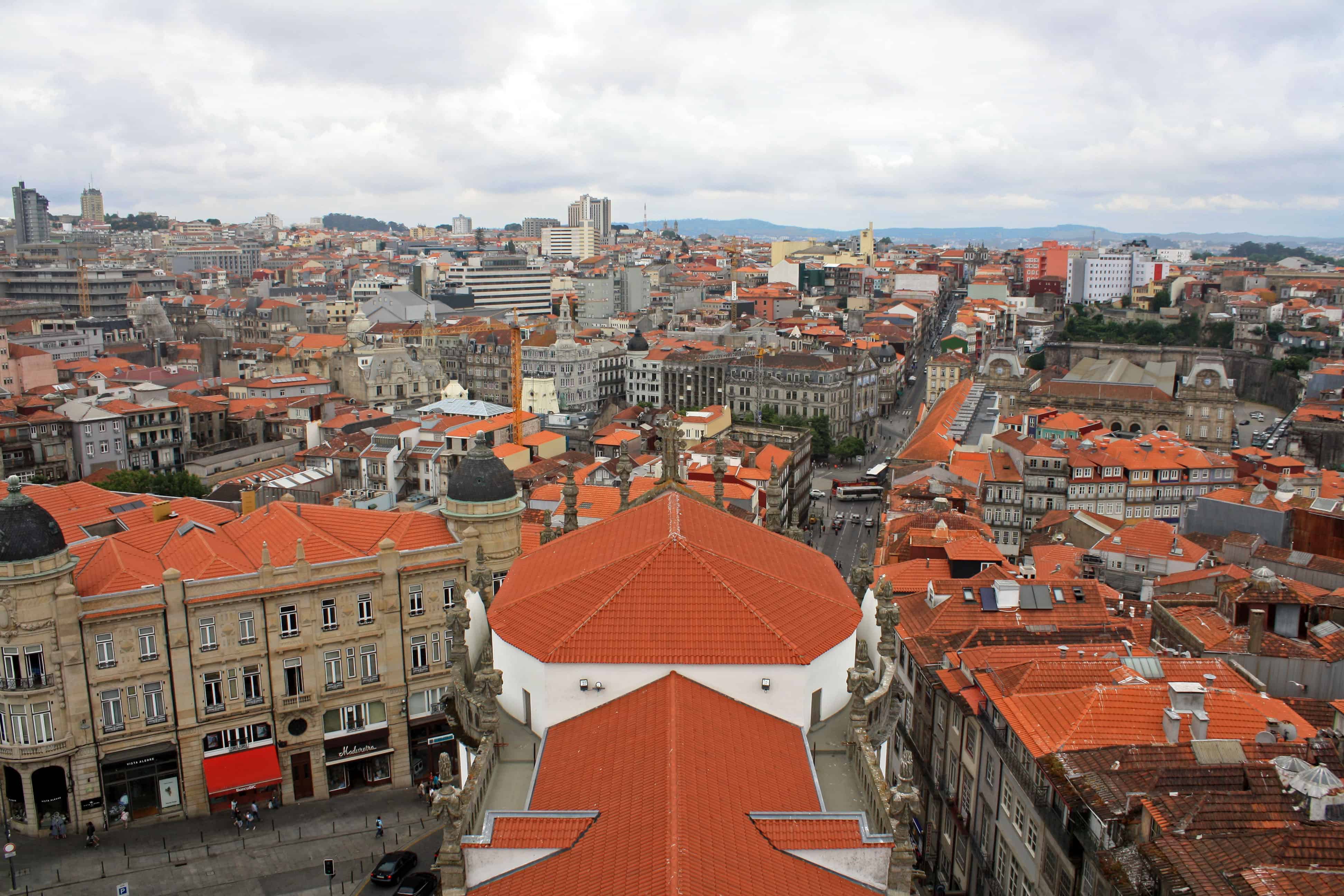 3. Explore the picturesque Ribeira and Sé do Porto

Don’t miss the opportunity to add Ribeira and Miragaia to your list. The vibrant riverside neighborhoods are characterised by narrow medieval streets, hilly cobbled alleys and picturesque old and colourful pastel houses, one on top of the other. Some of the best Portuguese food and Port wine sangría is also served here – head over to the many outdoor terraces and restaurants dotted along the promenade and soak in the beautiful iconic views of the Douro River.

As it separates from the port, Porto grows upwards towards its two hills – one of them topped with the Igreja and Torre dos Clérigos and the other, by Porto Cathedral (Sé do Porto). A symbol of Porto, this 12th century Romanesque Cathedral underwent various Baroque adaptations throughout the years and is now considered a National Monument. The historic centre surrounding it offers incredible views over Porto’s riverside houses and the Douro River and was declared UNESCO World Heritage Site in 1996.

Walking along Rua do Barredo, you’d be forgiven for missing Alminhas da Boa Fortuna (Shrines of Good Fortune). The small, inconspicuous blue shrine is mounted on a yellow wall under an inscription reading Senhor da Boa Fortuna, thus ”Lord of Good Fortune”. Legend says that visitors who stop at the shrine will receive good fortune so it’s definitely worth looking for! 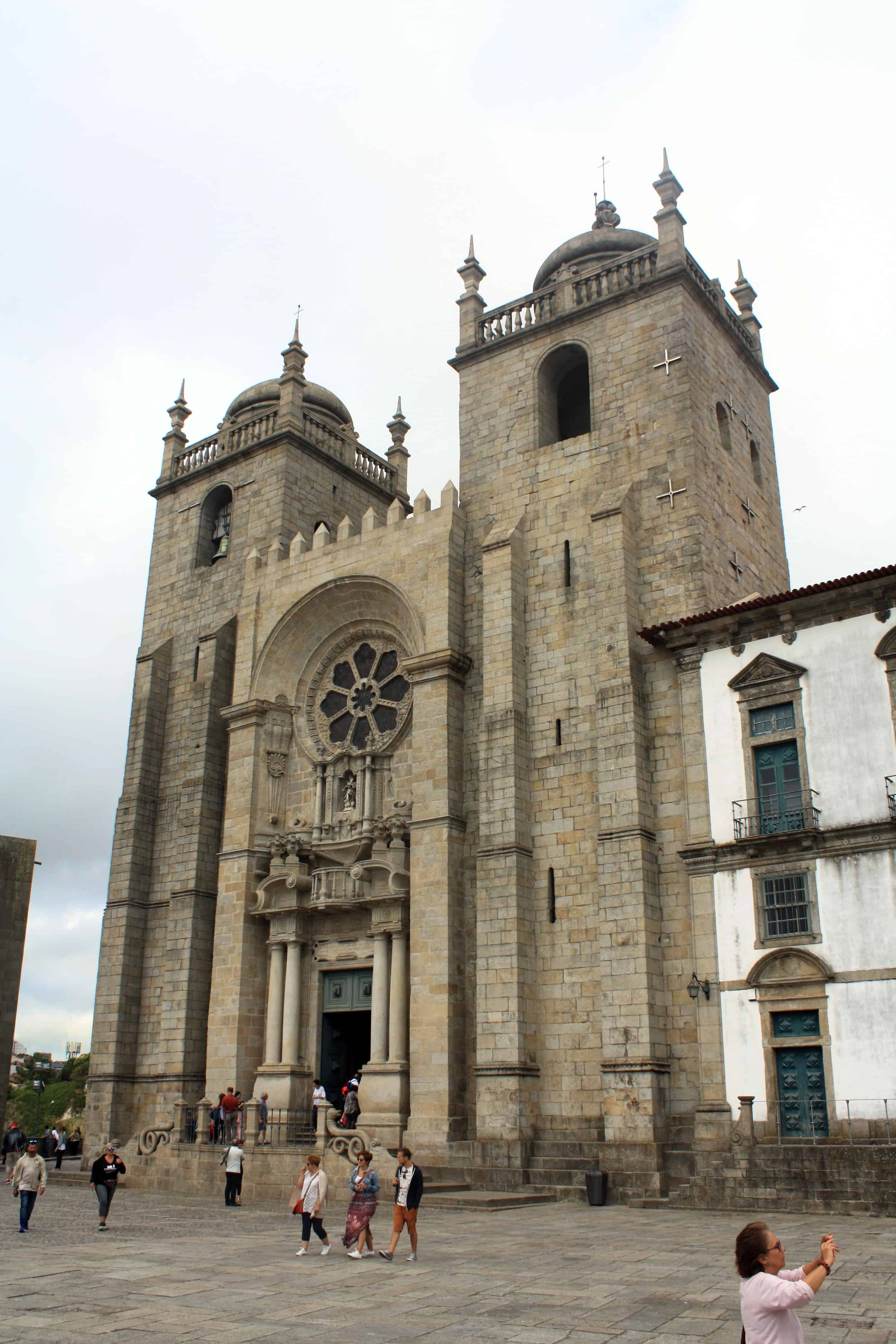 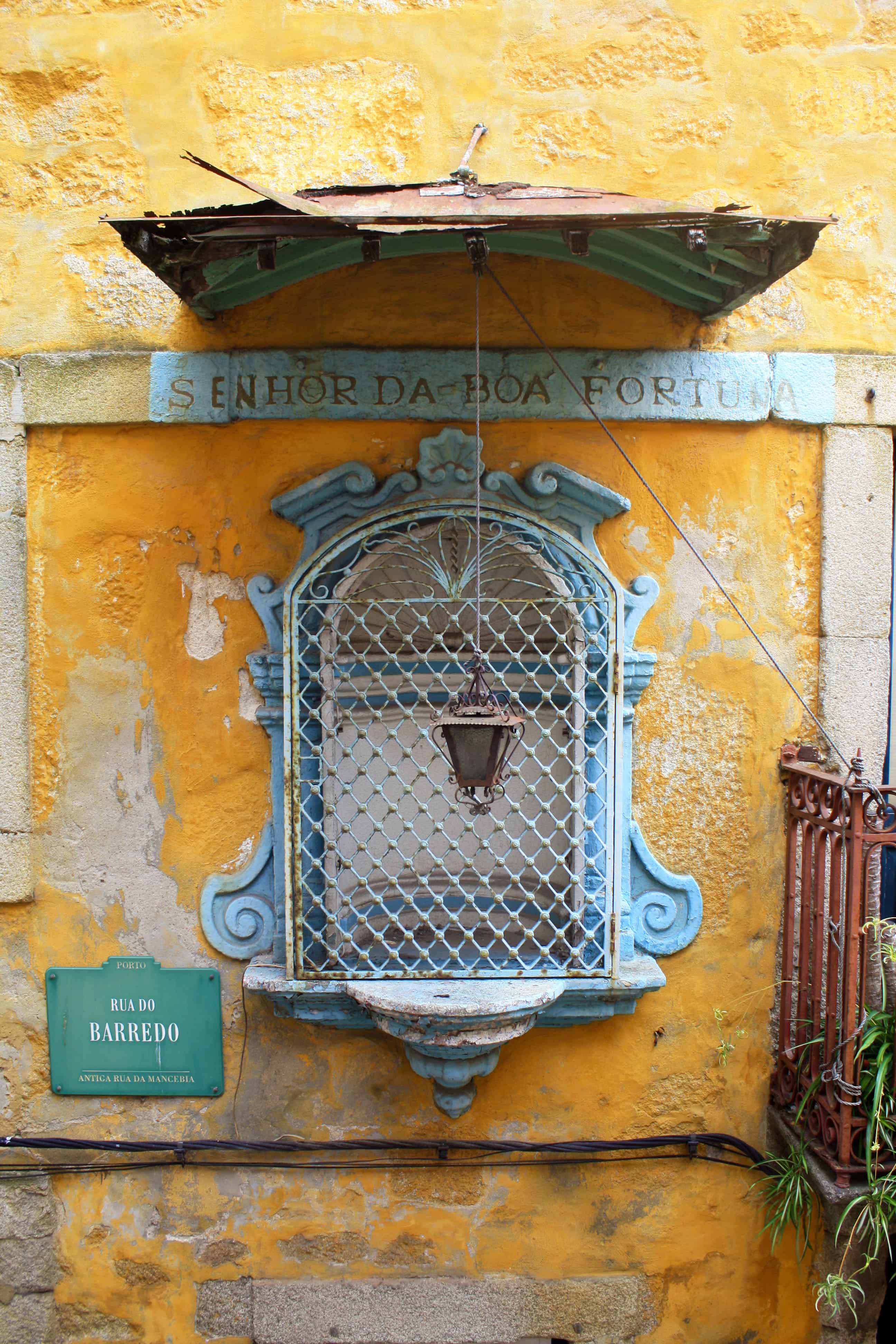 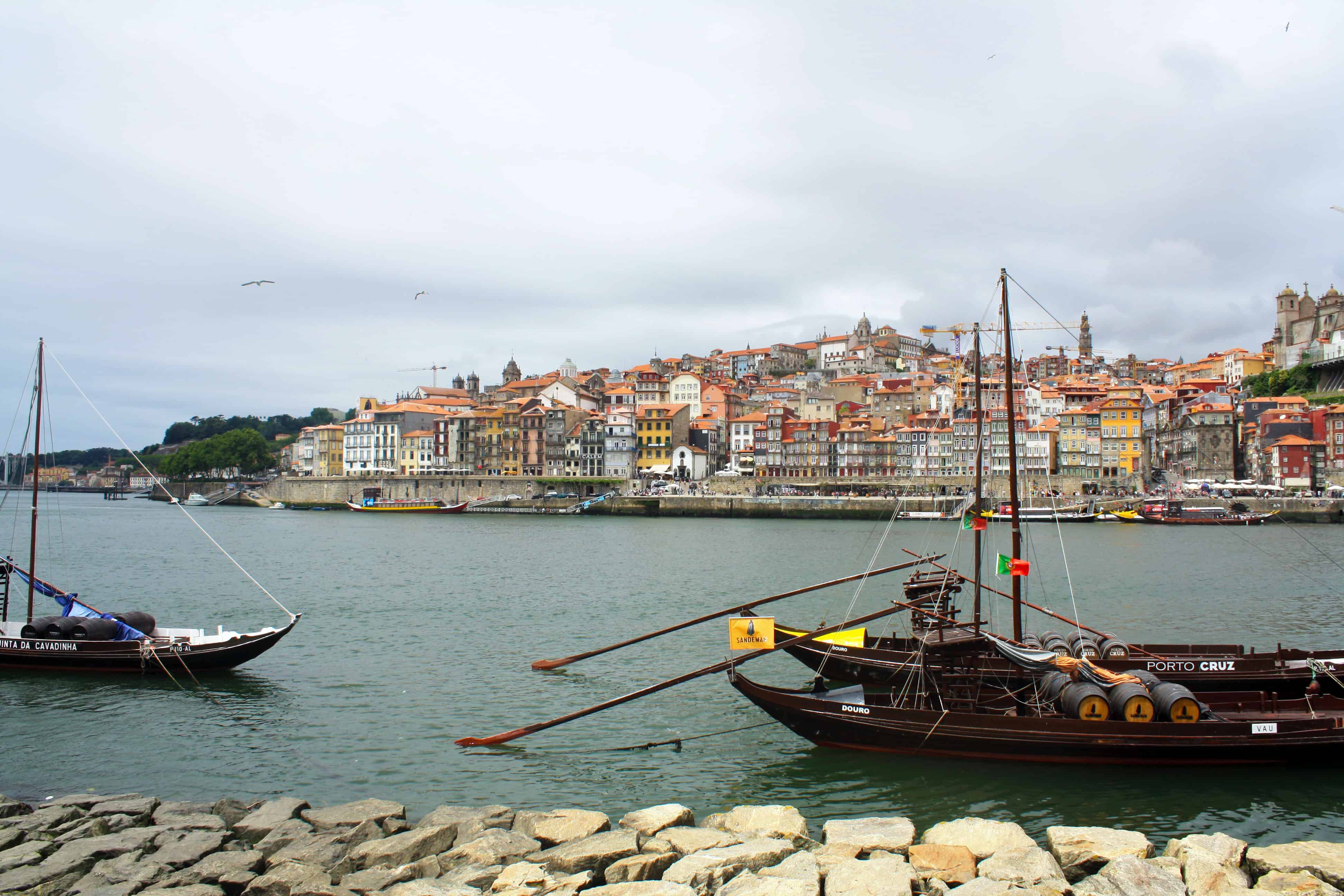 4. Cross the Dom Luís I Bridge

This landmark is unmissable. The emblematic Ponte Dom Luís I is what most people think about when they picture Porto (apart from Port wine, obviously).

The characteristic iron arch of this elegant two-level metal bridge can be seen from everywhere along the Ribeira, crossing over the Douro River to connect Porto and Vila Nova de Gaia. Built in the 19th century by Teófilo Seyrig, a disciple of Gustave Eiffel, it is yet another example of metal constructions in Portugal (the Elevador de Santa Justa featured in our Lisbon Travel Guide was made by another of Eiffel’s apprentices!).

It’s quite a peculiar piece of engineering as it has two levels running along its 172 metres (564 ft). With pedestrian lanes on both levels, the top is designated to railway circulation whilst the bottom is dedicated to vehicles. Don’t miss the opportunity to stand in the middle of the bridge, where you will be able to enjoy incredible views of the the wine boats floating on the Douro River, with Ribeira and Miragaia on one side and Vila Nova de Gaia on the other. 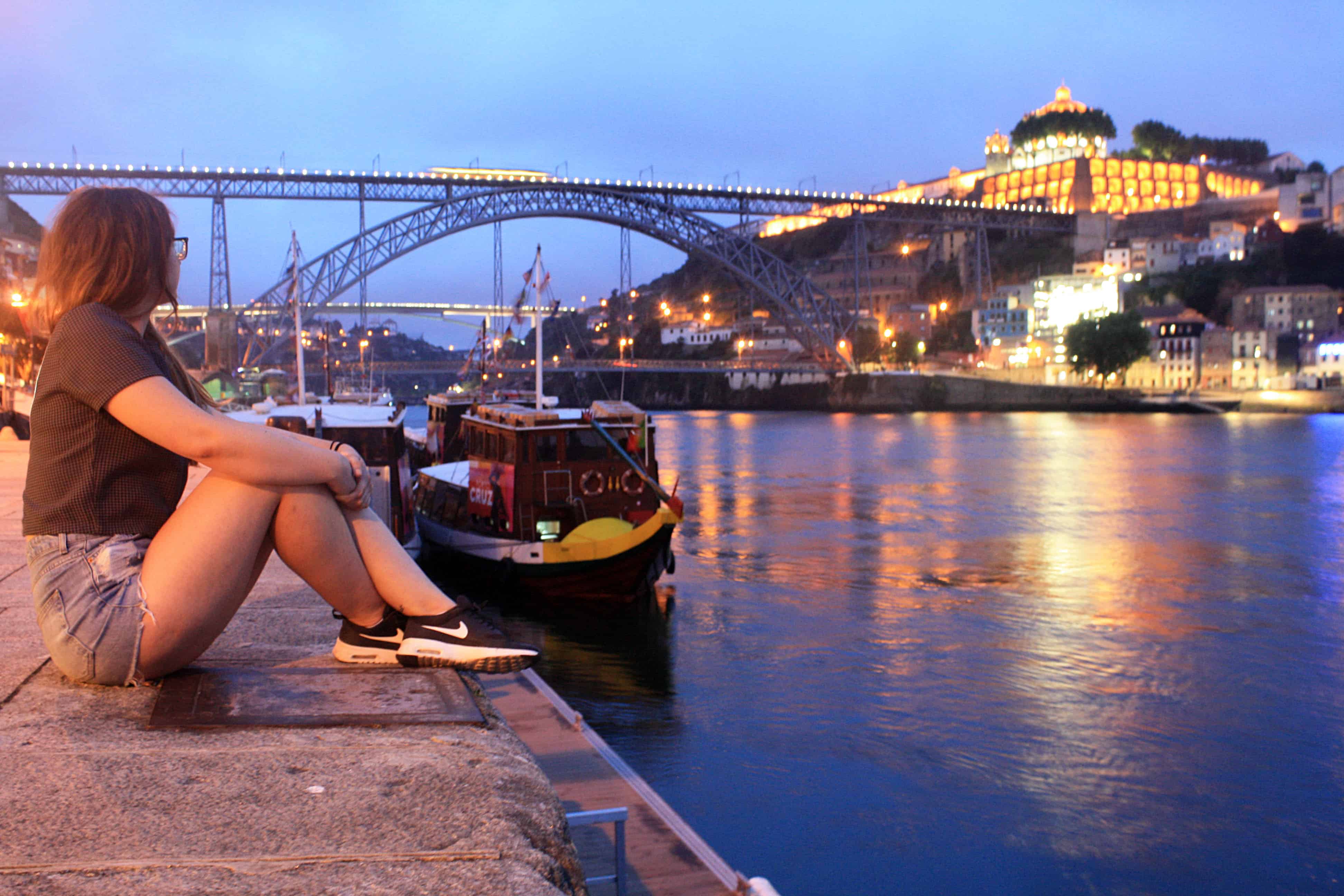 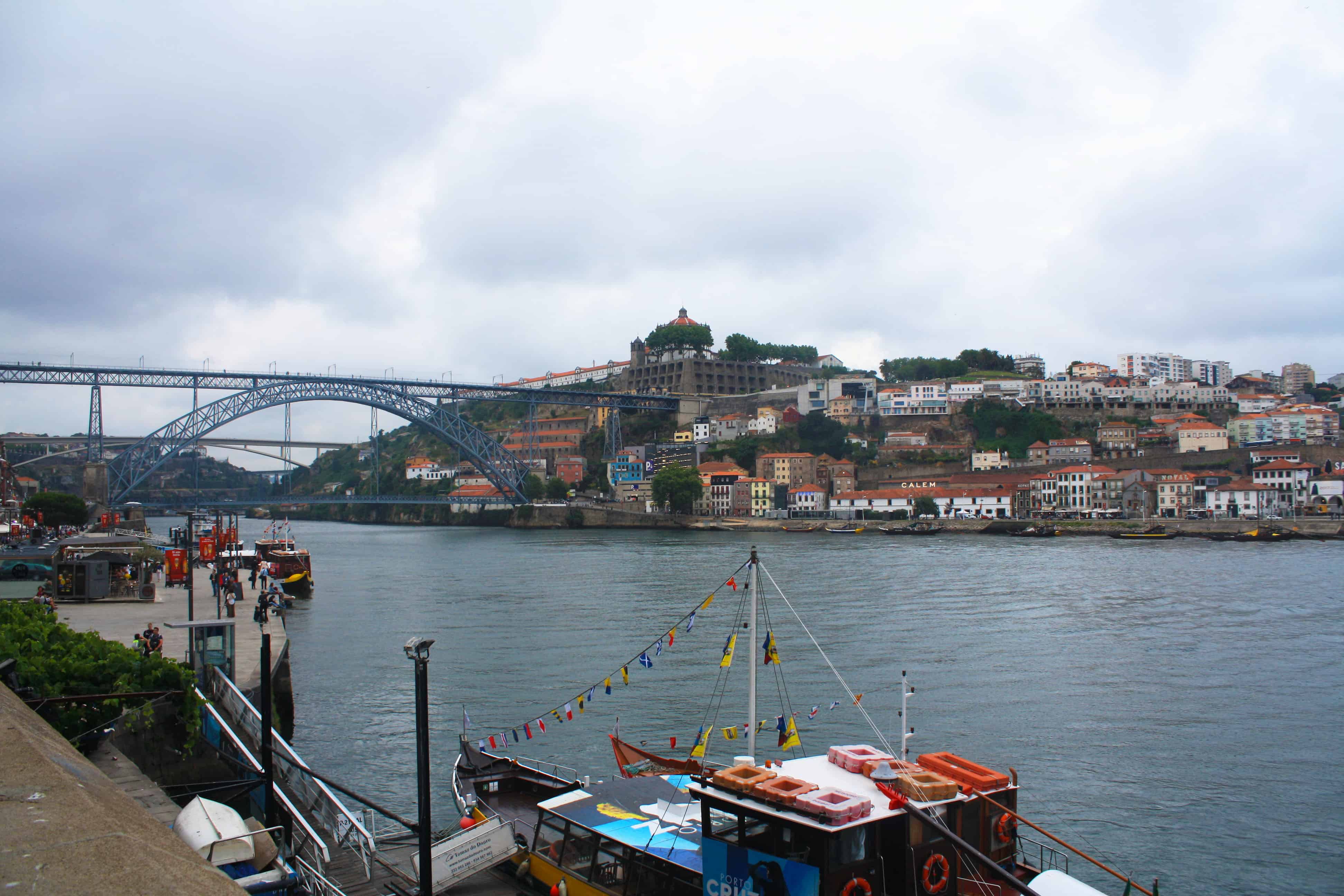 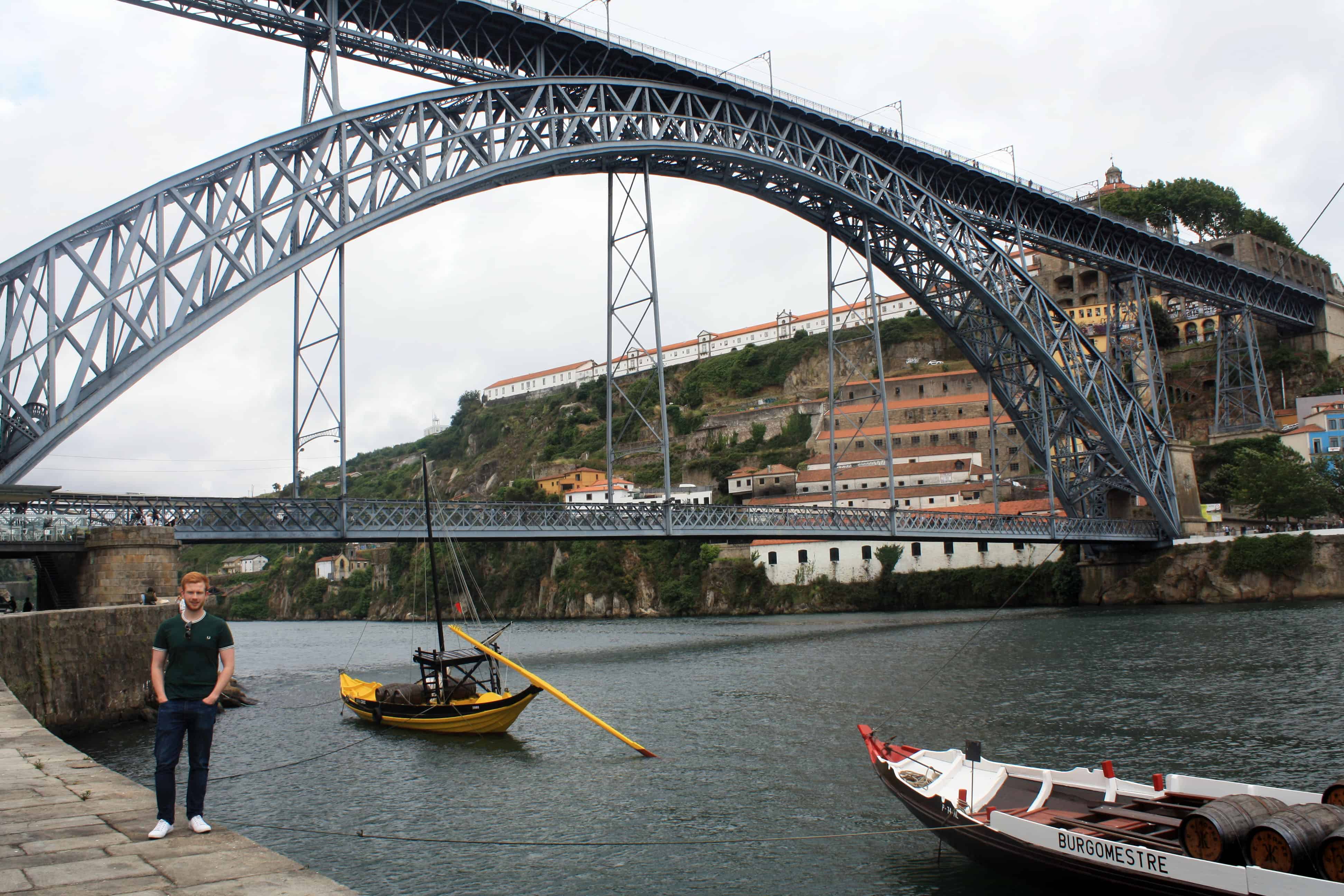 Now, I am a fan of wine tasting (and my Madeira Travel Guide is a great example of it) so of course I couldn’t miss the opportunity to try the very best of Port Wine in Porto! We picked the House of Sandeman for our tasting tour, but you can pick one (or two, or three) of the many renowned wine cellars in Vila Nova de Gaia.

Sandeman offers a classic tour for just 12.00€, where guides dressed as the Sandeman Don will guide you through the cellars and explain everything you need to know about Port Wine and its peculiar ageing process in hundreds of wooden vats and barrels. The best part is saved for the end – tastings of Ruby and Tawny Porto Wines! Absolutely recommended. 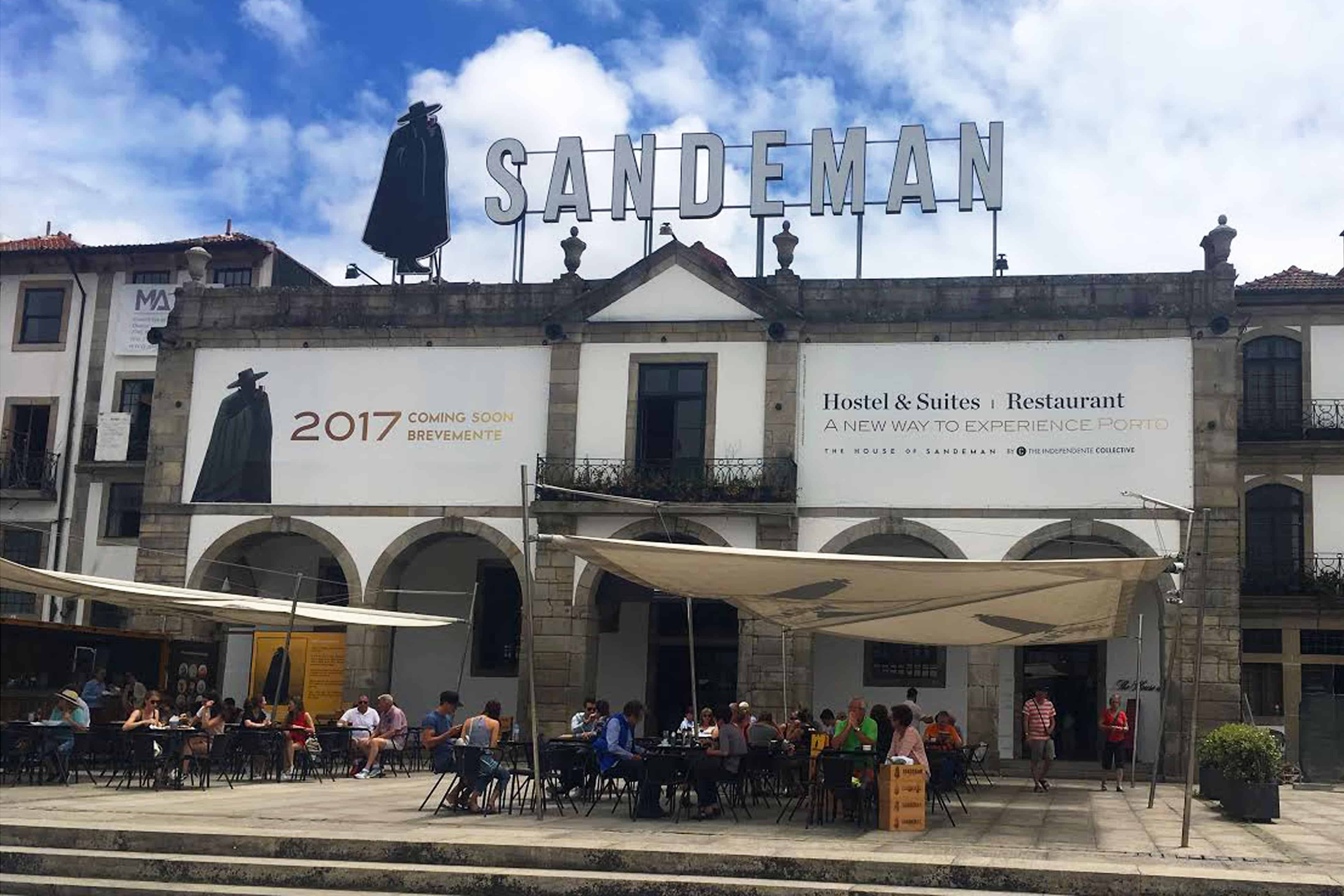 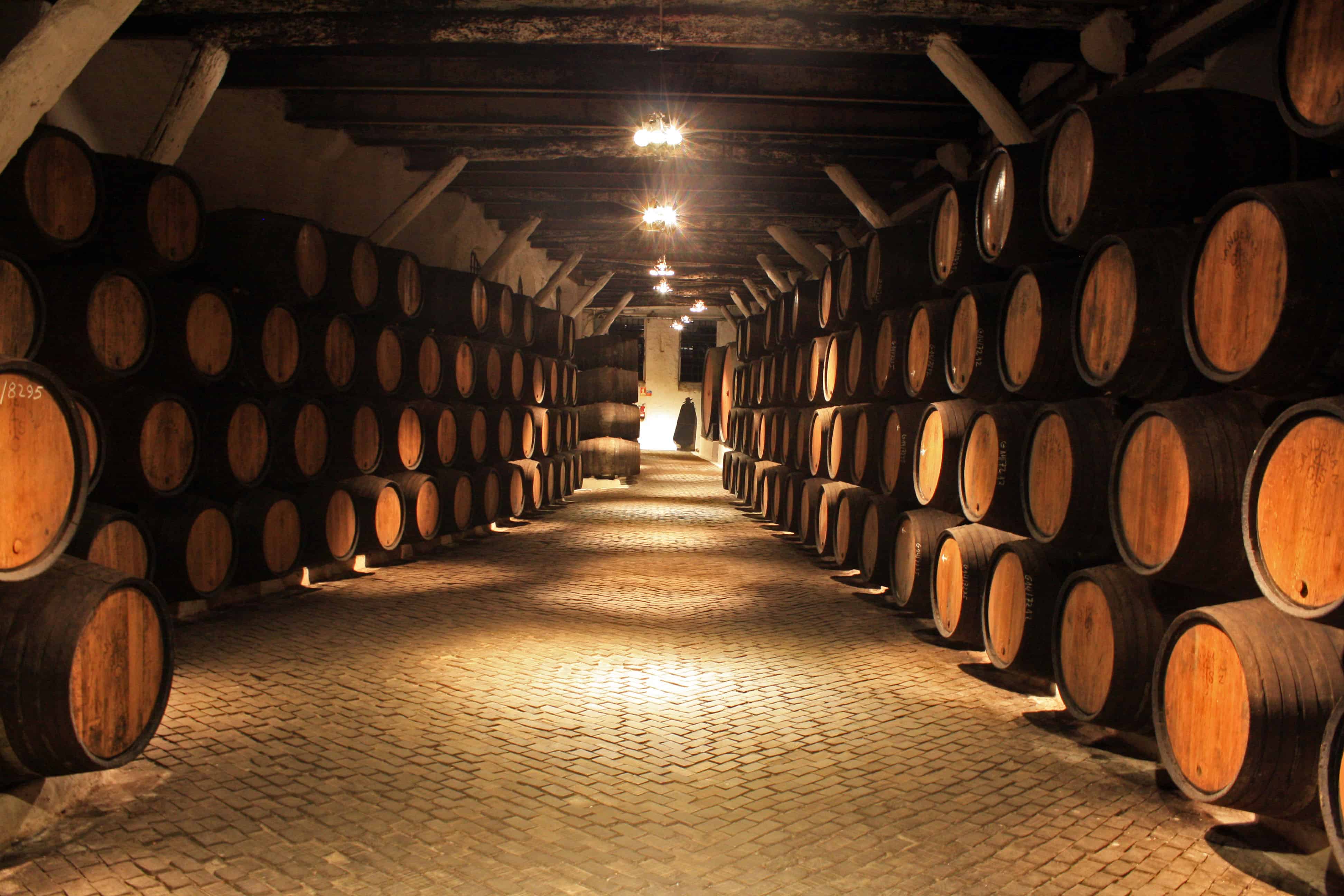 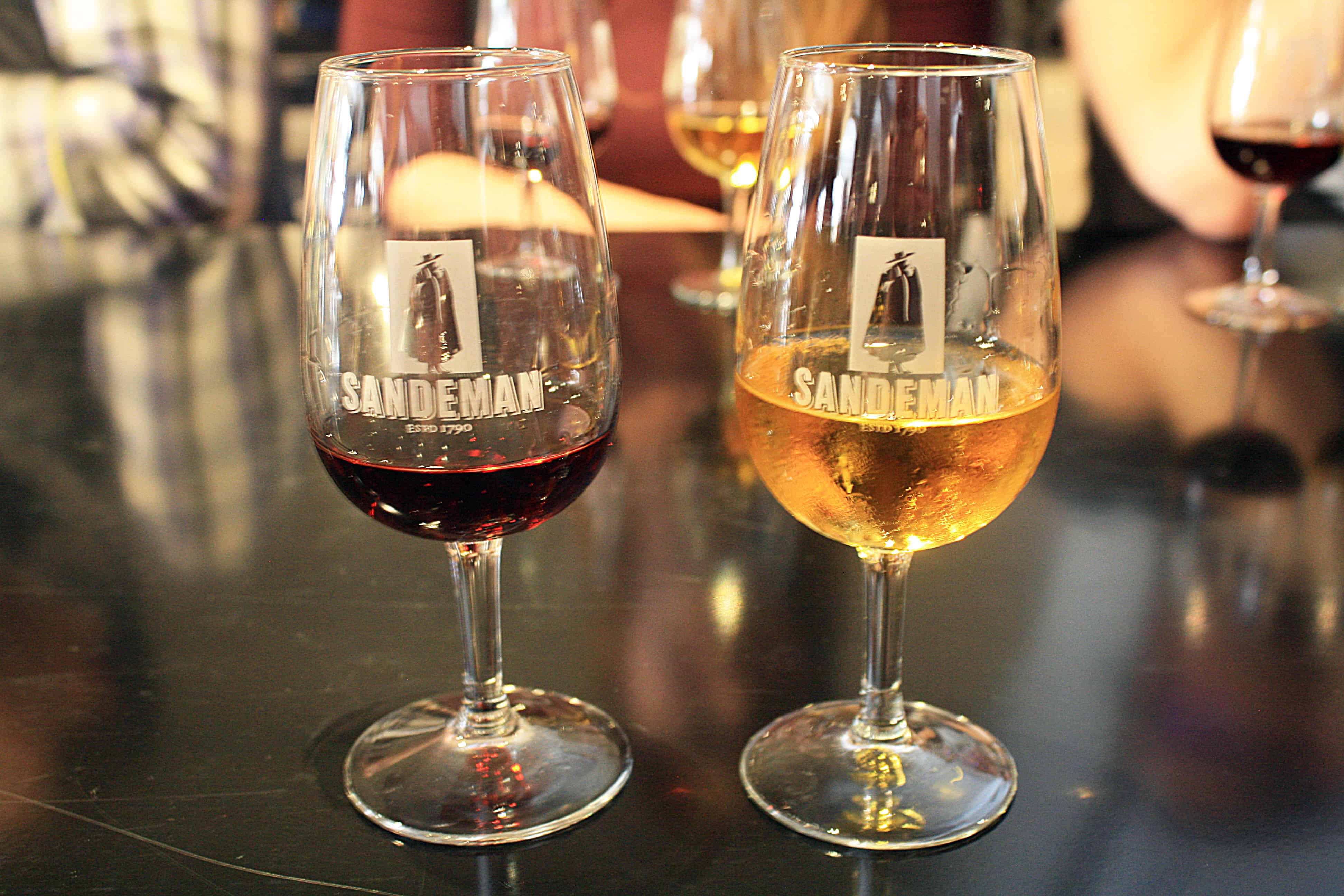 6. Wander around the Jardins do Palácio de Cristal

These 19th century public Victorian gardens are located on one of Porto’s hills, overlooking the Douro River. They were initially built to surround the Pavilion hosting the International Exhibition of Porto and several other fairs afterwards. Designed by English architect Thomas Dillen Jones and inspired by London’s iconic Crystal Palace, the initial Palacio do Crystal is no longer there and has been replaced by the UFO-like Rosa Mota Pavilion.

Part of the spectacular forest-like gardens and terraces, however, are still there and can be visited daily, free of charge. Filled with fountains, a variety of birds, trees and flower mosaics from all over the world, it’s just the perfect place for a leisurely walk surrounded by the very best of nature. 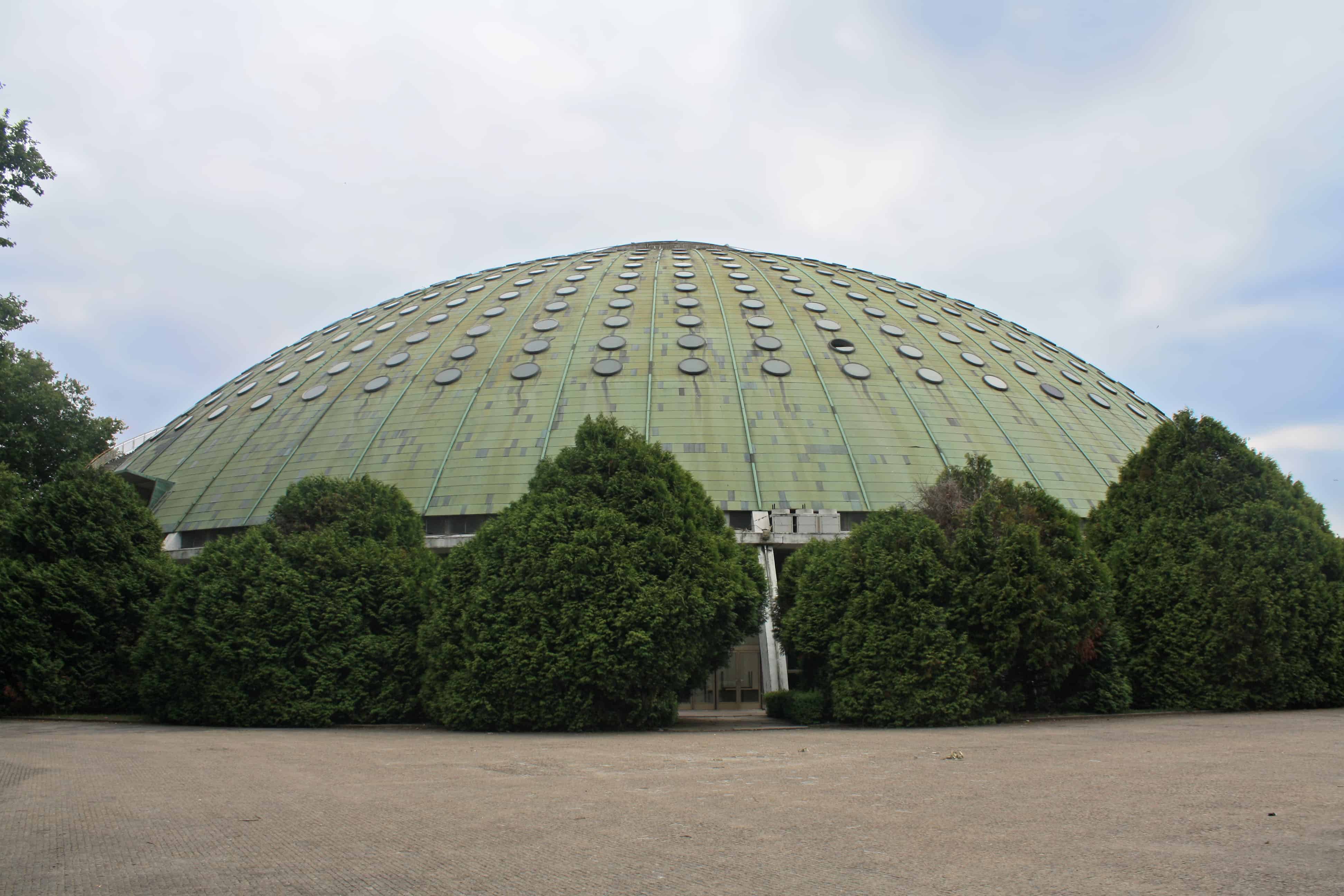 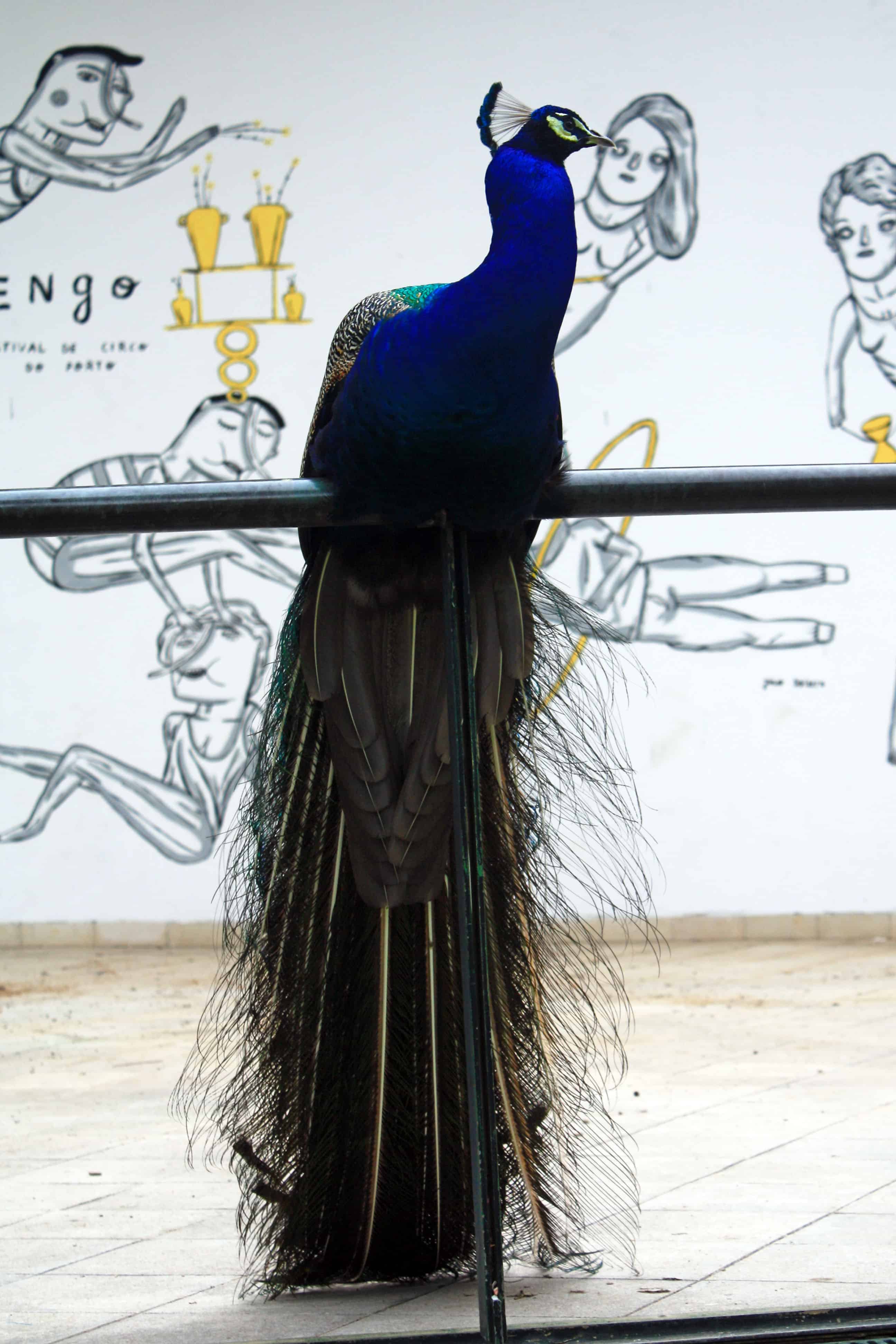 Avenida dos Aliados is one of Porto’s main avenues and the heart of the city centre. Running between Mercado do Bolhão and São Bento Railway Station, it leads to Praça da Liberdade, Porto’s most important square featuring a statue of King Pedro IV atop a horse. Magnificent modernist buildings can be seen on both sides of the avenue, such as Porto’s Town Hall and the most beautiful McDonald’s in the world. With a spectacular eagle over its entrance, the interior is filled with Art Deco stained glass panels, mirrors and crystal chandeliers, original features of the former Imperial Café that was once there.

Located close to Avenida dos Aliados, this 19th century emblematic market has it all: fresh fruit, vegetables, meat and fish, flowers and a variety of handmade/traditional Portuguese products. Farmers sell their produce in stalls arranged around a central courtyard of the two-level market, a tradition that’s been alive since its establishment back in 1839.

Unfortunately, Bolhão Market is currently under restoration and will be closed during the next two years (until 2020). Nevertheless, we recommend paying a visit to Confeitaria do Bolhão, a bakery/restaurant right next to the market that’s over 100 years-old and where you’ll be able to get the most delicious savory and sweet pastries and cakes. Delicious!

9.  Marvel at the magical Livraria Lello

Livraria Lello is one of the most outstandingly beautiful bookshops in the world. This historic building was designed by engineer Francisco Xavier Esteves and opened by brothers José and António Lello in 1906. With a stunning Neo-Gothic décor, the two-storey bookshop features an imposing stained glass ceiling, wood-carved banisters, a magnificent red wooden staircase and even a small café upstairs! The wooden shelves on the walls, chock-full of a large variety of books, are carved with Portuguese literary figures. New and old books in both Portuguese and English, valuable first and collector editions, books from every genre imaginable…it’s all here!

Its incredible interior is rumoured to have been an inspiration to J.K. Rowling for the Harry Potter books, as she used to frequent the store whilst teaching English in Porto. You do need to pay a 3€ entry fee to access the bookshop; however, this price is discounted if you purchase a book. 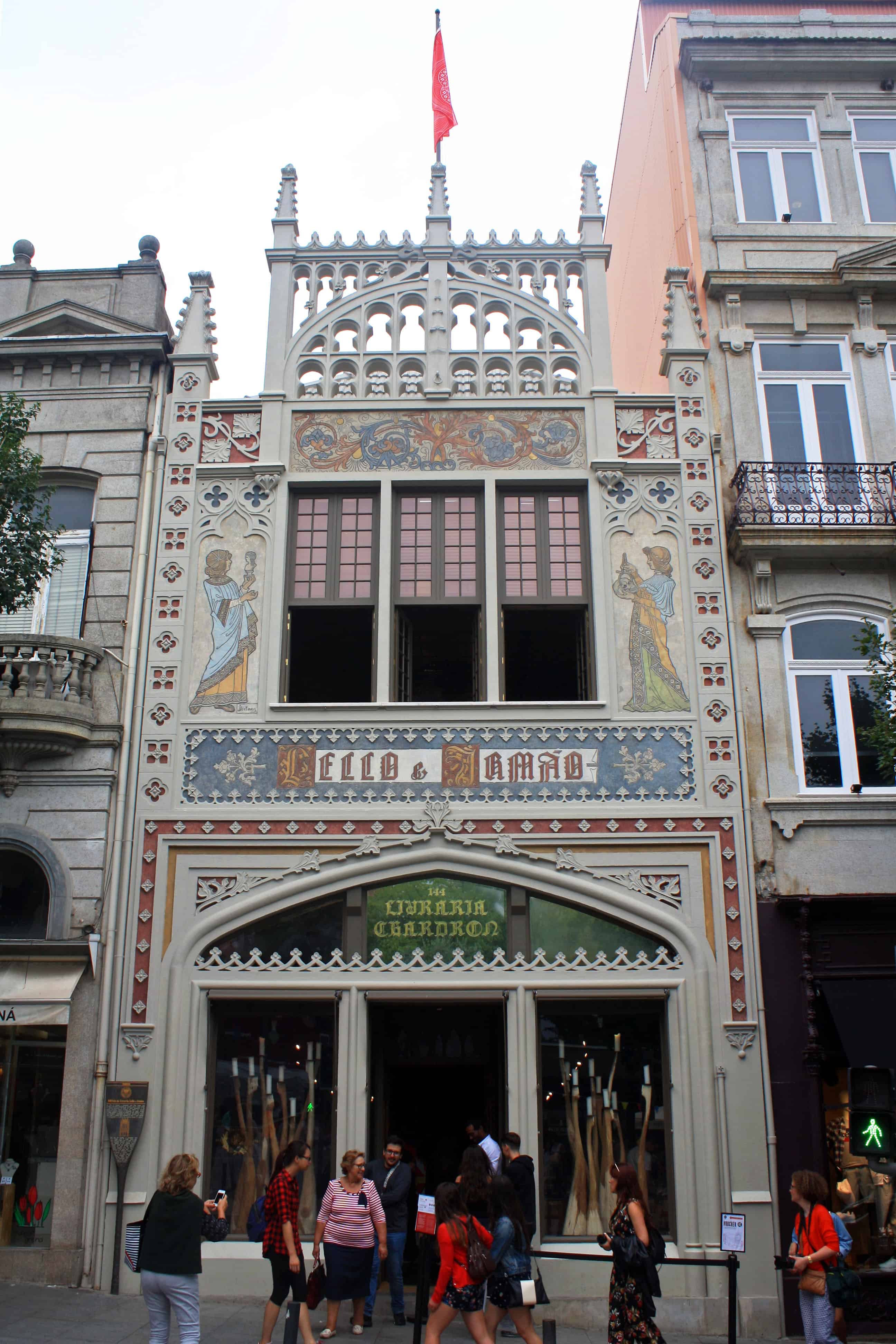 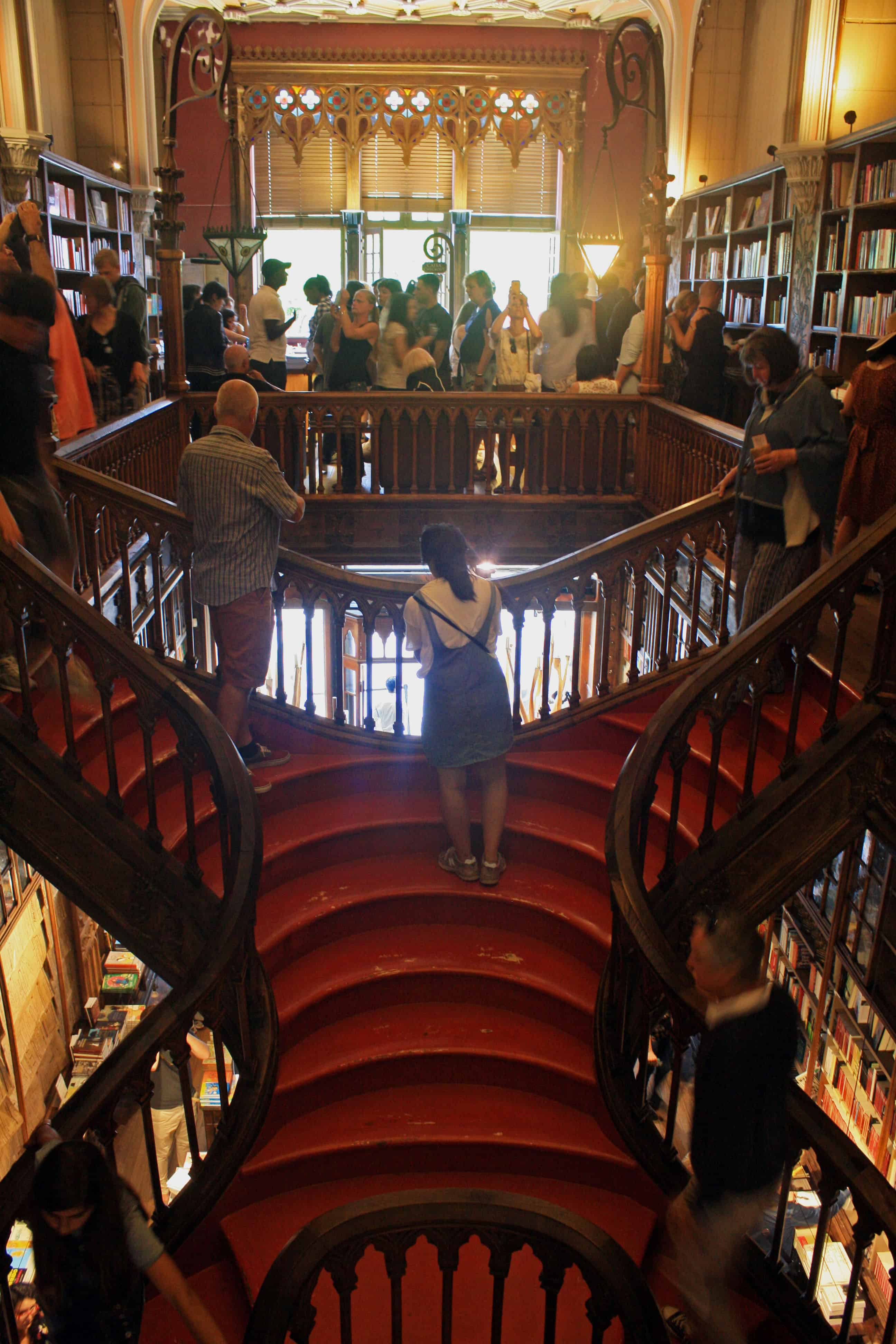 Francesinha (literally, Little French woman) is a sandwich made with bread, steak or roast beef, wet-cured ham, linguiça (a portuguese sausage) and covered in melted cheese and a hot tomato and beer sauce (and sometimes fried egg). It was inspired by the Portuguese immigrants’ adaptation of the French Croque Monsieur, obviously taken to a whole new level. It’s a calorie bomb, so make sure you can handle it! Sam and I actually shared one.

Other things to do in Porto

Have you ever been to Porto? If so, what’s your favourite thing about it? If you really loved our post please leave us a comment and show us some love on social media using the buttons below

Essential things you must see in Bruges | TRAVEL GUIDE