When it comes to travel, one of my favourite things is familiarising myself with the trendiest spots, cultural musts and most exciting places to eat in whatever our next destination is. As someone who is constantly on the lookout for new places to add to my little travel book, I cannot bear lazying around and absolutely have to visit as many different spots as humanly possible. A control freak, I know.

There aren’t many cities that I fall head over heels for at first sight, but I have to admit Edinburgh won me over from the very beginning. Having never been to Scotland before, I was really excited to see bagpipers in person – something that had been on my travel bucket list for quite a while! Thankfully, they were far better than Ross’ bagpipe performance in Friends! That being said, how could I possibly not include a bunch of recommendations to make your time in the Scottish capital far more enjoyable? Shall we go ahead with my best things to do in Edinburgh? 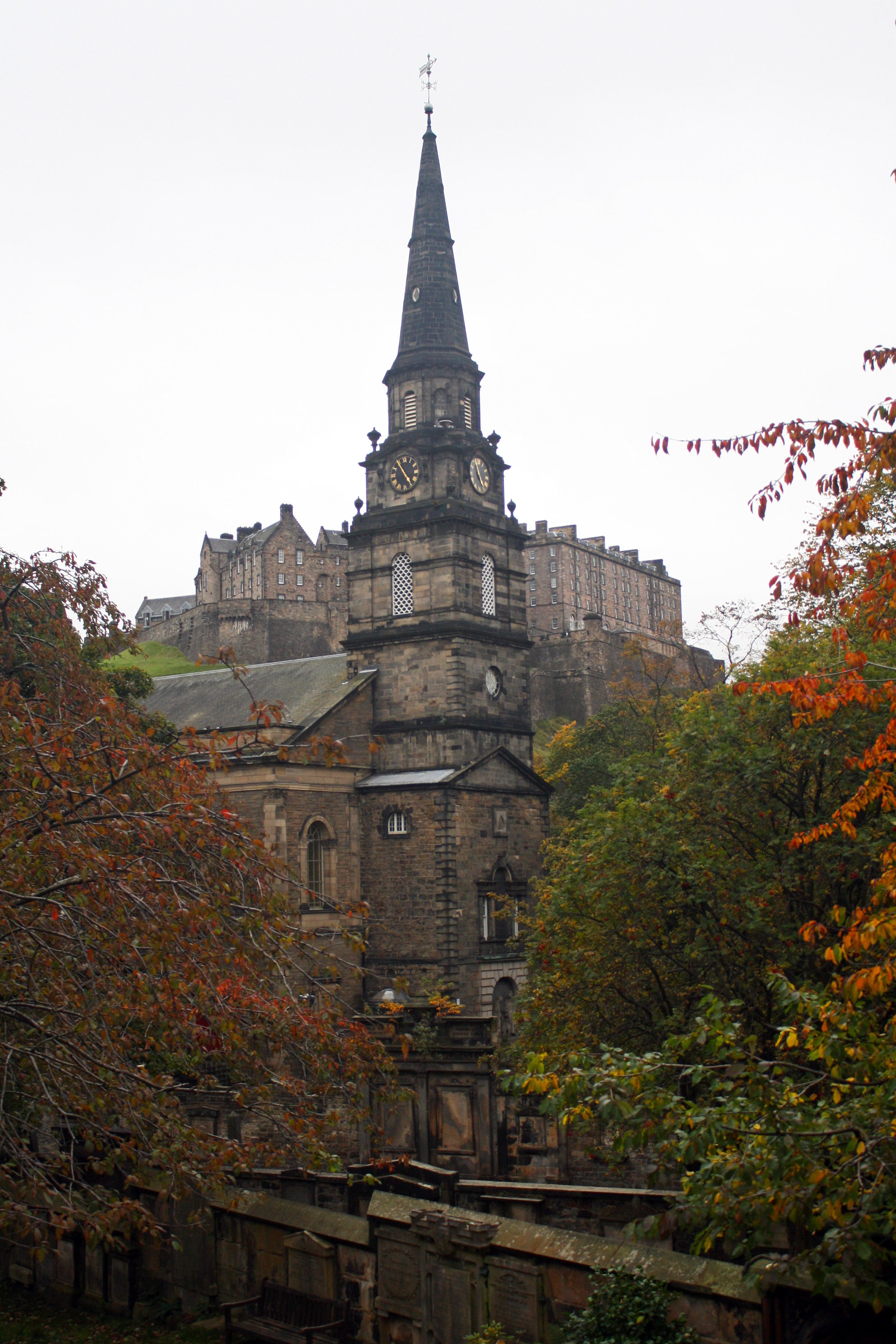 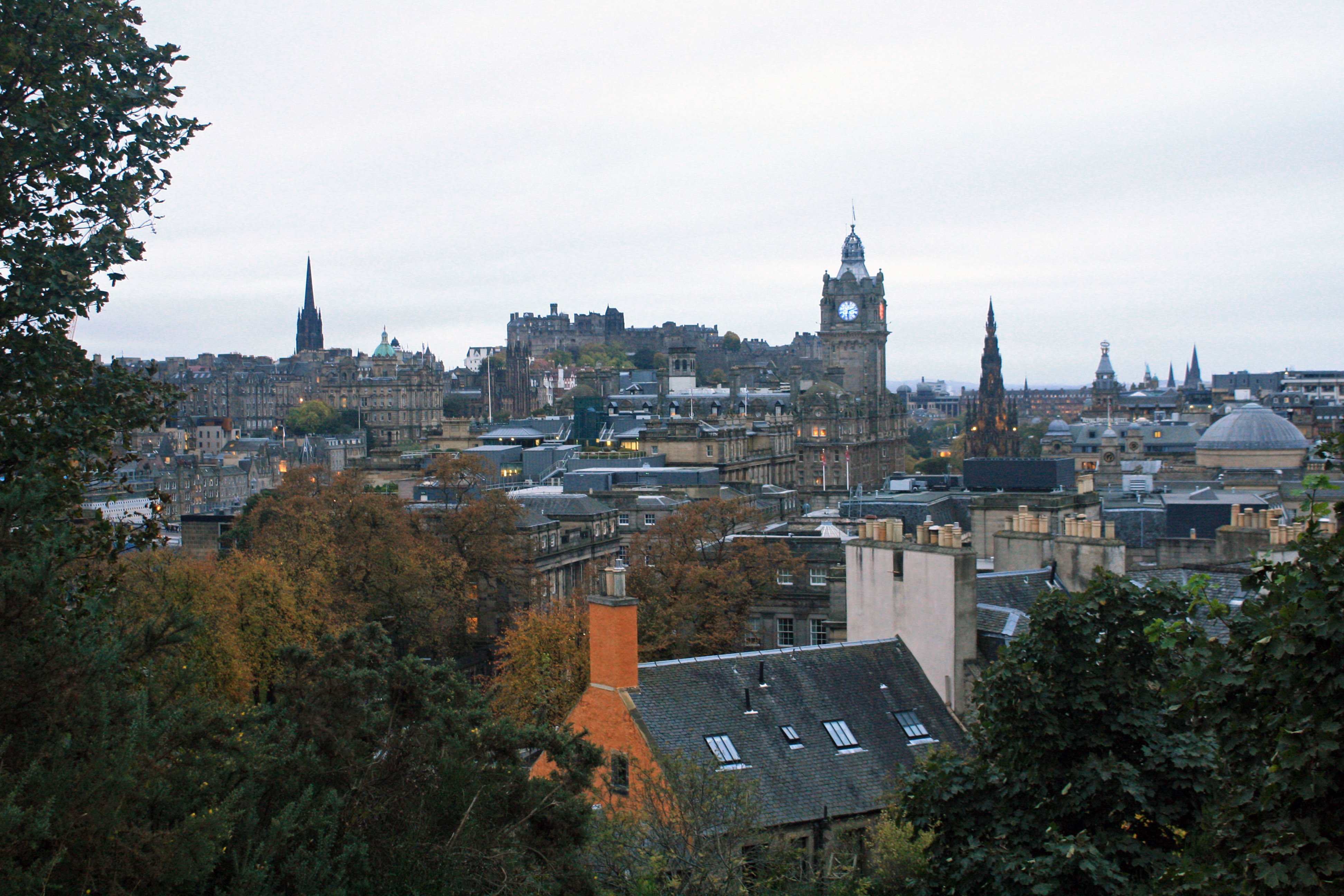 Sitting imposingly on of top Castle Hill, in Edinburgh’s Old Town, Edinburgh Castle can be seen from every point in the city. Likewise, its strategic location offers the most amazing views over the Scottish capital and surrounding green hills and blue sea. Surrounded by sheer cliffs, this volcanic stone castle can only be accessed from a steep ascent at one end of the Royal Mile. 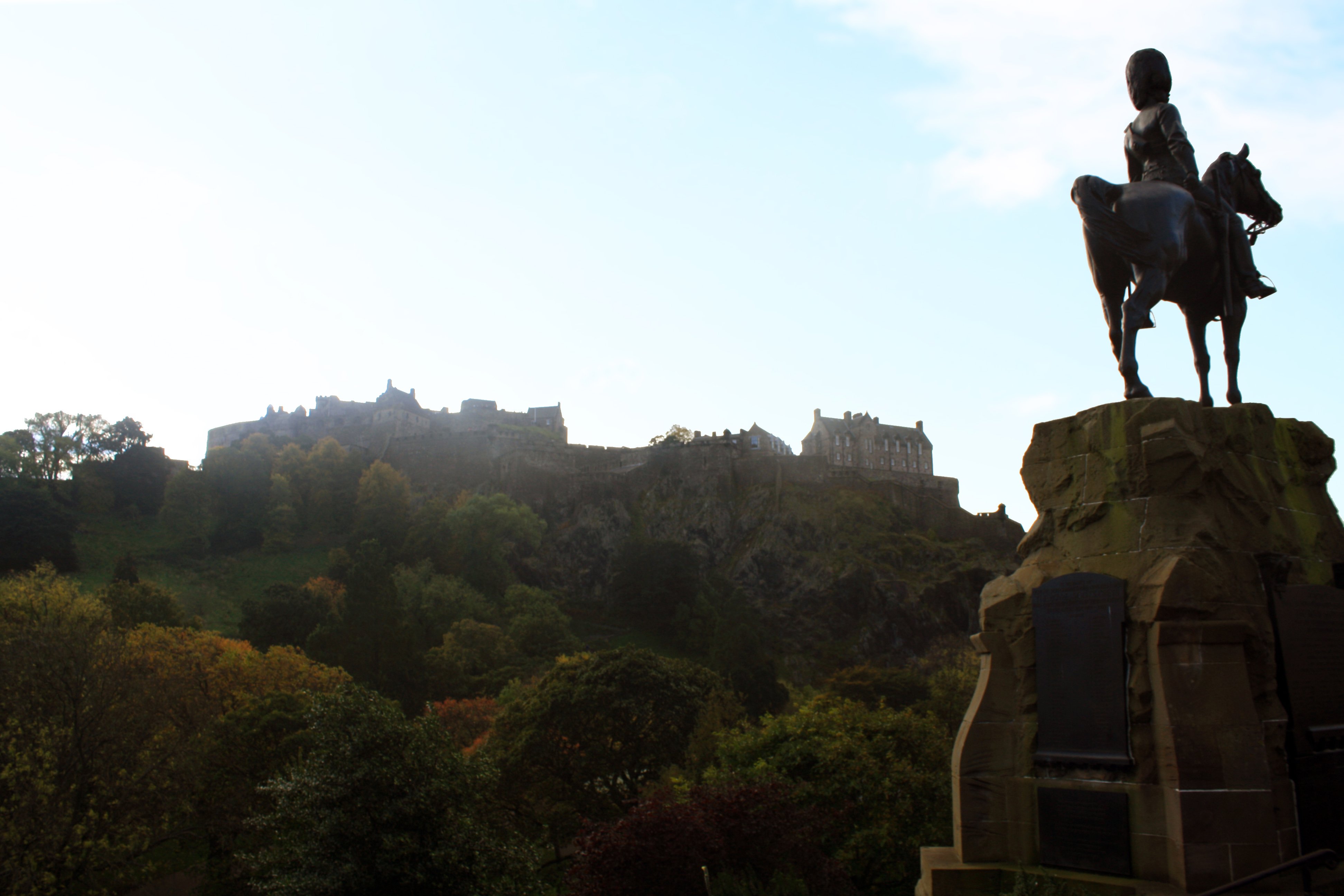 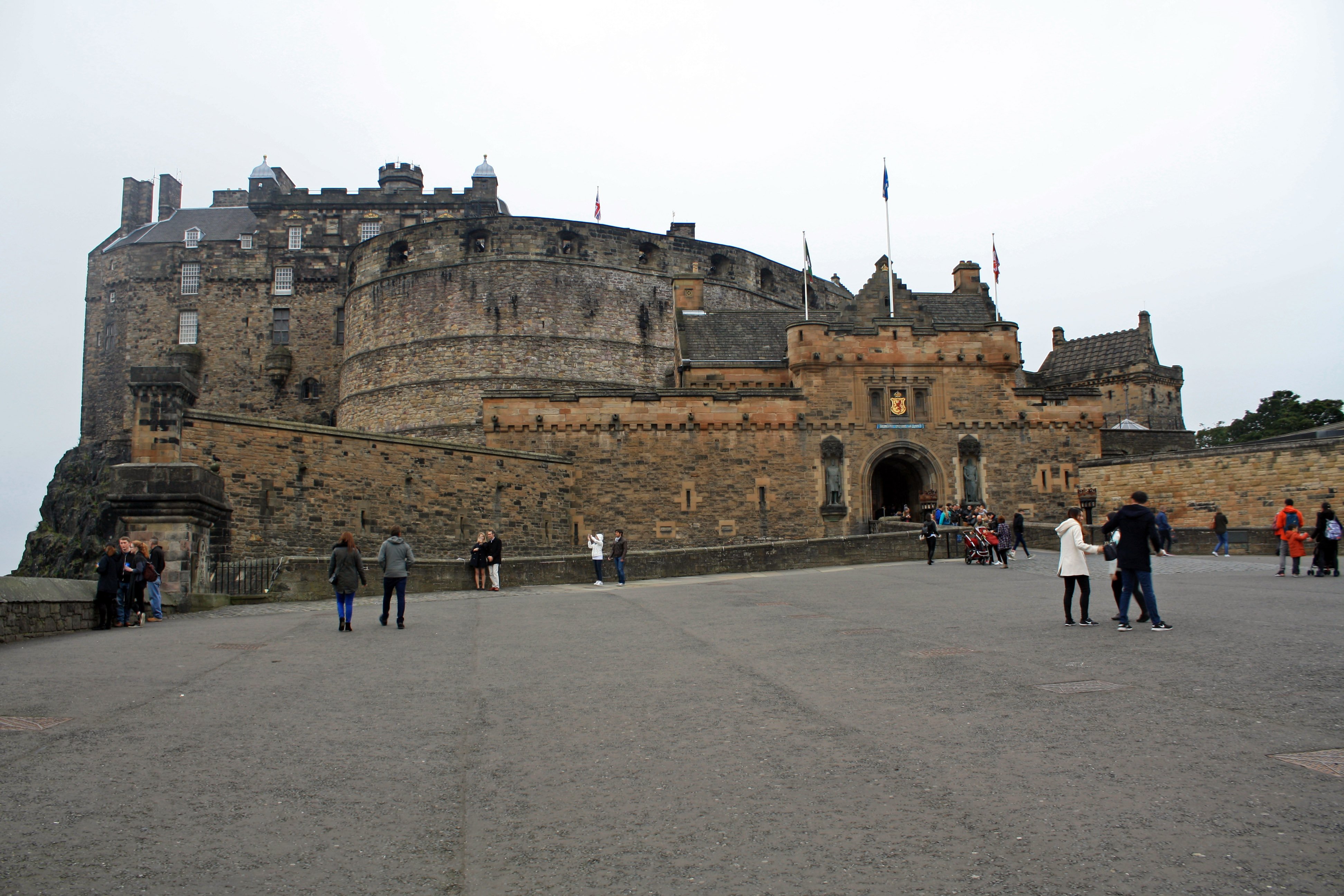 With human settlements on the hill dating back to the Iron Age, the castle was initially erected as a military fort to protect the Scottish territory from foreign invasions, as well as controlling new arrivals to the port. Back in the 12th century, King David I of Scotland converted the castle into the official royal residence of Scottish monarchs. Now, this magnificent building welcomes more than a million of visitors from all over the world. Edinburgh Castle and the grounds offer incredible points of interest to be visited. Here are just some of my favourites!

Looking for THE busiest and most famous street in Edinburgh? Then the Royal Mile is your place. This medieval road is actually a succession of streets running through the heart of the capital’s historic centre, connecting the Palace of Holyroodhouse at the foot of Arthur’s Seat, with Castle Hill and Edinburgh Castle. A little nugget of information for you: the Royal Mile is approximately one Scots mile long (1.81km), a measure that was last used in the 18th century! 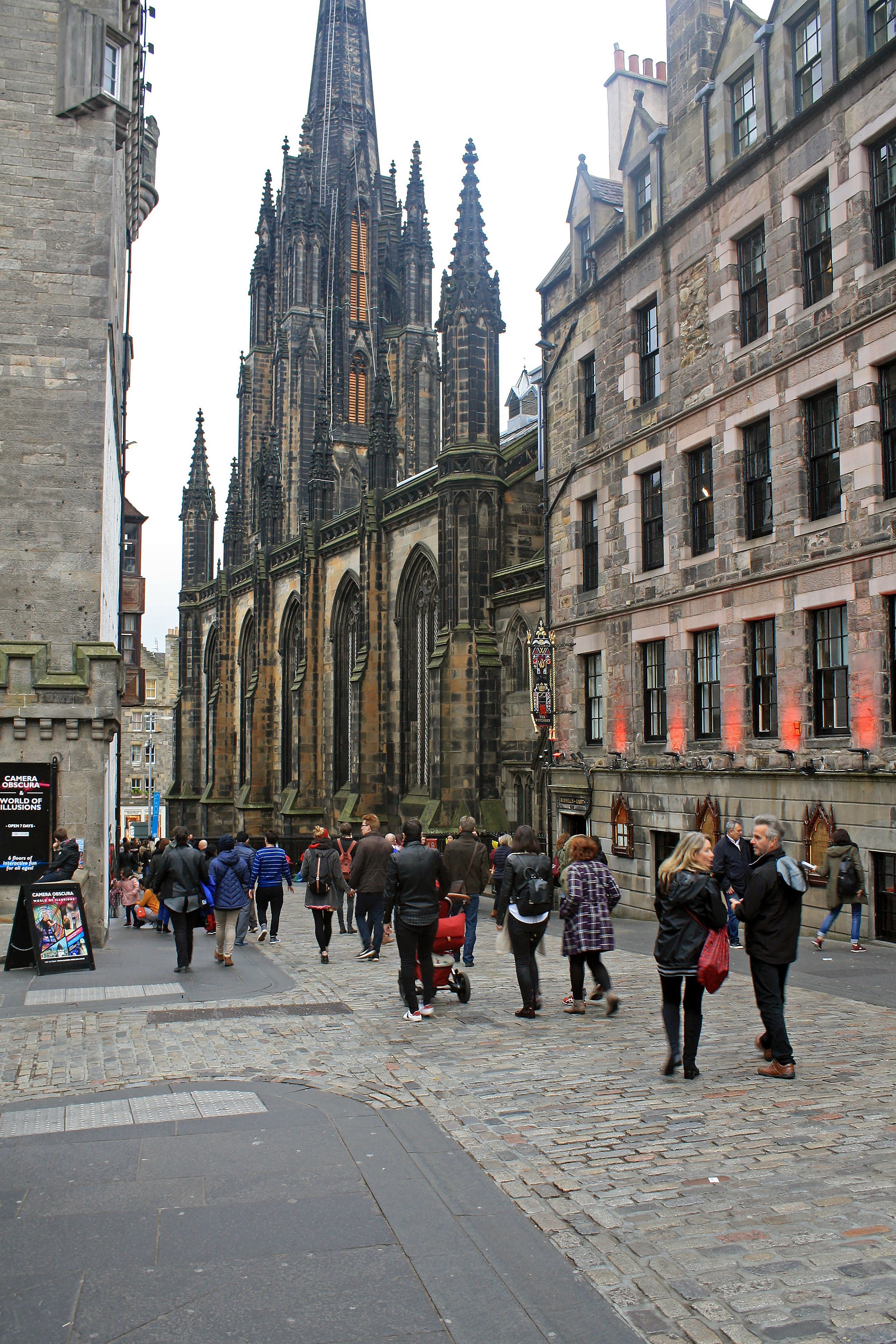 Being the most touristy area of Edinburgh means the Royal Mile is bustling with tourist attractions, cafés, museums, pubs and gift shops. These run from Castle Hill and the Esplanade to the Lawnmarket (the oldest part of the Old Town and once home to a linen market), High Street (and the imposing St Giles Cathedral), Canongate (once an semi-independent burgh within Edinburgh) and all the way to Abbey Strand (where the Scottish Parliament sits). Phew! 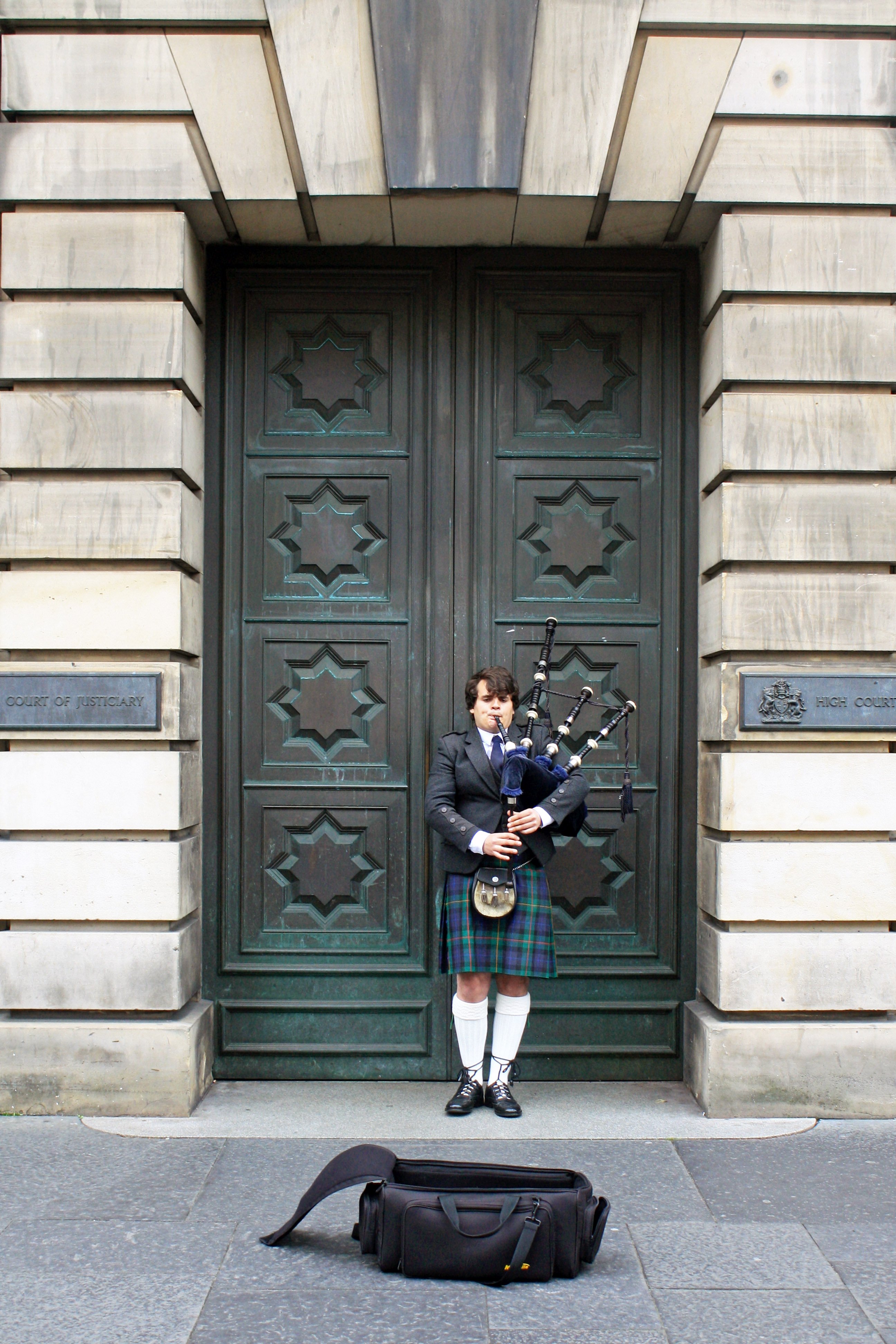 Although street performers and souvenir sellers try to steal your attention, truth is that the Old Town’s main street is much more than that. With narrow alleys extending from the Royal Mile, you’ll soon find yourself exploring a labyrinth of adorable and old-fashioned closes. It quickly becomes a guessing game – will you end up in a cobbled alley, a garden, a courtyard, a staircase or a dead end? Exciting!

St Giles Cathedral or High Kirk of Edinburgh is perhaps one of the most important buildings on High Street. Founded by King David I in 1124, this is the Church of Scotland’s main place of worship according to the Presbyterian tradition! The crown-spired church has undergone numerous reconstructions, with various parts of its structure belonging to different periods in time.

With an outstanding interior, it features long stained glass windows and a spectacular stone vaulted ceiling of the recently reopened Thistle Chapel. Considered one of Scotland’s most valuable architectural structures, the Thistle Chapel serves as the private chapel for the Order of the Thistle – the greatest and most ancient order of chivalry in Scotland, where each member is personally appointed by the British monarch. 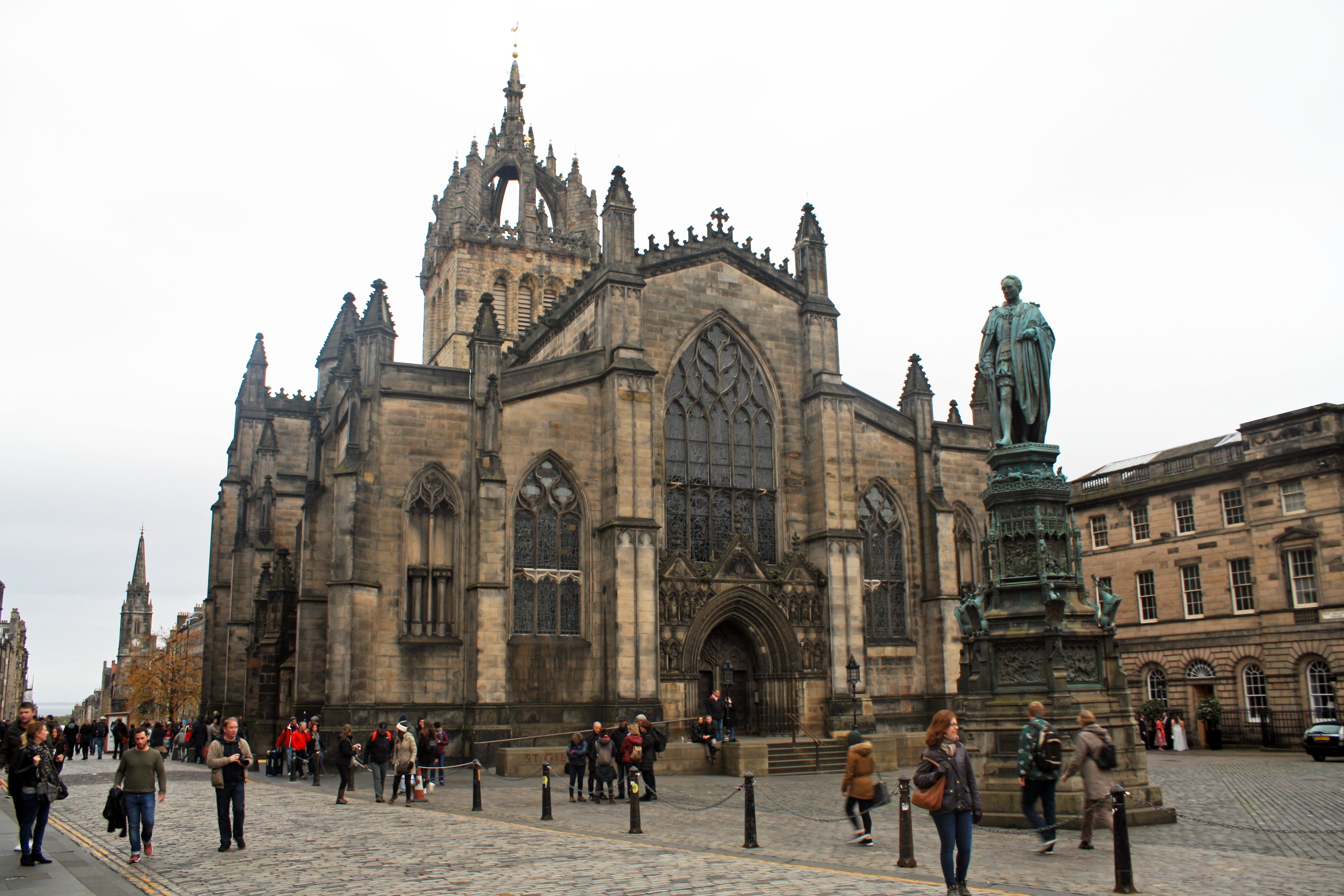 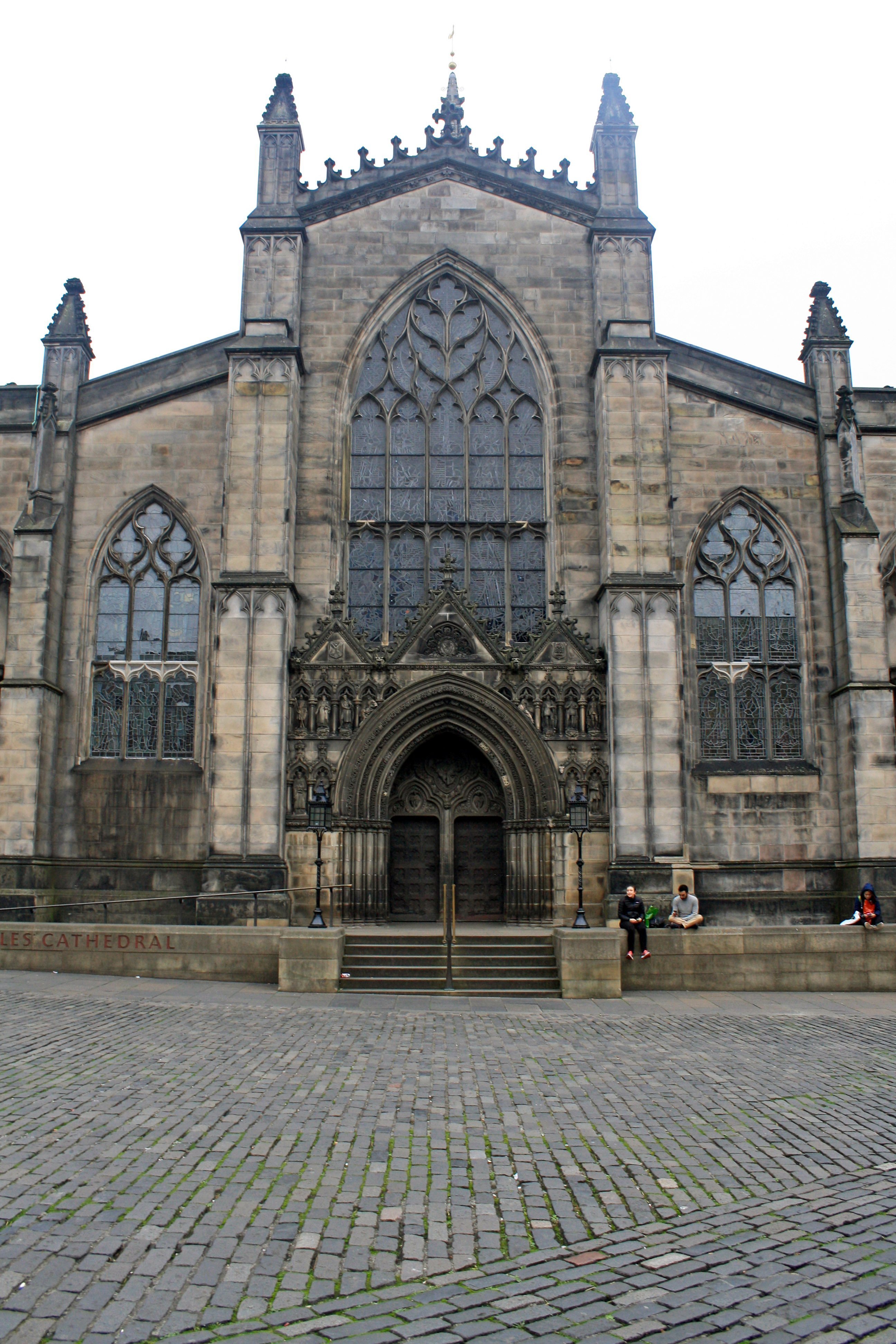 Right by St Giles Cathedral is the Heart of Midlothian. This heart-shaped mosaic often gets the attention of passersby who stop and spit on it, a habit that’s said to bring good luck. This “tradition” dates back to medieval times, when the Old Tolbooth prison sat opposite St Giles Cathedral. It’s said to have been quite a scary building, where prisoners were hung in front of an audience (who would await anxiously and spit on the floor). Their heads were then later displayed on the prison’s façade.

If you’re looking for the best panoramic views of Edinburgh, then Arthur’s Seat should definitely be on your list. Rising like a giant to the east of Edinburgh’s city centre, Arthur’s Seat is the largest peak of the Arthur’s Seat Volcano site, which includes Calton Hill and the Castle Hill which Edinburgh Castle sits on.

Formed by a now extinct volcano which erupted 335-341 million years ago, Arthur’s Seat takes up most of Holyrood Park near the Palace of Holyroodhouse. Its peak reaches 251 metres (822 ft) and, although smaller than Ben Nevis’ 1,345m  (4,413 ft) in the Scottish Highlands, it can be seen from almost anywhere in Edinburgh which, in return, rewards you with captivating views of the Scottish capital. 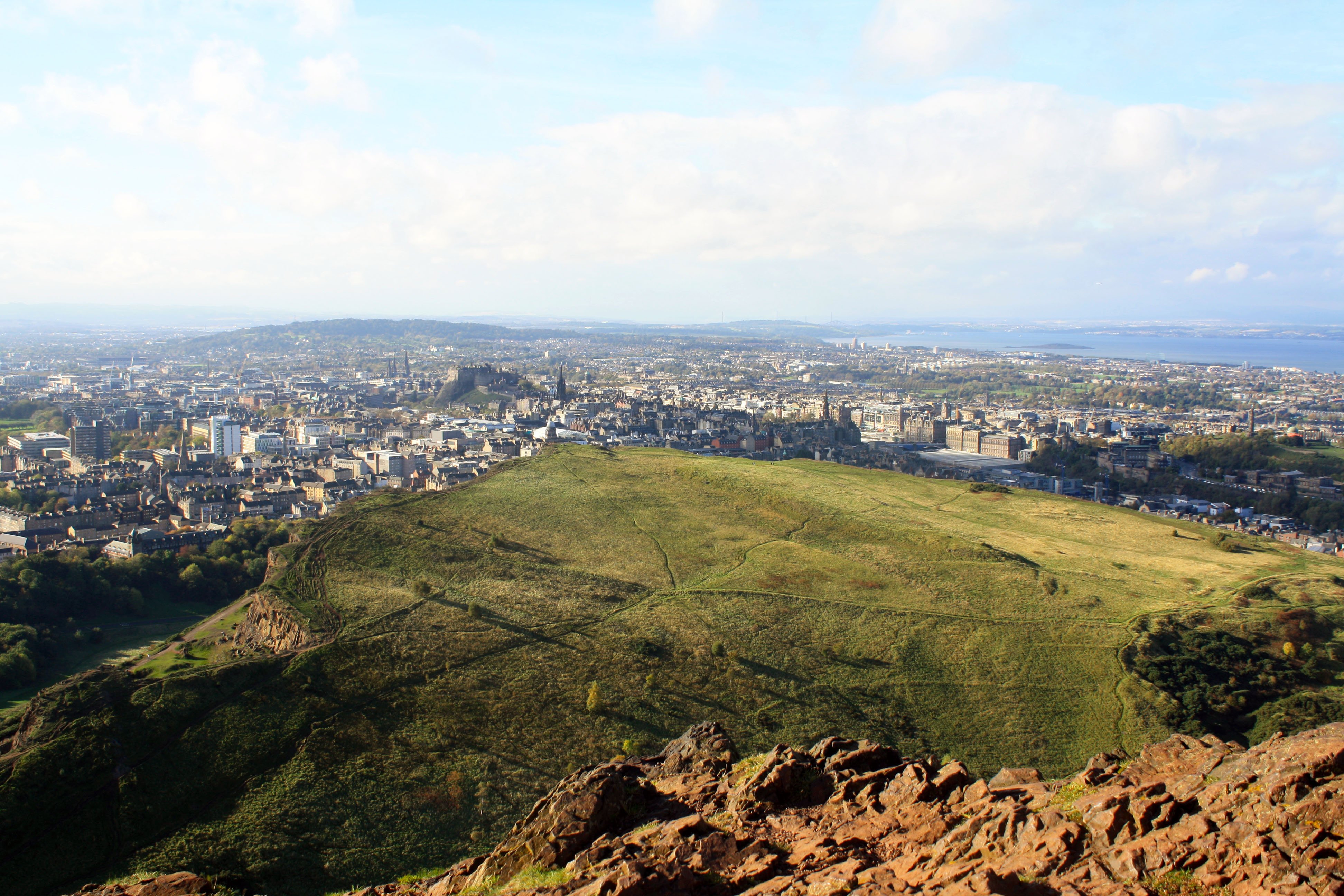 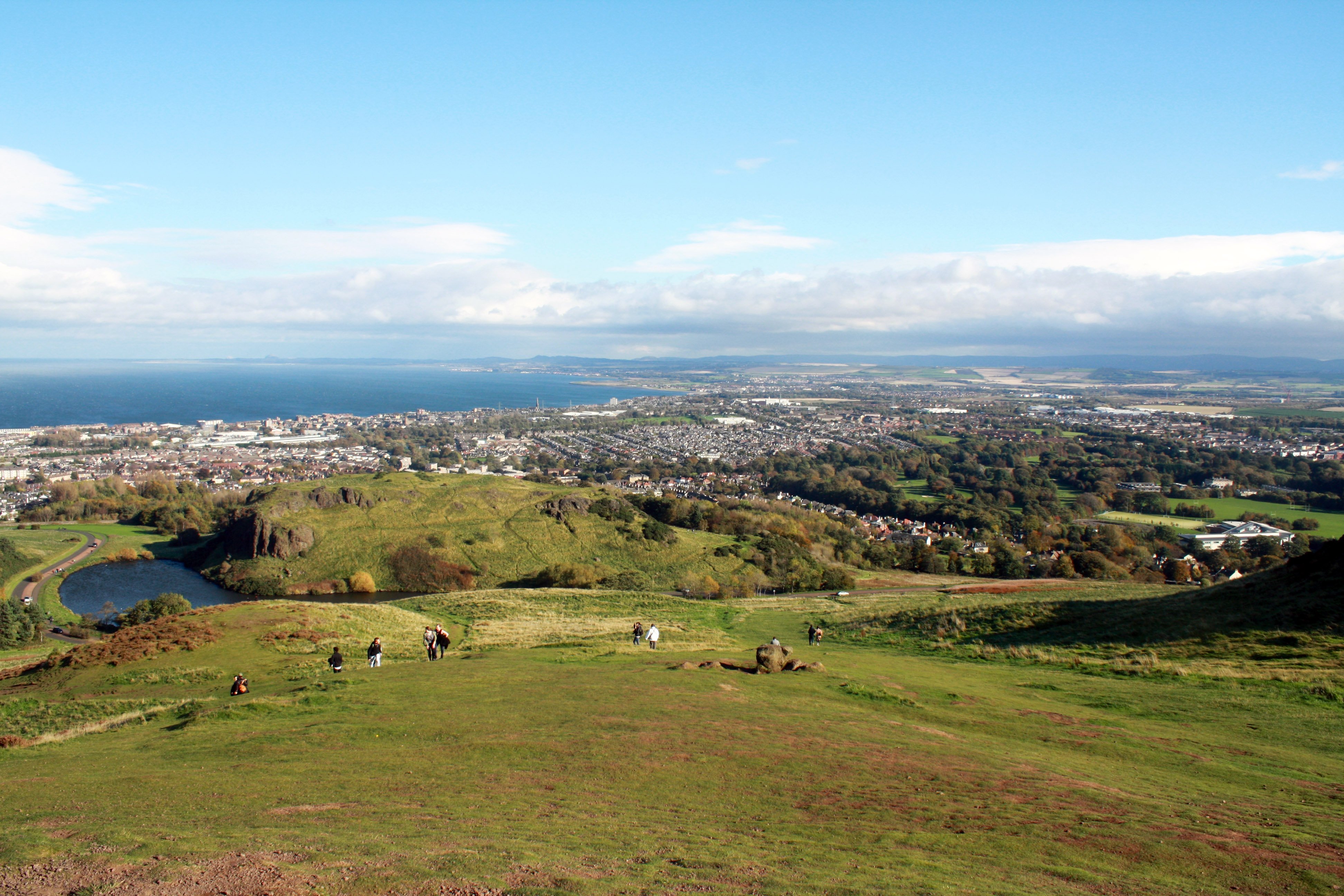 Walking Arthur’s Seat is about a 2 hour round hike. Getting there is quite easy – for a warm-up take a nice walk from Edinburgh Castle, down the Royal Mile to Holyrood Palace and across to the start of the Arthur’s Seat trail. There’s also some parking at the bottom of the hill if needed! The hike isn’t too strenuous and isn’t too difficult but remember to wear comfortable clothing and shoes. However, it can get especially windy towards the peak (as we found out), so make sure you have enough strength by bringing water and something to eat along the way.

As you start ascending the green hill, you’ll walk past the ruins of St Anthony’s Chapel. This 15th century chapel was originally rectangular with a tower but now only a corner remains. Despite its strategic location on Arthur’s Seat, very little is known about it, but it’s thought to be associated with Holyrood Abbey. 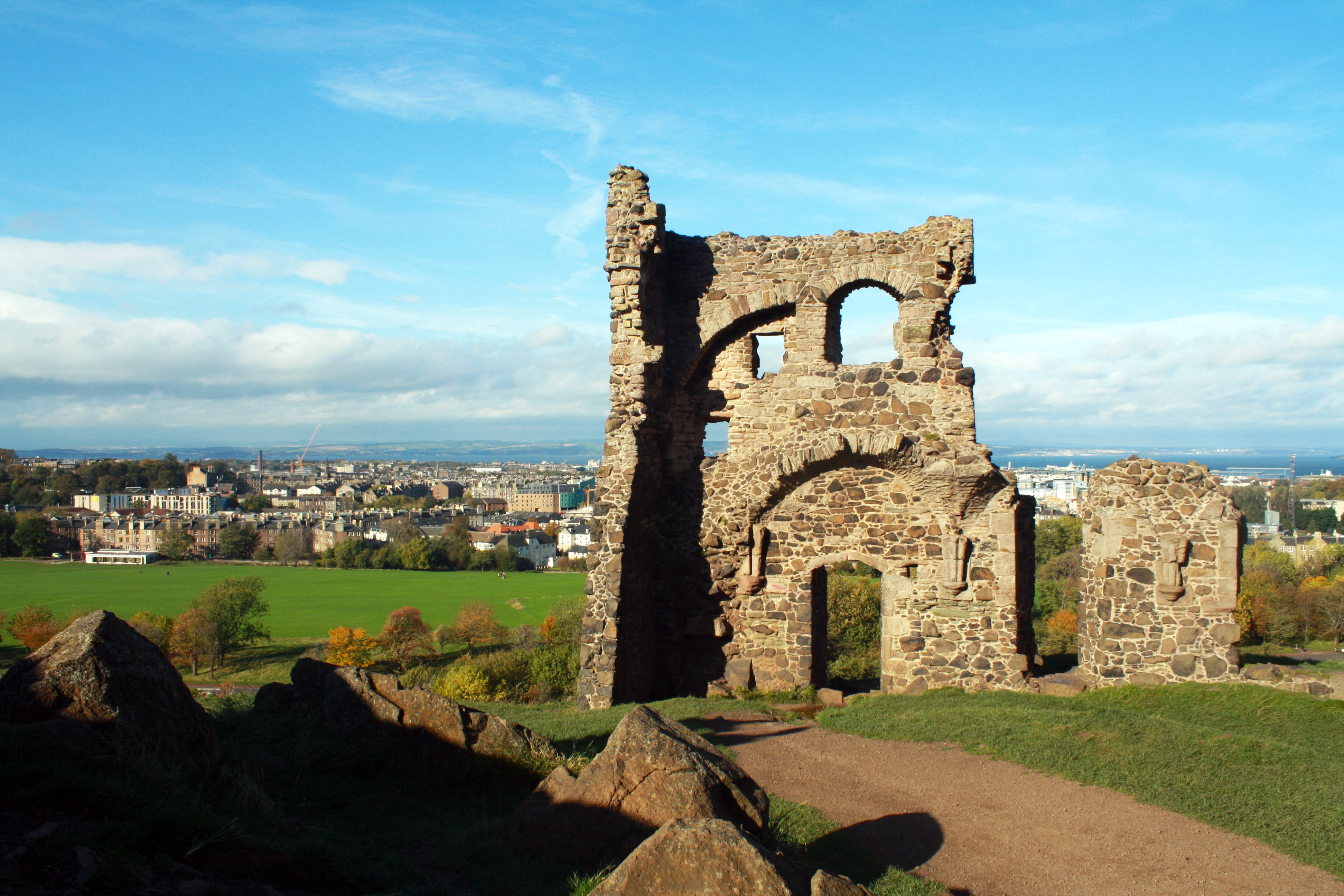 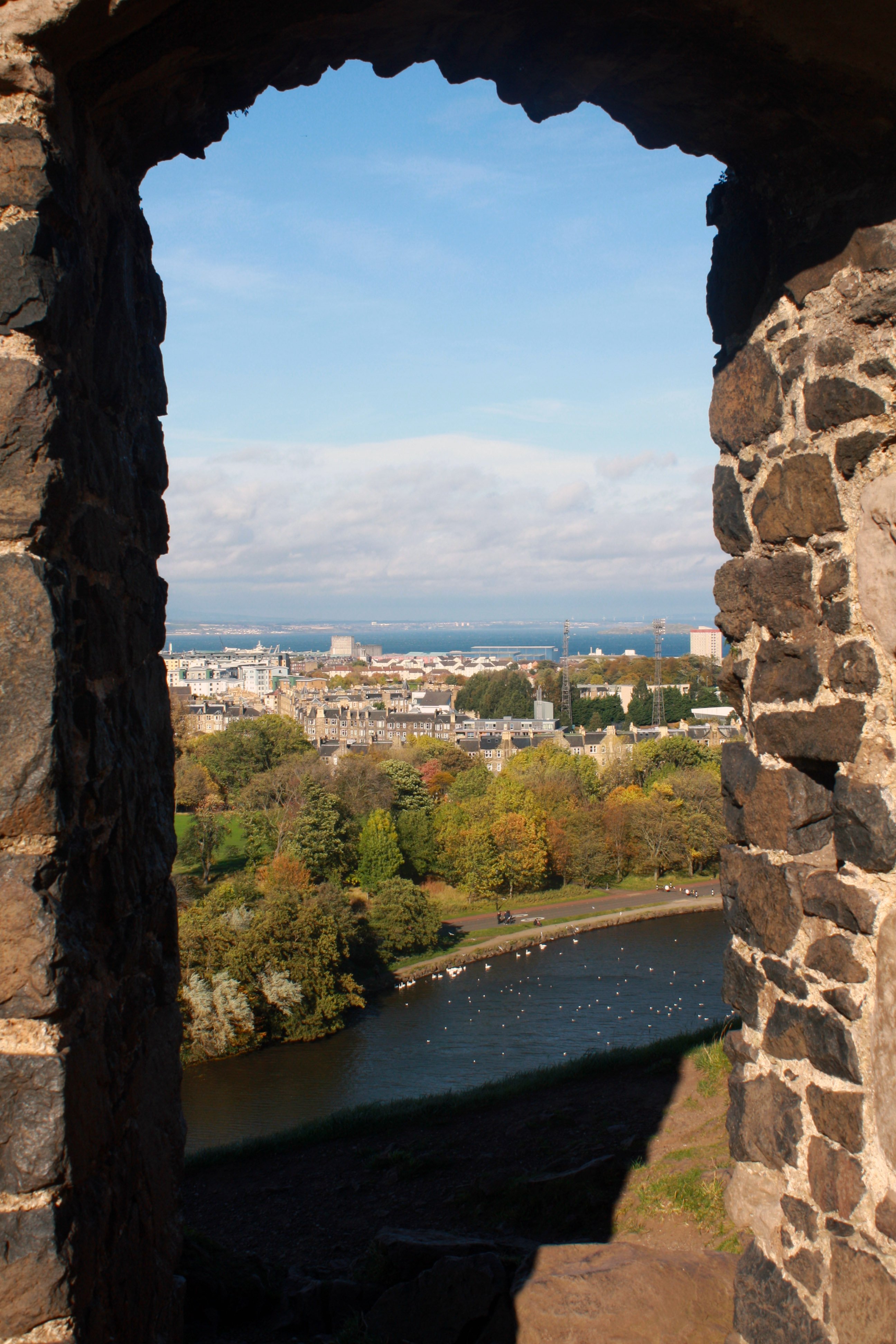 The dark and pointy silhouette of the Scott Monument stands imposingly in the heart of Edinburgh’s New Town. The Victorian Gothic tower is dedicated to Sir Walter Scott, one of Scotland’s most famous novelists whose white marble statue rests at the feet of the monument’s arches. 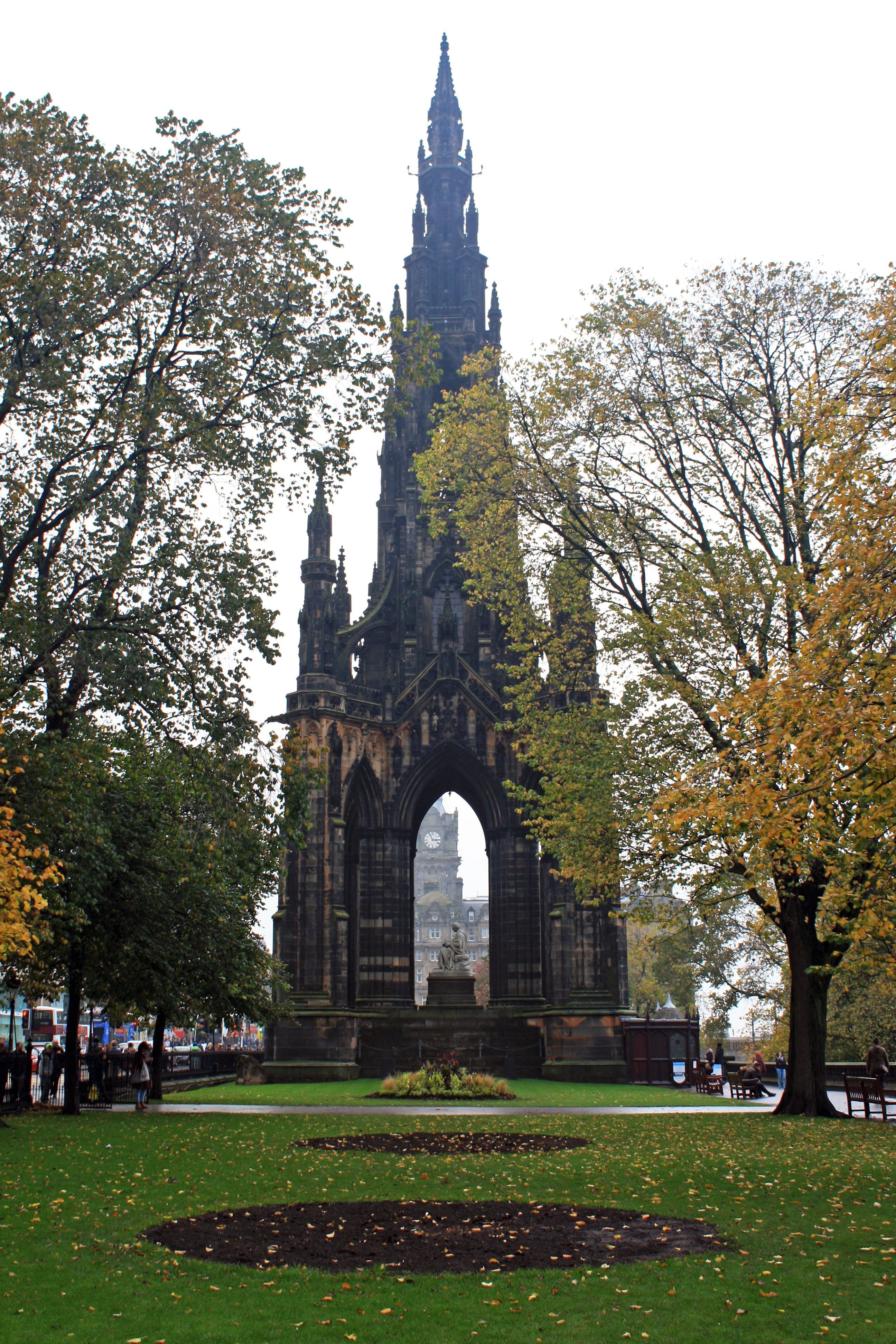 Reaching the 61.11 metres (200 ft 6 in) high, the Scott Monument offers a unique snapshot of the Old Town’s roofs from a number of viewing platforms which you can access by a narrow spiral staircase with a total of 288 steps!

The blackened façade of the Scott Monument, much like a lot of buildings in Edinburgh, is a result of the pollution during Victorian times and creates a dramatic contrast with the greenery of the Princes Street Gardens that surround it. The two parks were created by draining Nor Loch, Edinburgh’s largest loch, and currently run along Princes Street. They’re divided by The Mound, an artificial hill acting as a border between the Old and the New Town. 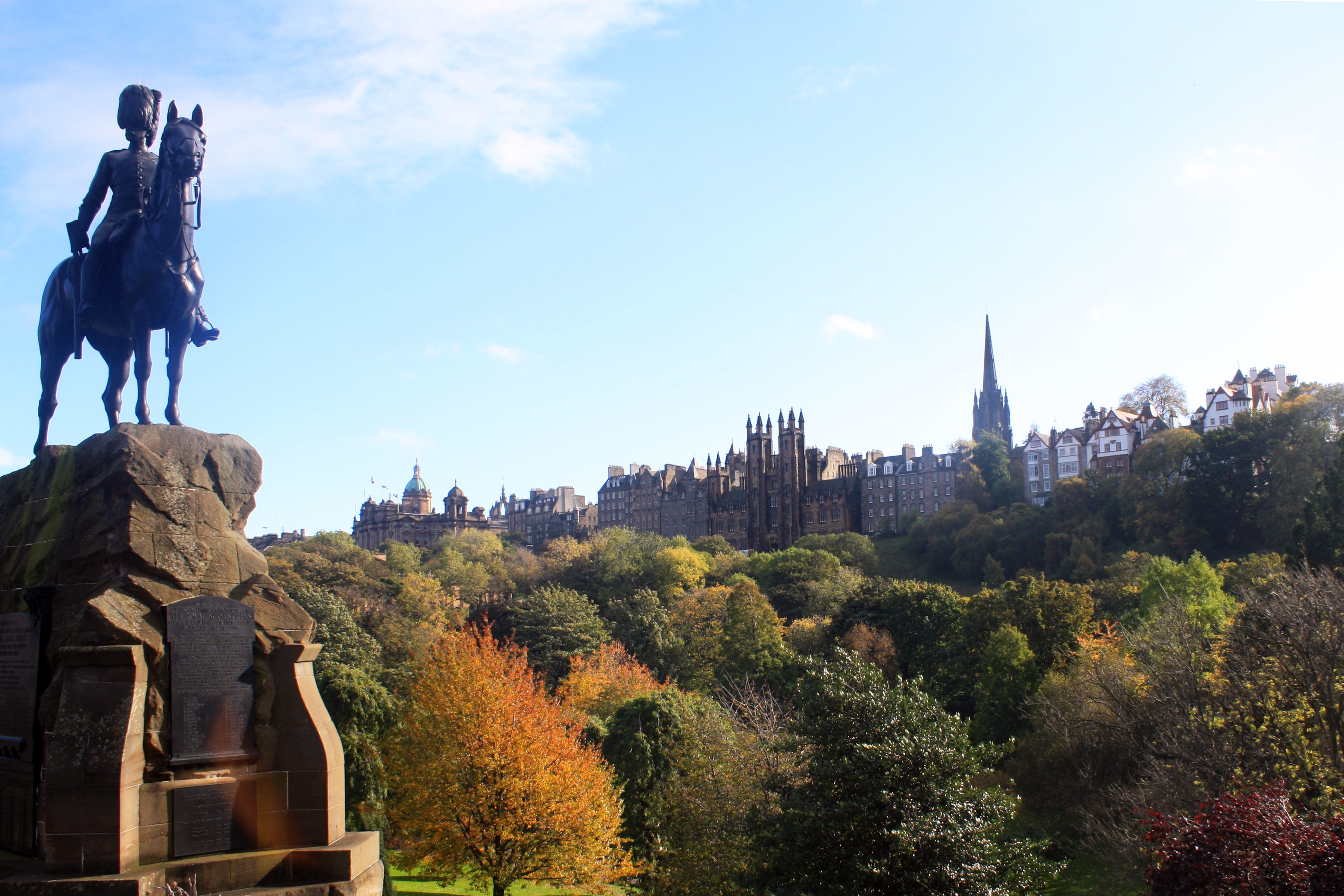 At the Eastern end of Princes Street and Old Town stands Calton Hill. Originated by the same volcanic eruption that created Arthur’s Seat and Castle Hill, Calton Hill is home to an endearing display of historic landmarks of the city of Edinburgh. These include the unfinished Greek-inspired acropolis known as the National Monument, designed as a replica of the Athenian Pantheon and a memorial to the Scottish servicemen who died in Napoleonic Wars. Other important buildings include Nelson’s Monument, Robert Burns Monument, Political Martys’ Monument, the Old Royal High School and the City Observatory. 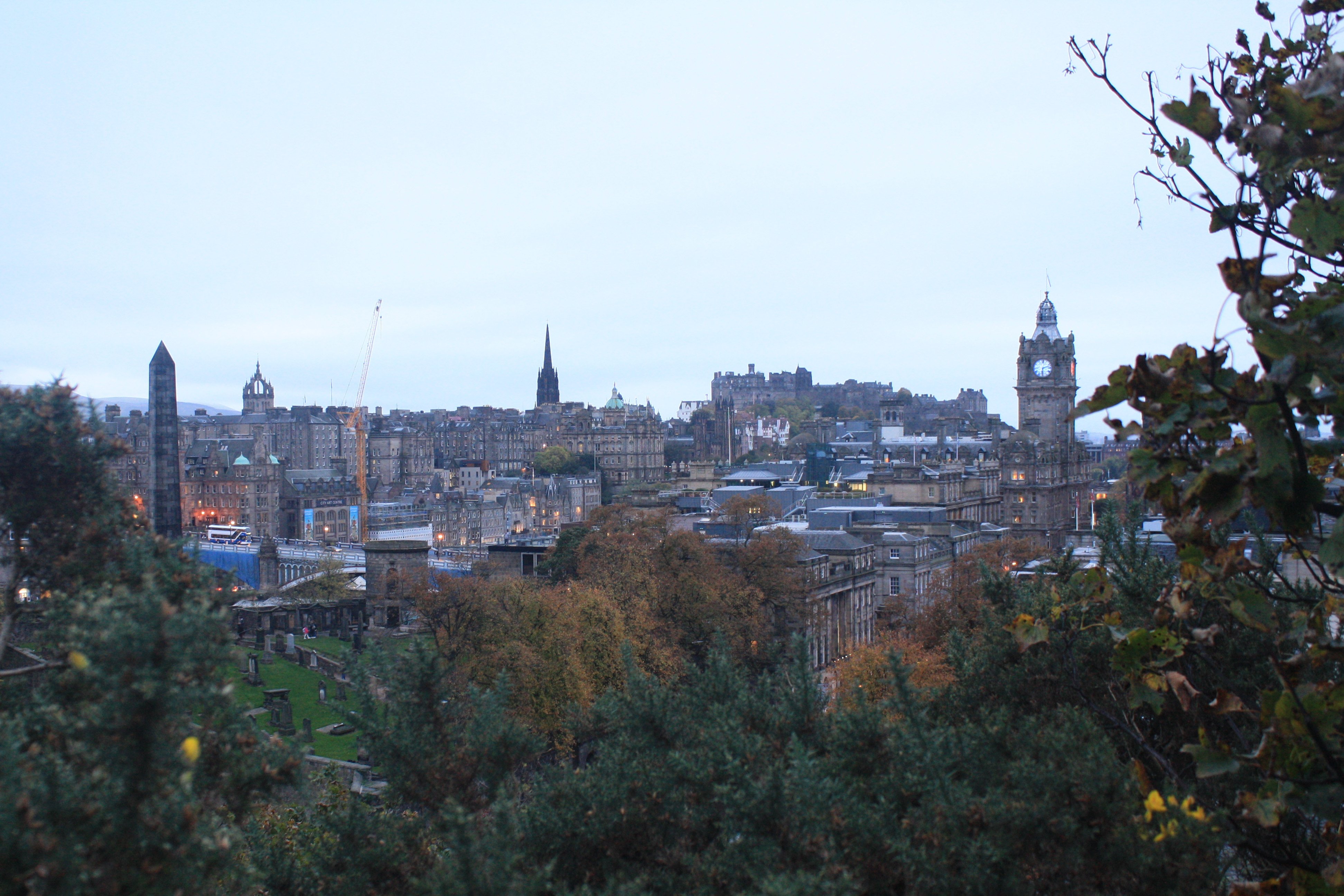 However, one of the most iconic monuments on the hill is the Dugald Stewart Monument, built in 1831 in honour of the Scottish philosopher. The circular shaped temple, now a grade A listed building, features nine Corinthian columns and overlooks the centre of Edinburgh and Edinburgh Castle. 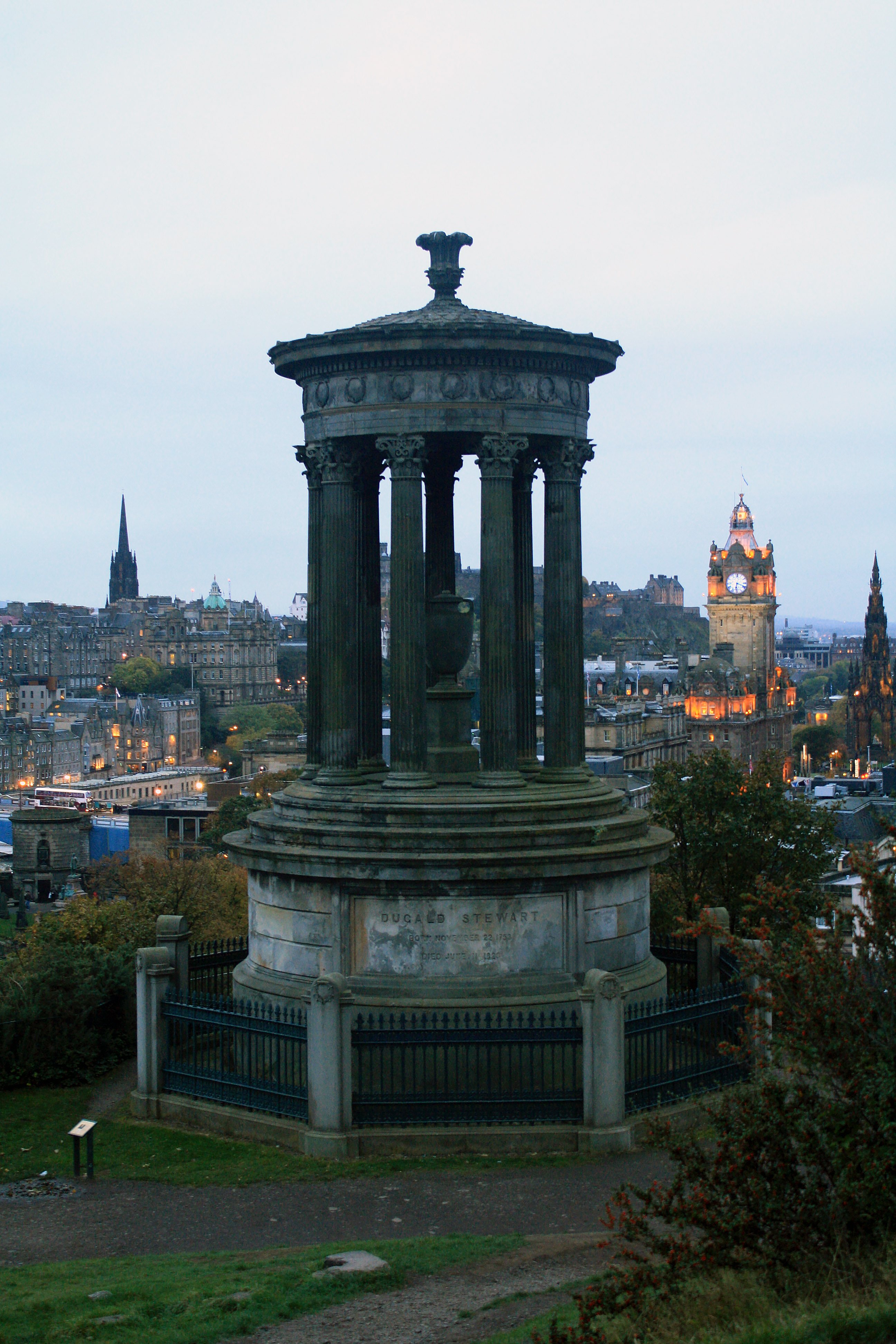 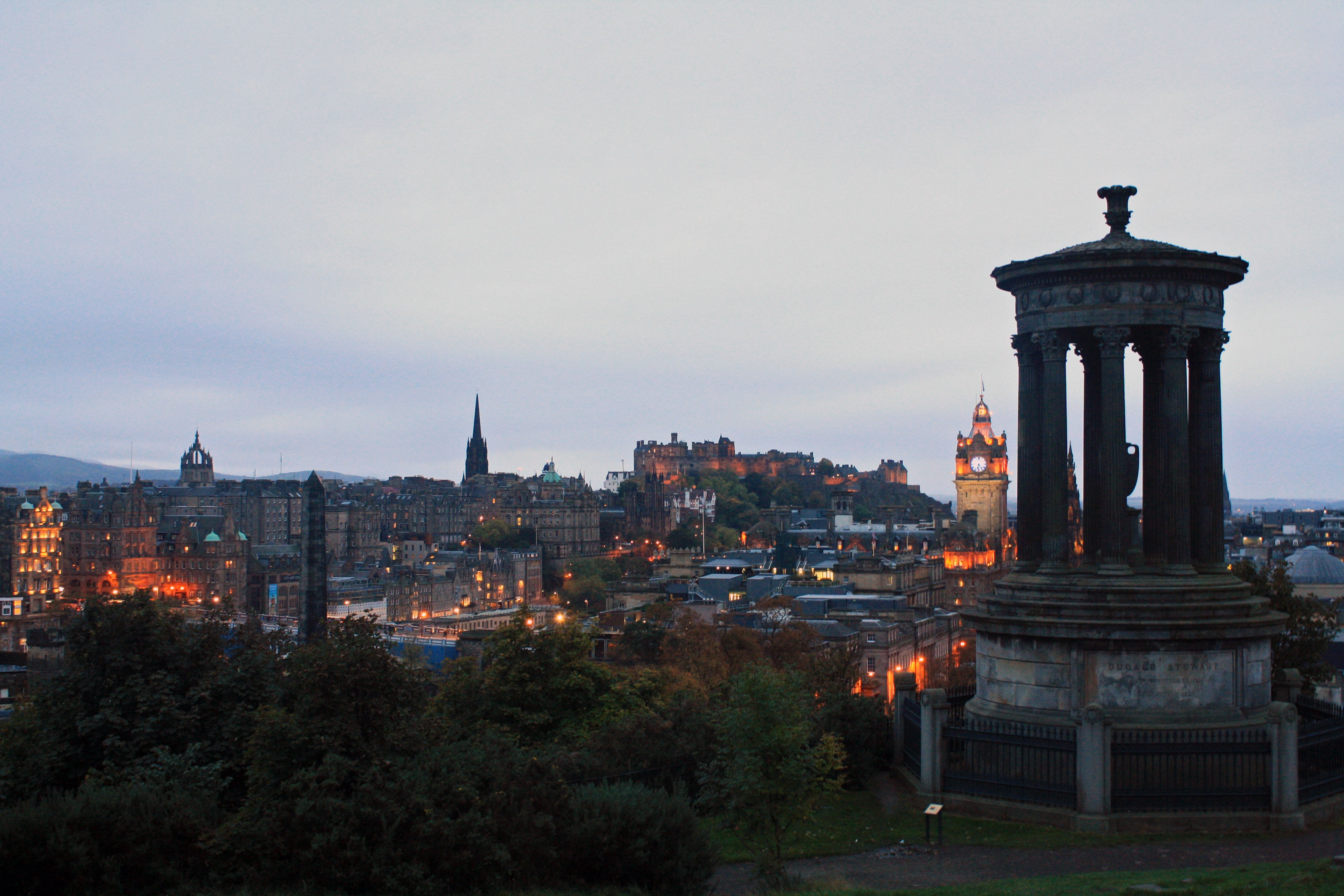 Dean Village is by far one of the most picturesque corners of the Scottish capital. It’s hard to imagine such a peaceful place would even exist in a dynamic city like Edinburgh. But truth is, going out of your way to explore this picturesque neighbourhood is absolutely worth it. 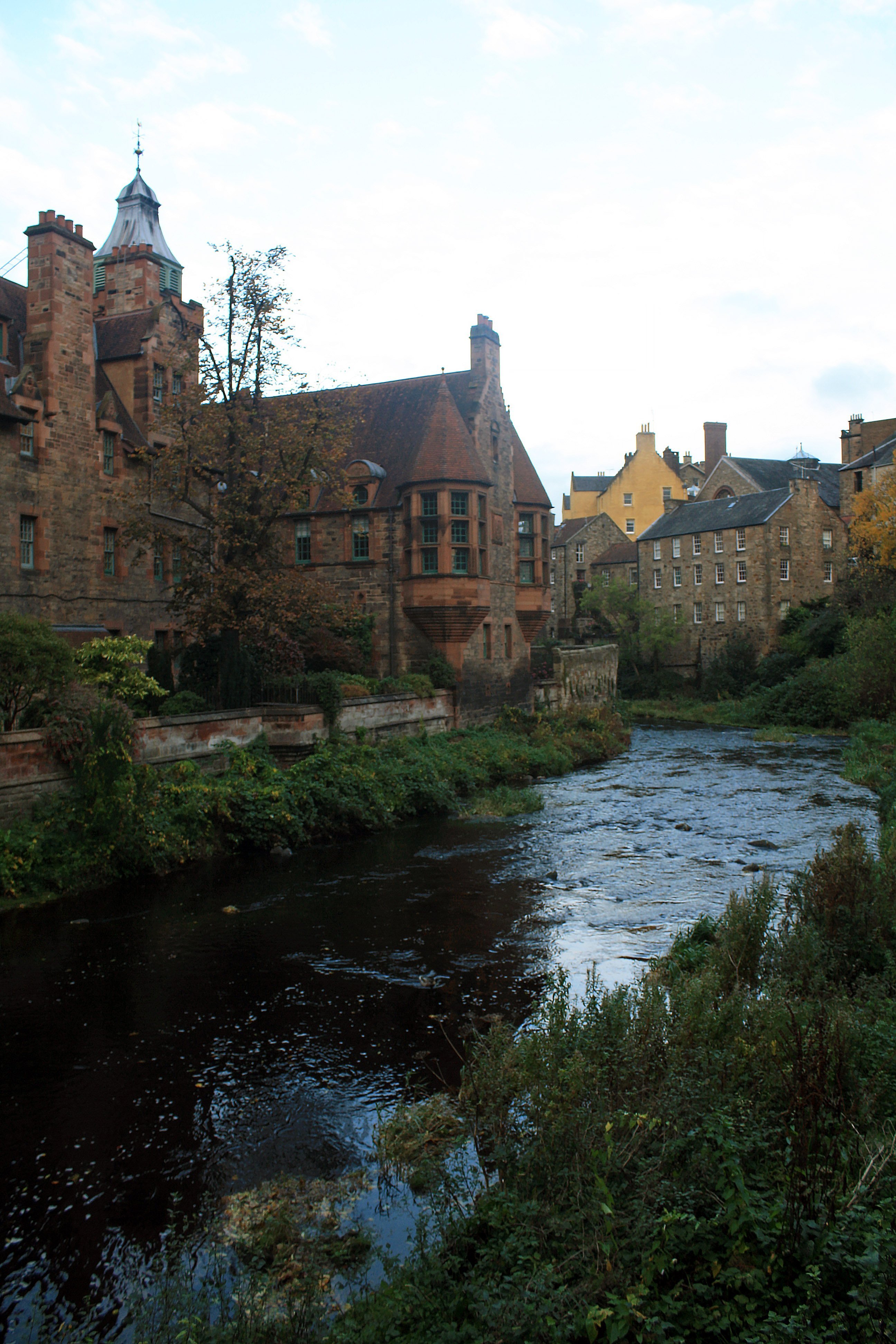 Sitting on the banks of the Water of Leith, on the west side of Edinburgh near Stockbridge, Dean Village is the polar opposite of the hustle and bustle of the Royal Mile. Cobblestone alleys, meadows, old millstones and colourful old buildings are complimented by the peaceful sound of the Water of Leith. Once entirely separate from the city of Edinburgh, Dean Village was originally where milling of water mills took place. Important landmarks in the area include the Scottish Gallery of National Art, Well Court (a refurbished Victorian housing building commissioned in the late 19th century by the then owner of the Scotsman newspaper, Sir John Findlay) and Dean Bridge (a four arched bridge).

Just like Dean Village, Circus Lane is arguably one of the most gorgeous corners in Edinburgh. This residential cobbled alley sits in the Stockbridge neighbourhood, a stone’s throw from the Sunday Stockbridge Market (an absolute must if you are in the area!). Just like other back alleys built in the 17th and 18th centuries, its main purpose was to house the stables of wealthy families, thus keeping the smell and noise from the main residences. Now, beautiful flowers fill the alley, making it the perfect Instagram spot even when the Scottish weather isn’t at its full potential! 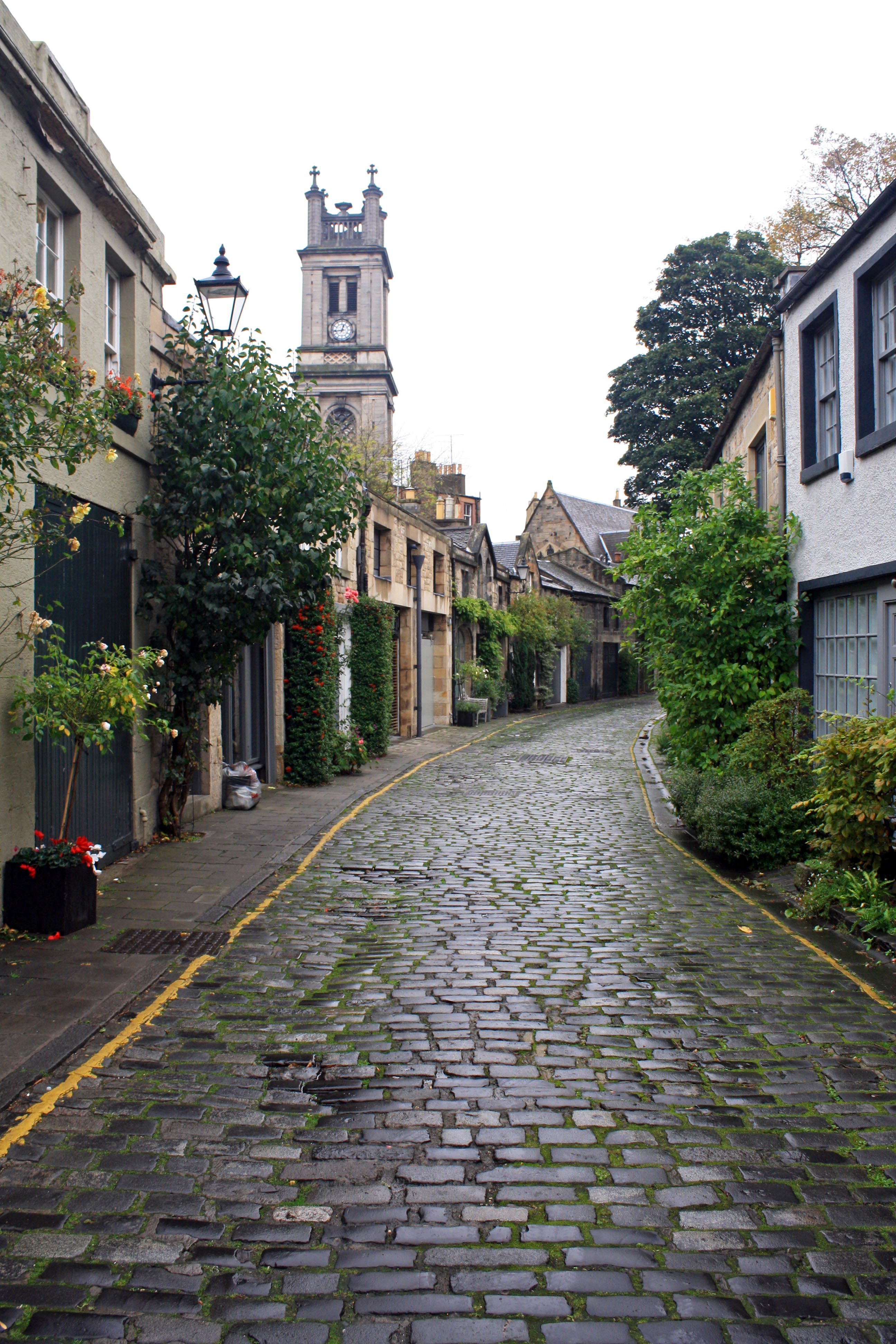 The story of Greyfriars Bobby is a sad but heartwarming one. Legend says a small Skye Terrier named Bobby remained vigilant for 14 years at the grave of his master, John Gray (known as Auld Jock), a local policeman. No matter the weather conditions, the little doggo wouldn’t leave Auld Jock’s grave in the old Greyfriars Kirkyard until his death in 1872. A statue of Bobby was placed at the entrance of the cemetery to commemorate his loyalty to his master, and it’s said that rubbing its nose will bring you good luck!

Located on The Mound, the Scottish National Gallery hosts a collection of some of the most magnificent pieces of international and Scottish fine art in the world. These include works from different stages in the history of art, from renaissance to surrealism and contemporary art, with masterpieces by Van Gogh, Monet, Rembrandt and Gaugin, among others. Admission is free, although some temporary exhibitions may charge!

Other things to do in Edinburgh

The list of must-sees in Edinburgh is a long one and can go on and on for ages. This beautiful capital is a total treasure trove of gems and I already can’t wait to go back!

Have you been to Edinburgh before? If so, what’s your favourite part of the city? If you really loved our best things to do in Edinburgh Travel Guide, please leave us a comment, pin some photos and show us some love on social media using the buttons below