We’ve made it to San Francisco! After taking you to New York, London and most recently to Los Angeles, it was only natural for me to keep the Sofa Travels series in the sunshine state. Admittedly, our three-week long road trip around California was one of the best travel adventures I’ve ever had in my life. And yes, I very much look forward to go to again. My excuse this time is checking out some places that were used as filming locations for movies set in San Francisco.

As you may have guessed, this post explores all the best movies set in San Francisco (in my humble opinion), in chronological order. From drama to mystery and comedy, I have picked the films that I think you should absolutely add to your cinephile bucket list. Remember to use the hashtag #SofaTravels to let us know you’re joining the movement, or to just simply share other movies to watch. Have fun!

This psychological thriller masterpiece directed by Alfred Hitchcock is an adaptation of the 1954 novel D’entre les morts, written by French crime authors Boileau-Narcejac. Here, retired Detective Scottie Ferguson, who suffers from vertigo, is hired to follow an old friend’s wife who seems to be in danger. Strange events start happening and he soon finds himself falling in love with her.

Vertigo features plenty of signature locations in San Francisco, such as Fort Point and the Golden Gate Bridge, the Palace of the Legion of Honor and the Palace of Fine Arts. Scenes also include Mission Dolores (the oldest building in San Francisco), as well as the SF skyline with the Coit Memorial Tower in the background.

Dustin Hoffman stars in this comedy drama as recent university graduate Benjamin Braddock. Unsure about what to do with his life, he’s suddenly lured into an affair with his dad’s business partner’s wife. Of course, it all gets complicated when he falls for her daughter!

Although most of the scenes were actually filmed in Los Angeles (you can see more of the best movies set in Los Angeles here), The Graduate features some iconic shots of the San Francisco Zoo and the Oakland Bay Bridge.

The first Don Siegel/Clint Eastwood movie set in San Francisco on this list. This classic 70s action thriller with Clint Eastwood as Police Inspector Harry Callahan, in charge of catching rooftop sniper Scorpio Killer who is terrorising San Francisco. His tracking methods, however, go against legal rights and bureaucracy, putting many innocent lives in danger.

Dirty Harry was filmed all over San Francisco. You’ll be able to see shots of the Mount Davidson Cross, the Kezar Stadium at the Golden Gate Park, as well as the impressive Grand Staircase at the San Francisco City Hall.

Other iconic buildings include the Saints Peter and Paul Church and the Hall of Justice.

In The Conversation, Surveillance expert Harry Caul (played by Gene Hackman) is hired to spy on a young couple. After listening to a clandestinely recorded cryptic conversation between them, he becomes increasingly worried that they will be murdered.

Notable locations in The Conversation include the San Francisco Union Square (where Harry Caul tracks the young couple to), the famous St Francis Hotel and Alta Plaza Park in Pacific Heights.

Clint Eastwood is back for Don Siegel’s adaptation of the 1963 book about the June 1962 Alcatraz escape. Eastwood portrays inmate Frank Morris who, alongside convict brothers Clarence and John Anglin, embark in what is probably one of the most famous escapes from a maximum security facility in the word.

Although some interior shots where recreated in the Paramount studios in Hollywood, the majority of the scenes were actually filmed on Alcatraz Island in the San Francisco Bay!

Crime novelist Catherine Tramel (Sharon Stone) becomes the main suspect after her boyfriend seems to have been killed the same way as one of her fictional characters. After being seduced by her, Detective Nick Curran (Michael Douglas) finds it incredibly difficult to investigate her and is soon met with more connected deaths.

Iconic scenes showing off San Francisco include the Fisherman’s Wharf and the Oakland Bay Bridge near the Embarcadero, as well as an overview of the Financial District with the Transamerica Pyramid in the background.

A fun Chris Columbus comedy starring Robin Williams as Daniel Hillard, a voice actor who comes up with a cheeky plan to spend more time with his children after his wife files for divorce. The plan, you ask? Dressing up as Mrs. Doubtfire, an old Scottish nanny!

Zodiac brings one of the most famous unsolved murder mysteries from the late 60s/early 70s US to the big screens. It tells the story of the Zodiac Killer’s manhunt through the investigators and the San Francisco Chronicle reporters who become obsessed with decoding the serial killer’s encrypted letters, who threatens to continue killing unless his identity is revealed. Starring Jake Gyllenhaal, Robert Downey Jr, Mark Ruffalo and Anthony Edwards.

The ultimate Zodiac movie map includes the Transamerica Pyramid (which is being built as the storyline progresses), the Castro Theatre, the San Francisco Chronicle building, the San Francisco City Hall and the corner of Washington and Cherry in Presidio Heights where the Zodiac actually killed taxi driver Paul Stine in 1969.

This biographical film set in San Francisco showcases how Harvey Milk (Sean Penn) became the first openly gay man to be elected to public office in California and the US. He also helped transform the iconic Castro District as a historic centre for the LGBT community.

Other buildings include the Federal Reserve Bank of San Francisco, Grace Cathedral and the San Francisco City Hall.

Always Be My Maybe film locations in San Francisco

Always be My Maybe takes us on a cultural tour through lovely shots of the Pier, the City Farmers Market at United Nations Plaza and Hotel Fairmont San Francisco. As well as the Golden Gate Park and the Young Museum and the Palace of Fine Arts.

Other locations include the Musée Mécanique at Pier 45 in Fisherman’s Wharf and the buzzy Haight-Asbury District. Also, a room inside the Contemporary Jewish Museum was transformed into Maximal Restaurant, where you can see Keanu!

Based on a true story, this drama focuses on Jimmie Fails and his best friend Mont Allen as they struggle to reclaim Jimmie’s childhood home – a now expensive Victorian house built by his grandfather in the historical Fillmore District.

This movie takes us to Fillmore District, where you can see the Chateau Tivoli Bed and Breakfast. Also the Bayview–Hunters Point neighbourhood and the Hotel Metropolis in the Tenderloin (with the iconic “Stay” written on its façade).

If you’re looking for the Victorian house in question, it’s actually located in the Mission District!

To make it even easier for you, I’ve created a best movies set in San Francisco checklist for you to keep track of all the movies you’ve watched. Simply click on the image and save.

Let us know if you watch any of the movies in the post or if there are any films set in San Francisco that we’ve missed! 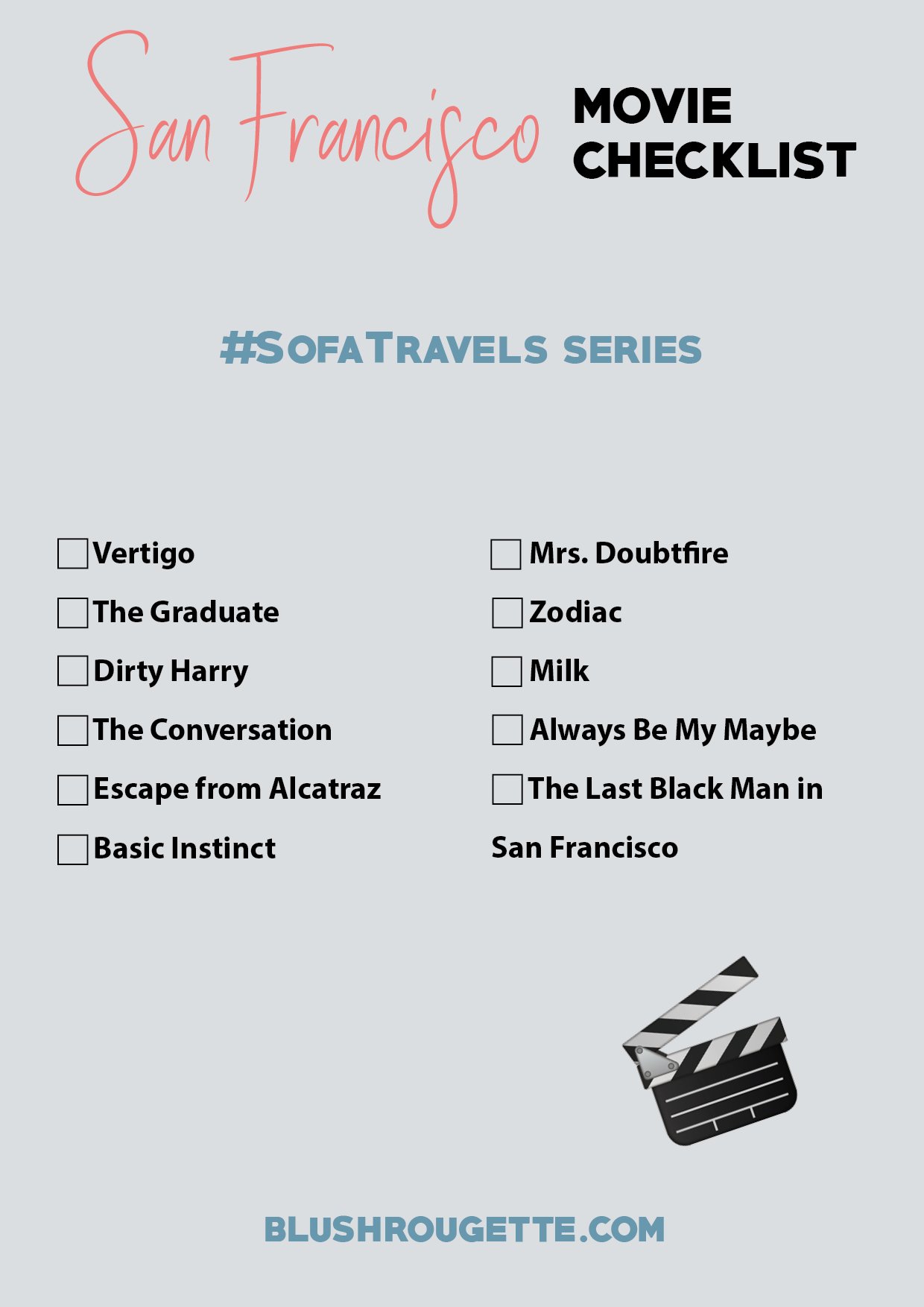