It’s no secret that I live and breath travel. Whether it’s a UK mini break, a flight across the pond or a trip to the nearest Australian brunch place in London, I try to experience as many of the little pockets of the planet as I possibly can. This blog is focused entirely on bucket lists and food for a reason! Now, with the current COVID-19 restrictions in place, travelling to another city (let alone to another country) has become almost impossible, only when strictly necessary.

So I’ve found myself wondering…How can we bring travel to our homes? How can we do a bit of country hopping from the commodity of our sofas? That’s why I figured I would share some of the best movies set in different parts of the world in a series of posts I’ve called, well, Sofa Travels.

Each post will transport us to a particular city and points in time without actually leaving our living rooms. It comes with a checklist too (and will hopefully also inspire a little summer holiday when all of this is over). We’re starting with iconic movies set in New York. Use the hashtag #SofaTravels to let us know you’re joining the movement, or to just simply share other movies to watch.

Here are the best movies set in New York City in chronological order.

A classic movie set in New York with Audrey Hepburn, based on Truman Capote’s novel from 1958. Hepburn is Holly Golightly, a young Manhattan socialité who works as an escort but wants to marry a rich man. It all gets complicated when a man (George Axelrod) moves into her NY apartment building. He is with an older and rich woman, but secretly wants to become a writer.

The most iconic spot of the movie is, of course, the Tiffany & Co Store at 757 5th Avenue and East 57th Street in Manhattan, where Audrey dreamily gazes at the window while having breakfast.

The gangster movie that starts Don Vito Corleone’s trilogy. A masterpiece with Marlon Brando as the head of a mafia family in NY, and Al Pacino as his son Michael, soon to become the future Don.

Robert de Niro stars in this psychological drama as a Vietnam veteran and ex-marine who works as a NY cabbie. He becomes increasingly lonely and gets obsessed with rescuing an underage prostitute in an effort to save humanity.

Naturally, the Taxi Driver film locations are shot throughout the whole city of New York, mainly in Manhattan. The most iconic ones include Time Square, Columbus Circle and St. Regis Hotel.

A romcom set in New York starring Meryl Streep and director Woody Allen himself, about a couple who get divorced after she leaves him for a woman. Subsequently, Allen starts dating an underage high-school student while Streep writes a book about how bad their relationship was.

Scenes showing off NYC include a fundraising event at the MoMA and an iconic carriage ride through Central Park.

A fun movie for the whole family, starring Bill Murray and Dan Aykroyd (who also wrote the film) as two of the four parapsychologists who start capturing ghosts after loosing their jobs at Columbia University. Sigourney Weaver stars as Murray’s love interest, who is possessed by a demigod.

The film starts with a supernatural appearance at the New York Public Library giving you a good sneak peak inside!

Another romcom for you, this time with Meg Ryan and Billy Crystal. The two recently graduated Chicago University students meet on route to their new lives in NY. They spend the whole ride arguing whether men and woman can simply be friends. After meeting 12 years later, they struggle to stay friends without sex interfering in their relationship.

And if you ever go to Katz’s Deli (an all-time favourite of ours), I hope that you have “What she’s having!”. You can also find a stall at DeKalb Market Hall – check out our best food markets in NY post to find out more markets.

Another Scorsesse mob classic set in New York, narrating the story of three NY gangsters in their rise to the top. It stars Ray Liotta, Robert de Niro and Joe Pesci, who received an Oscar for his supporting role as Tommy DeVito.

Although GoodFellas is set in working-class Brooklyn, most of these scenes were actually shot in Astoria, Queens. You can still visit various locations of GoodFellas around Astoria today. The three gangsters also spend most of their nights at the famous Copacabana nightclub. However, this was filmed at the old Copacabana location at 10 East 60th Street, New York.

Macaulay Culkin reprises his role as Kevin McCallister for a classic Christmas film set in New York when he ends up in New York, after accidentally boarding the wrong plane. With his family stuck in Florida, he tries to prank the Wet Bandits, his old enemies, once again.

Donald Trump makes an appearance in the luxury Plaza Hotel, where Kevin stays. The Christmas tree in Home Alone 2 that Kevin reunites with his mum in front of, is actually the Rockefeller Center Christmas Tree, a must see at Christmas in New York!

An action thriller movie set in New York starring Jean Reno (Léon), Gary Oldman (Stansfield) and young Natalie Portman (Mathilda). Reno is a professional hitman, who reluctantly ends up taking care of Portman after her family is murdered by the DEA.

Interior scenes of Léon’s apartment, including the iconic stairwells, were actually shot inside the Chelsea Hotel. You see Mathilda take the aerial Roosevelt Island Tramway, giving a different perspective of New York’s skyscrapers. There are also some views of Central Park when Mathilda shoots a jogger running under the Pinebank Arch with a blank bullet. Hopefully that only happens in the movies!

Bruce Willis is back as NYPD detective John McClane in the third movie of the Die Hard saga and the first of the movies set in New York City. Samuel Jackson (Zeus) helps him in quest to capture a terrorist (Jeremy Irons as Gruber) who has taken parts of NY hostage in a game of “Simon Says”.

Die Hard with a Vengeance film locations in New York

There’s no hiding that this movie’s based in New York City with scenes shot throughout the city. McClane is forced to parade through Harlem wearing a racist sign, with parts also filmed in Washington Heights. The movie shows off the impressive neo-Grec style O’Neill Building (right before Gruber has his way with it!). We get a sneak inside the Yankee stadium when Zeus is on the hunt for a bomb.

There’s even a taxi ride courtesy of McClane through Central Park (literally) down to Wall Street! A big part of the film is based in the Federal Reserve Bank, however only exterior shots off the bank were permitted.

Tom Hanks (Joe) and Meg Ryan (Kathleen) tell the story of two booksellers who fall in love online but are unaware they are business rivals (literally across the street from each other!). One of the best romantic movies set in New York City.

Scorsese brings another of his mob movies set in New York. This time in the late 19th century, narrating the story of two NY gangs enemies – the Natives and the Irish immigrants. After being released from prison, Leonardo DiCaprio seeks to avenge his father’s death in the hands of the Natives. But to do so, he needs to infiltrate their inner circle.

Although not quite as aspirational as You’ve got Mail, Gangs of New York demonstrates the gritty side of NYC. With the two gangs fighting over the 19th century Five Points neighbourhood in the Lower Manhattan, Scorsese gives an insight to life in the slums of New York.

One of the best Christmas movies set in New York City! Will Ferrell is Buddy, a human who was raised by elves in the North Pole. He decides to find his real father, Walter, in NY after discovering he is not an elf.

Throughout this Christmas favourite Buddy explores all over Manhattan, showing off some of its famous landmarks. When Buddy goes to visit his Dad, who works at a book publishers in the Empire State Building, we get to see a sneak peak inside.

This is another movie with scenes at the Rockefeller Christmas Tree and at Pinebank Arch. However, Buddy is firing snowballs in a snowball fight, rather than blank bullets at joggers! There are then further scenes of the film shot in Central Park including Belvedere Castle and Bethesda’s Terrace. There’s also an appearance from the fearsome Central Park Rangers (they’re not that scary in real life!).

A comedy drama starring Tom Hanks, a citizen from fictional Krakozhia who is trapped at JFK airport. A Civil War in his country invalids his passport, and he can’t leave or enter the US. So what can he do? The answer is simple: he must stay at the terminal, indefinitely.

Based on the book of the same name, it stars Meryl Streep as fashion editor Miranda Priestly (loosely based on Vogue’s editor Anna Wintour). Anne Hathaway plays Andy Sachs, an aspiring journalist who finds herself as her new assistant.

Andy celebrates her new job at Runway magazine by visiting Bubby’s. Which is also our favourite place for pancakes in New York! You can check out our Bubby’s review too.

The Natural History Museum is also used as the venue for the annual Runway Gala.

A sequel to the successful tv series of the same name, both the tv show and movie are based in New York City. Carrie Bradshaw (Sarah Jessica Parker) is about to marry her on-and-off lover Mr. Big, but things go wrong as he gets cold feet on the day of the wedding.

Sex and the City film locations in New York

Thanks to the show Carrie Bradshaw’s apartment at 66 Perry Street in Greenwich Village, Manhattan has become a must see (we even stopped by on our last trip to the Big Apple!).

The Sex and the City movie also shows off New York’s excellent culinary offers with scenes at restaurants across the city including, The Modern (inside the MoMA), Buddakan, The Mercer Kitchen and Raoul’s.

You could probably guess from the title that this movie’s set in New York. This corruption drama/comedy tells the true story of stock-broker Jordan Belford on his rise to fortune after a Wall Street crash. It stars Leonardo DiCaprio as Belford, Jonah Hill as his business partner Donnie Azoff, and Margot Robbie as Belford’s wife.

The Wolf of Wall Street film locations in New York

As the title hints there are plenty of scenes showing off the life on Wall Street, including the New York Stock Exchange and the Equitable Building (where Jordan gets his first job as a licensed broker). There’s also the iconic chest beating scene at, what was, Top of the Sixes, showing off the Manhattan skyline.

To make it even easier for you, I’ve created a best movies set in New York checklist for you to keep track of all the movies listed above that you’ve watched. Simply click on the image and save. Have fun and let the #SofaTravels series begin!

Let us know if you watch any of the movies in the post or if there are any movies set in New York City that we’ve missed! 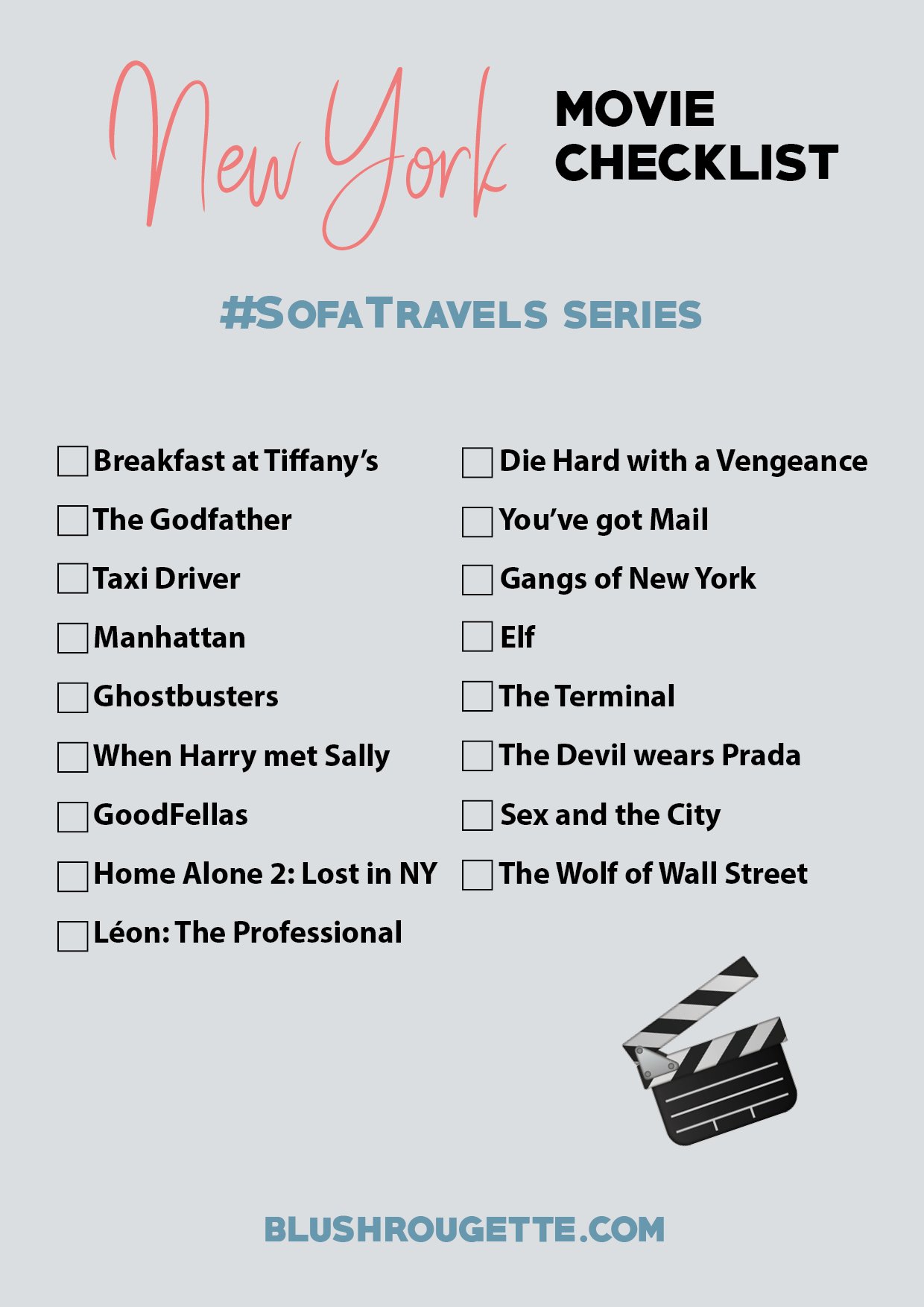 Throwback to a year ago today, when @spalmen and I

Merry Christmas everyone! I hope you’ve had a wo

Sam added this picture to his feed a few days ago,

Classic Dumbo photo 🐘 We had to stop by the Hum