A lot has changed recently, including our travel plans. Summer is just around the corner and the weather has been lovely recently, so it’s only natural to dream about a change of scenery. In my case, I’ve been reminiscing about the glorious sunny days we spent in California last September. Sunny blue skies, loads of Vitamin D and fresh salty water. I can assure you this is my idea of heaven.

With that idea in mind, might I suggest we focus this Sofa Travels post solely on the best films set in Los Angeles? Yes! I can’t think of a better moment to bring the Sunshine State straight into your living rooms (or your garden, a homemade open air cinema sounds ideal right now!).

Have a scroll through our ultimate round-up of the best movies set in Los Angeles in chronological order. And remember, use the hashtag #SofaTravels to let us know you’re joining the movement, or to just simply share other movies to watch.

A classic 80s comedy starring Eddie Murphy as Axel Foley, a police officer from Detroit. After his childhood friend gets murdered, he takes up on the investigation which eventually leads him to Beverly Hills! This movie comes will a little surprise – you’ll be able to recognise the Beverly Hills Cop main theme song as the 00s hit Crazy Frog!

Naturally, this film features plenty of shots of Beverly Hills, such as the luxury shopping street Rodeo Drive, the iconic Beverly Hills Hotel and the Beverly Hills City Hall (posting as a police station). You can also spot other parts of Los Angeles – Pasadena, Santa Monica and Downtown LA (the fictional Beverly Palms hotel is actually the Millennium Biltmore Hotel!).

A must for Christmas too (if you like watching action movies during the holiday season, that is!). In the first part of the Die Hard franchise, NYPD Detective John McClane (Bruce Willis) lands in LA to visit his estranged wife and daughter on Christmas Eve. But her office Christmas party is interrupted by a group of terrorists led by Hans Gruber (Alan Rickman), keeping everyone hostage.

Although you get a few shots of LAX at the beginning of the movie, then the majority of the scenes are set in the Nakatomi Plaza building (in reality, the Fox Plaza in Century City, LA).

If you want to carry on the Die Hard saga, make sure you check our Best Movies set in New York post, where we talk more about the third movie – Die Hard with a Vengeance! This one is set ALL OVER the Big Apple!

Of course Pretty Woman had to be on a list of the best movies set in LA! This 90s rom-com tells the story of Edward (Richard Gere), a rich corporate raider from NY who hires a prostitute named Vivian (Julia Roberts) to escort him for a few days during his business in LA. But a sudden upscale lifestyle and spending so much time together can only mean one thing: love!

As a TV weatherman in one of the sunniest places in the world, Harris Telemacher (Steve Martin) is tired of the same old superficial routine of LA. But he suddenly starts receiving messages from an electronic motorway sign and decides to pursue a romance with a British journalist (Marilu Henner) and a young aspiring model (Sarah Jessica Parker).

L.A. Story takes us on a cultural tour trough lovely shots of Sunset Boulevard, Los Angeles County Museum of Art (LACMA) and the Museum of Contemporary Art. There’s also a little gem there which, unfortunately, is no longer around, but well worth mentioning! Keep your eyes peeled for the “Tail o’ the Pup”, a fast food stand shaped like a hot dog that used to roam the streets of LA from 1946 up to 2005.

A crime/drama with Cuba Gooding Jr. as Tre, a young black boy who is sent to live with his dad in South Central LA (played by Laurence Fishburne). Alongside his friends Doughboy (Ice Cube) and Ricky (Morris Chestnut), he faces the dangers of growing up black in a ghetto neighbourhood surrounded by drugs, violence and gangs.

The majority of the scenes of Boyz n the Hood are filmed in the South Central district of LA, an area with a not-so-good reputation. You’ll also see first hand shots of Inglewood, located just east to LAX.

A classic Tarantino film set in LA and starring a splendid cast. Get ready for John Travolta, Samuel L. Jackson, Uma Thurman, Bruce Willis, Harvey Keitel, Steve Buscemi, Christopher Walken and Tim Roth, to name a few! The storyline of this crime comedy jumps back in forth in time, intertwining the story of hitmen Vincent Vega and Jules Winnfield with the ones of their gangster boss, his wife, a boxer an a pair of nervous robbers.

Pulp Fiction was filmed all over Los Angeles. You’ll be able to see shots of Hawthorne, Glendale, Canoga Park and Beverly Hills. Unfortunately, the Jackrabbit Slim’s restaurant where Thurman and Travolta have their iconic dance is not a real place!

In Clueless, Cher Horowitz (Alicia Silverstone) is a popular student at Beverly Hills High who decides to give new student Tai a makeover (played by Brittany Murphy). In the process, she copes with the problems of being a teenager who loses her popularity crown and her own feelings towards her ex-stepbrother (Paul Rudd).

Naturally, Clueless comes with plenty of shots of mansions and streets of the lush city of Beverly Hills. Outside of here, you can also spot the iconic Circus Liquor in San Fernando Valley and some exterior shots of the Occidental College (mocked up as Cher’s high school).

This genius comedy by the Coen brothers is all about a mistaken identity. Jeff ‘The Dude” Lebowski is attacked by two goons who demand money owed by the wife of millionaire Jeffrey Lebowski (aka The Big Lebowski). This leads to him tracking down the latter and somehow getting involved in the search for said wife, who’s been kidnapped.

This movie features plenty of locations around Venice Beach and Santa Monica Boulevard. Keep your eyes peeled for The Palace Theater in Downtown LA and the now demolished Hollywood Star Lanes bowling alley.

One of my favourite movies ever (not just of the movies set in LA)! This lovely rom-com presents the story of two completely different women who, after going through some trouble in love, decide to swap homes and stay away from men for a while. And thus, wealthy movie trailer producer Amanda (Cameron Diaz) leaves her Californian villa and goes to Iris’s lovely English cottage (played by Kate Winslet).

Now, The Holiday is split between both Los Angeles and a quant town in the English countryside. As for LA, you’ll be able to see The Grill on the Alley, in Beverly Hills, and the beautiful Californian style residential areas. Amanda’s mansion, in San Marino, was designed and owned by renowned architect Wallace Neff. Miles’ house, on the other hand is located in Silver Lake and was designed by Richard Neutra.

Another rom-com film set in LA, but this time with a sentimental twist. In 500 Days of Summer, greeting-card writer Tom (Joseph Gordon-Levitt) reflects on the failed relationship with Summer (Zooey Deschanel). With ups and downs, they both have different views on love. He believes in eternal love; she, on the other hand, does not believe in boyfriends.

There are some lovely shots of Downtown LA. Some of them include the historic Bradbury Building, the Arthur J. Will Memorial Fountain in Grand Park and the “500 Days” bench in Angels Knoll park (now closed).

This XXI century silent black and white movie represents the roaring 20s splendidly. Here, silent actor George Valentin falls in love with young actress and dancer Peppy Miller. He soon finds it hard to keep both his relationship with his wife and his career, as sound in movies becomes more popular.

The Artist brings the glamour of the 1920s to live through some lovely locations dotted around Los Angeles. Some of the most notable scenes are filmed at the Bradbury Building, Los Angeles Theatre, Cicada Restaurant, the Orpheum Theater and The Ebell of Los Angeles.

A must if you love musicals! Emma Stone and Ryan Gosling star as Mia and Sebastian, an aspiring movie star and a jazz pianist who fall in love. But their relationship threatens to break as they navigate towards their respective successful careers.

La La Land opens with an iconic shot of the LA highway, and continues with moving scenes at Mt. Hollywood Drive and Griffith Observatory, Grand Central Market, Angels Flight, the “You Are The Star” mural and the Colorado Street Bridge.

Iconic restaurants and bars featured include the Smoke House Restaurant, The Lighthouse Café and Jar Restaurant.

Another of Tarantino’s movies set in Los Angeles, this time depicting the story of actor Rick Dalton (Leonardo DiCaprio) and his stunt double Cliff Booth (Brad Pitt) in their search for work in late 60s Los Angeles. Their storyline sees them interacting with Sharon Tate (Margot Robbie) and, consequently, with the members of the infamous Manson Family.

Once Upon a Time…in Hollywood film locations in Los Angeles

You’ll be spoilt for choice here! Although some of the scenes in OUATIH were filmed at the Universal Studios in Los Angeles (you see the Wild West scene set on the tour!), you can also see scenes at the Melody Ranch Studio in Santa Clarita Valley, the Paramount drive-in in South LA and the Cicada restaurant. Other iconic spots include El Coyote Mexican Cafe, Casa Vega, Musso & Frank Grill, Fox Village Theatre, Pacific Cinema Dome and the Playboy Mansion.

As for Dalton’s luxury villa, it’s located in Studio City (as opposed to Cielo Drive in Benedict Canyon).

I couldn’t write our best movies set in Los Angeles post without adding a checklist here as well, could I? To print your checklist, just click on the image and save.

Let us know if you watch any of the movies in the post or if there are any movies set in LA that we’ve missed! 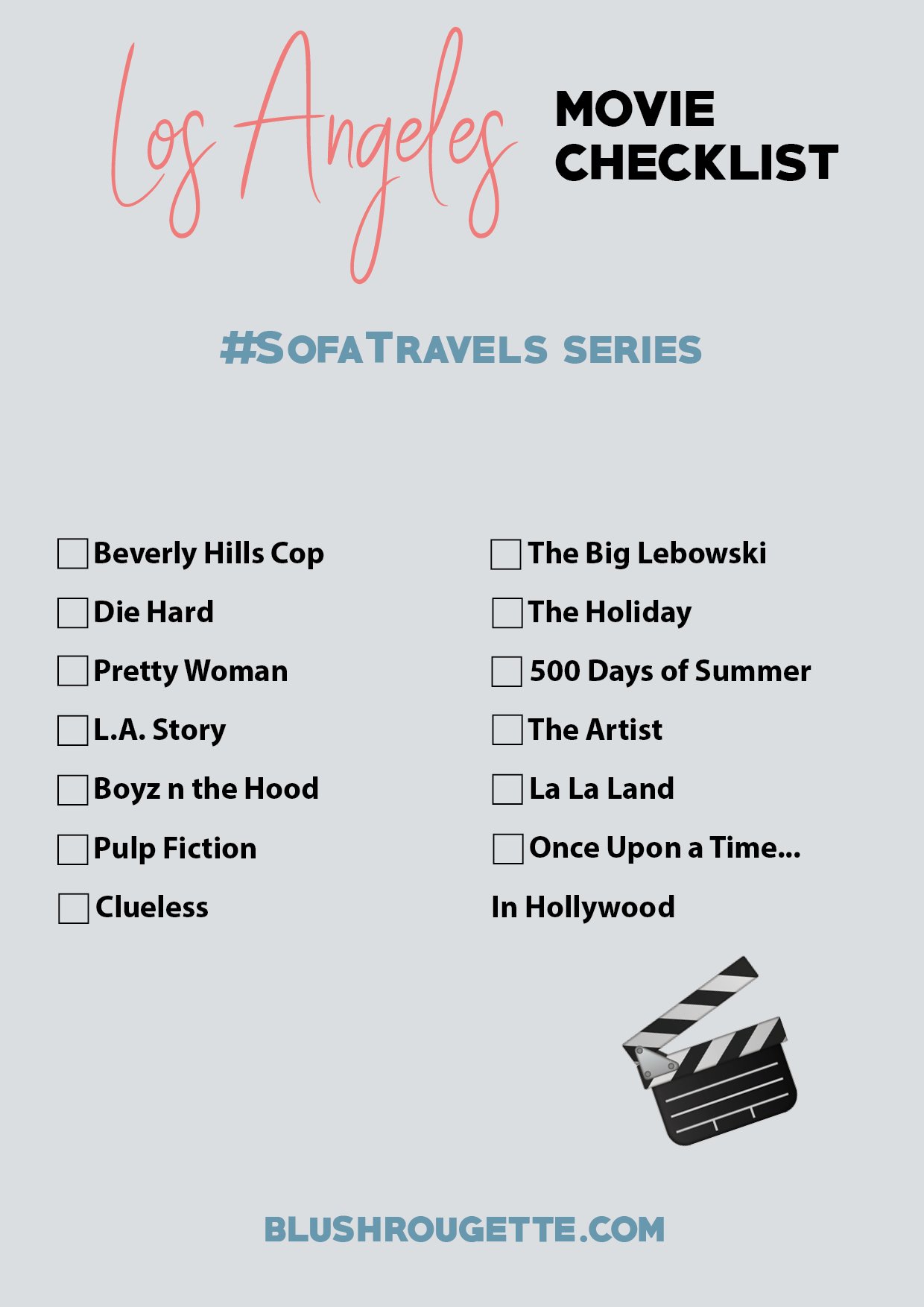