As the world stays indoors for a while, Sofa Travels is here to bring the world to you! This time, we’re focusing on the best movies set in London. I should probably warn you (in a good way) – there’s a lot of Hugh Grant in this list. A lot. Not surprisingly, the British actor has starred in some of the best British movies from the 90s and early 00s, so you know you’re in for a good one.

Without too much waffle, here are the best movies set in London in chronological order. Remember to use the hashtag #SofaTravels to let us know you’re joining the movement, or to just simply share other movies to watch. Have fun!

A rom-com starring Hugh Grant as Charles, an Englishman who falls for an American lady at a wedding. He continues to see her over a handful of events (four weddings and a funeral to be precise) and is determined to make it work with her.

Four Weddings and a Funeral film locations in London

There are some lovely shots of St Bartholomew’s Church in Smithfield and the Old Royal Naval College Chapel in Greenwich. Charles flat is also located in 22 Highbury Terrace, close to Highbury Fields.

Another of Hugh Grant’s romantic comedies set in London! This time, he’s a bookshop owner (Will) who falls for a famous American actress (Anna, played by Julia Roberts). But will they go past their different lifestyles to make their relationship work?

This movie features plenty of locations around Notting Hill (naturally). Keep an eye out for Portobello Road Market, The Print Room (aka Coronet Theatre) and The Ritz.

The Notting Hill blue door address is 280 Westbourne Park Road (Will’s house), and his bookshop is at 142 Portobello Road. And, if you’re a Japanese food lover, don’t miss Nobu Restaurant (chosen for Will and Anna’s date).

A comedy/crime thriller movie set in London with two main plots. The first one is about an illegal boxing match gone wrong that leaves a boxing promoter in debt with a pig-breeding gangster; the second, about a stolen diamond!

Rather than including shots of well known areas in London, Snatch focuses on pubs and premises around Holborn (Ye Olde Mitre tavern), Bethnal Green (Town Hall) and West Ealing.

A classic film set in London, Bridget is a single woman in her 30s who decides to change her life and keep a diary about it. This includes taking control of her sex life, food, exercise and career. But she soon has to choose between a relationship with: a) her very handsome but pretty much a ‘fuckboy’ boss (you guessed it, Hugh Grant) and b) the “rude” barrister Mark Darcy, the son of her parents’ friends. If you, like me, love a bit of Bridget, I personally recommend completing the trilogy with Bridget Jones: The Edge of Reason (2004) and Bridget Jones’s Baby (2016). As a bonus, all the movies are set in London too!

Bridget’s quirky flat is located above The Globe Tavern, on Bedale Street. Other scenes were shot in Borough Market, the Institute of Contemporary Arts (ICA) and the Royal Courts of Justice. Food lovers, keep your eyes peeled for Momo restaurant (which we can recommend)!

And if you’re looking for the spot of Bridget and Mark’s first kiss, I’m sorry to tell you it’s not around the corner from Bedale Street. You actually need to go all the way to The City, to Royal Exchange Buildings to be precise.

It’s time for Hugh Grant, again. “About a Boy” tells the story of a single, child-free Londoner (Grant) who invents an imaginary son to attend parent meetings and get with women. However, he becomes friends with a 12 year-old (Nicholas Hoult) with school problems instead.

About a Boy film locations in London

The movie is filmed all across Clerkenwell, Kentish Town and Notting Hill. Michelin star restaurant Hakkasan is also featured!

This post-apocalyptic horror movie might not sound so dystopian anymore. 28 Days later reflects on the disasters left after the mass spread of a “Rage” virus, leaving people in a zombie-like state. But there are some survivors, including Jim (Cillian Murphy), who fight for safety in a desolated London.

28 Days later provides splendid empty views of the London skyline and city streets. I’m sure you’ve seen the scene of Jim walking across Westminster Bridge towards the Houses of Parliament which has become a meme. Other scenes feature Horse Guards Parade, the Bank of England, Piccadilly Circus, St Thomas Hospital, Deptford and St Anne’s Limehouse.

Another Hugh Grant romcom (the last one, I promise!). This must-watch Christmas movie, set in London (partly), brings nine intertwined stories to the table with one thing in common: love! And of course, the Christmas spirit!

There are plenty of pretty good shots of areas around London at Christmas. Some of these are St Lukes Mews in Notting Hill, the ice rink at Somerset House, department stores such as Selfridges and Whiteley’s, 10 Downing Street, Heathrow airport, the Oxo Tower Wharf and the South Bank.

V for Vendetta tells the story of a political fighter (Hugo Weaving) who uses terrorist tactics to fight the post-war, fascist Britain of the 2030’s. His signature characteristic: wearing a Guy Fawkes mask to hide his identity. Natalie Portman stars as his main ally.

The movie includes plenty of street shots around London, such as Islington and Smithfield. Other locations include the ad screens in Piccadilly Circus, Farringdon station, Trafalgar Square and Parliament Square.

A great film adaptation of Arthur Conan Doyle’s classic! Robert Downey Jr is Sherlock Holmes, a private detective who tries to solve series of murders in London with the help of his sidekick Dr Watson (Jude Law). If you are a fan of Holmes and his adventures, I recommend you also watch its sequel – Sherlock Holmes: A Game of Shadows (2011).

Naturally, the film’s set in Victorian London, so it’s a bit different from how it currently looks! Although some scenes were shot in Liverpool and Manchester, you can spot the interior of St Paul’s Cathedral, Great St Bart’s church and Brompton Cemetery. Also, keep an eye out for Westminster Bridge (with the Elizabeth Tower and Big Ben in the background).

Prince Albert (Colin Firth) seeks the help of Australian speech therapist Lionel Logue (Geoffrey Rush) to overcome his stammer and the two gradually become great friends. But after ascending the throne as King George VI, he needs his help even more to be able to communicate effectively and lead the country through WWII. Logue has, let’s say, some unconventional ways to treat his patients!

There are some regal views of Regent’s Park, Lancaster House (posing as Buckingham Palace) and the Livery Hall of the Draper’s Hall. However, locations outside London were used to film the scenes at the Old Wembley Stadium (demolished in 2002) and the coronation at Westminster Abbey.

Daniel Craig is back for the 23rd movie (!!!) of the James Bond series. The story centres around an attack on MI6 and a vendetta against M from a former field agent that tries to kill her.

Although not exclusively set in London (the Bond movies are known for taking us all over the globe!), there are some great shots of the British capital. Scenes of the MI6’s secret HQ were actually shot inside the Old Vic tunnels underneath Waterloo station. You can also spot the National Gallery, the Old Royal Naval College, Parliament Square and an overview of the London skyline. Most of the Shanghai scenes were also filmed in London (the Virgin Active Riverside Club in Canary Wharf is the setting for a hotel rooftop pool).

A romcom with a fantasy ingredient! In About Time, the men in the Lake family can travel through time. When James (Bill Nighty) shares the secret with his son Tim (Domhnall Gleeson), he decides to get a girlfriend and meets Mary (Rachel McAdams). But Tim realises he can’t change history or solve the problems his loved ones face.

About Time film locations in London

Although the Lake family’s house is set Cornwall, there are plenty of scenes shot in London. These include the quirky restaurant Dans le Noir? (where diners eat and drink in the dark, served by blind waiters! It’s also on my London Bucket List), the Old Vic Theatre, the National Theatre and the South Bank.

Paddington tells the story of a talking bear (read: amazing!) who is forced to emigrate to England after an earthquake destroys his home in Peru. He’s soon adopted by the Browns, who decide to call him “Paddington” in honour of the London train station they find him in. A fun family movie that both young and old will enjoy (Sam certainly is a fan!). There’s also Paddington 2 (2017) which is another movie set in London and sees a series of clues hidden within many of London’s famous landmarks.

Scenes showing off London are mostly set in West London and include, of course, Paddington train station, Notting Hill, buzzing Portobello Market and Alice’s Antiques shop in Portobello Road (mocked up as Mr Gruber’s shop). Not to mention the iconic Natural History Museum (a must for everyone visiting London!).

Other tube stations featured in the film include Maida Vale (as the fictional Westbourne Oak station), Charring Cross and St John’s Wood.

Harry Potter: The Boy Who Lived, The Chosen One. The magical story of the Boy Wizard created by JK Rowling has made the entire world fall in love with magic, potions and an infinite list of fantastic creatures. Although Hogwarts itself is said to be located in Scotland (shhh, it’s a secret), there are plenty of London based locations throughout the 8 movies that are worth mentioning!

The most famous London locations are of course St Pancras International and King’s Cross station (where you can catch the Hogwarts Express from). You can actually go to the real Platform 9 ¾ and there’s even a Harry Potter shop at King’s Cross station!

Other parts of the films set in London include the London Zoo’s reptile house (where Harry discovers he can speak Parseltongue), the Leaky Couldron (in reality, an optician in Leadenhall Market) and the Millennium Bridge (destroyed in the Half Blood Prince).

Also, the glorious Australian marble interior of the Australia House on the Strand was used to film the Gringotts Bank scenes in Harry Potter and the Philosopher’s Stone.

I couldn’t write our best movies set in London post without adding a checklist here as well, could I? To print your checklist, just click on the image and save.

Let us know if you watch any of the movies in the post or if there are any movies set in London that we’ve missed! 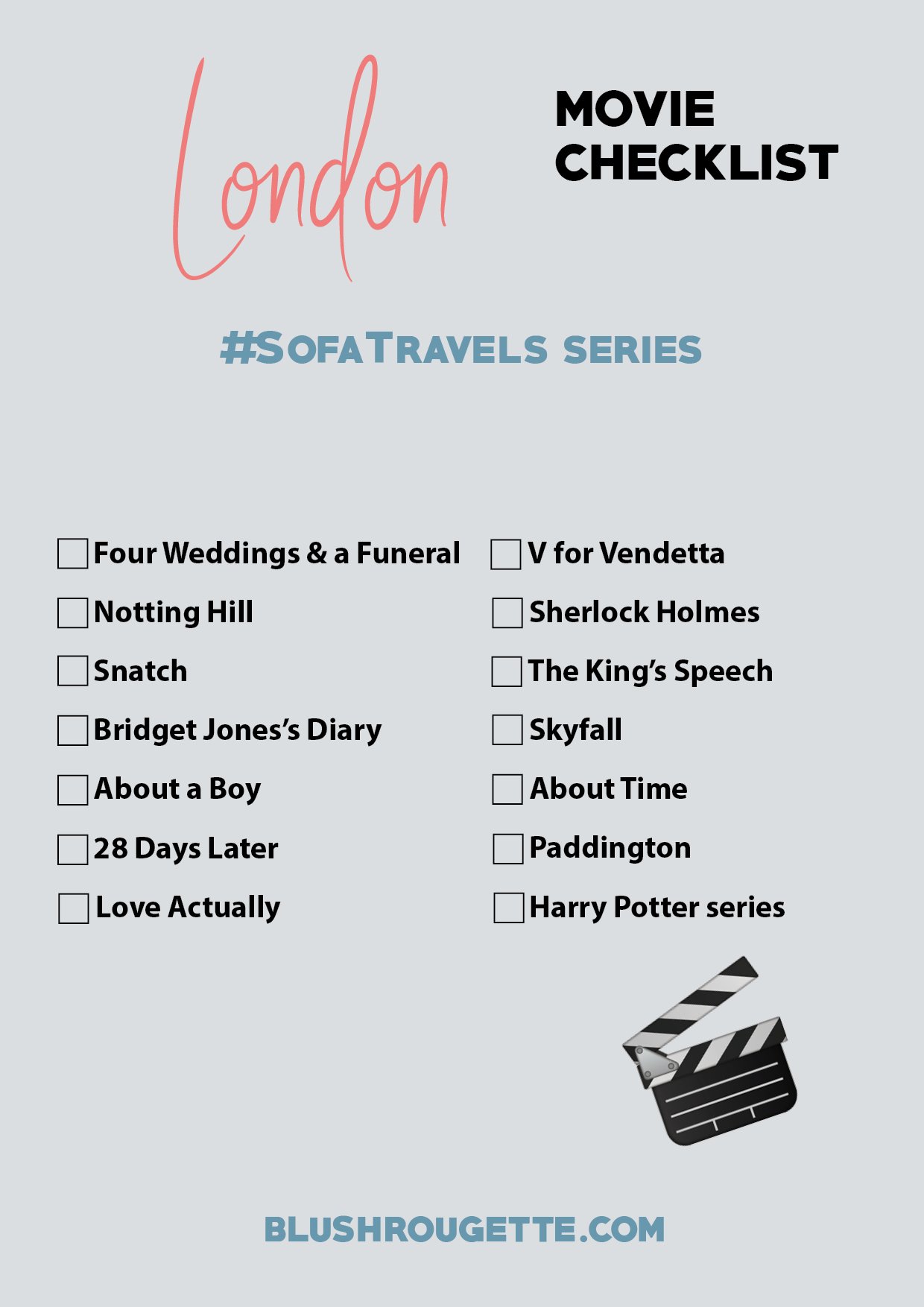 Letting this picture speak for itself - I really r

I like it here. Just you and me, the way Robin Wil

Throwback to spending the most romantic day of the